This guided for Dragon Age: Inquisition is a sheer mine for knowledge on this RPG game, developed by BioWare. This guide has been divided into three extensive parts. The first part of the guide constitutes a strategy guide. Its basic assumption is to acquaint you with all the key elements of the game, thanks to which it is going to be easier, for you, to start your adventure with Dragon Age: Inquisition. The guide encompasses useful information on the creation and development of your character, obtaining new allies and commanding the party, conducting combat conducting conversations, closing the rifts and managing the Inquisition. Apart from that, the guide offers answers to the most frequently asked questions, which will help you solve most common problems.

The second part of this guide constitutes a thorough walkthrough for all the quests available in the game. This, above all, means the quests that you perform within the framework of the game's storyline, although it also includes the walkthroughs for the quests connected with party members and minor tasks. The walkthrough takes into account all the possible choices and points out the consequences of those choices . Apart from that, the walkthrough has been enriched with maps of the locations in which you complete the quests.

The final, third, part of this guide is a vast world atlas. The majority of the atlas has been devoted to high-resolution maps that have been marked appropriately. Successive maps have been marked for the most valuable loot, whereabouts of collectibles or vantage points. The rest of the world atlas comprises, among others, of the chapters on crafting (upgrades, schemes, alchemical ingredients, recipes and so forth), merchants, opponents that you encounter, trainers or the best of the items available in the game. Dragon Age: Inquisition is the third installment of the popular RPG series, which is a continuation of the events of Dragon Age: Origins and Dragon Age II. In the game, you control an entirely different character, although you are going to meet the characters known from the previous installments, during your journey.

The three main parts of this official guide to Dragon Age: Inquisition include: 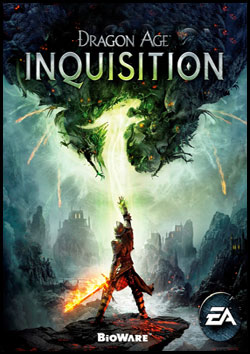 Dragon Age: Inquisition is the third installment in the series of role-playing games developed by BioWare. Under pressure of the fans, many of whom were dissatisfied with numerous aspects of Dragon Age II, the developer decided to liken the game to the first part of the trilogy. At the same time, it retains some solutions that have worked in the “second one”, and introduces a handful of novelties.
Dragon Age: Inquisition takes the player yet again to the world of Thedas which after the events of the previous two games has plunged into chaos. The action begins 10 years after the finale of Dragon Age: Origins. Kingdom of Ferelden did not manage to regain full strength after the invasion of Darkspawn (Blight), which was the main theme of Origins, and Orlais is embroiled in a civil war. Meanwhile, mages and Templars are battling all over the continent. Amid this fuss a tear in the border between the realm of mortals and the Fade is created, leading to the invasion of demons. This new threat is to be faced by the politically independent Inquisition.
The players assume the role of the leader of this organization, and their mission is to discover the identity of the person responsible for bringing demons into the world of the living, and to gather enough power to stop the invasion. Character creator not only offers choosing the class (warrior, rogue, mage), gender, the appearance, and the name of the protagonist but also the race (human, elf, dwarf, and qunari). The protagonist is fully voiced.
The main character is accompanied by companions, some of which appeared in the previous installments of the series (e.g. Varric). Not only do they provide invaluable help during combat, but they are also an important part of the story. By talking with them, the player learns their history, motives and goals. What's more, PC’s actions affect how the companions perceive him/her. Romances, which are characteristic of Dragon Age series, are also a very important part of the relationship with the companions. It is also noteworthy that the developers of Inquisition set themselves the goal of showing the interpersonal relationships in a more natural and mature way, which is reflected mainly in modernized sex scenes.
The player often faces moral decisions in which the traditional distinction between good and evil does not work. Some of them are important to the plot and their consequences are not always immediately visible. The possibility of importing saved games allows the Dragon Age veterans to transfer a part of the decisions they made in the previous installment of the series. The people who, in turn, do not have any experience with Dragon Age, and would also like to outline their own history of the world and its inhabitants, can take advantage of the Dragon Age Keep website which was prepared on the occasion of Dragon Age: Inquisition launch and enables the players to generate a customized game save to import.
Apart from the main plot, the player performs side missions and addresses smaller conflicts occurring in Thedas. As the Inquisitor, he or she makes decisions on behalf of the entire organization and thus shaping its reputation and policies towards other groups. Progress in the game not only leads to character development, but also the growing importance of the eponymous Inquisition. Moreover, higher standing gives tangible benefits; for example, an army which can be sent to conquer an impregnable fortress hiding important information. Establishing bridgeheads is a crucial thing, usually in the form of fortresses, in areas of particular importance in order to gain influence and control over the region. What is more, nothing stops the player from expanding his or her keeps and direct their activities (e.g. researches conducted) by managing available human resources.

Everything You Need to Know About Dragon Age: Inquisition

In this article we gathered the most important information about Dragon Age: Inquisition.