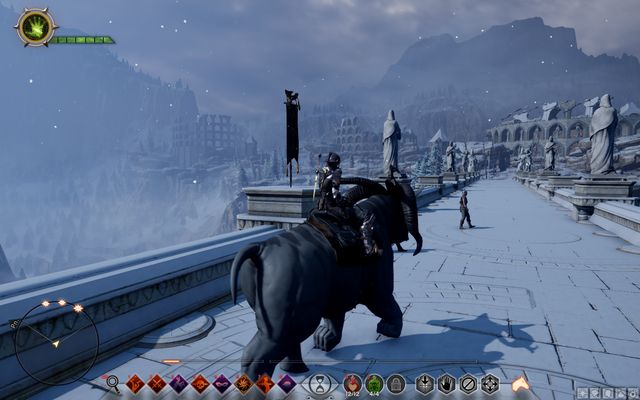 The view onto the three Coliseums- dragon breeding grounds

At the Suledin keep, you find Baron Edouard Desjardins (M15,14). From him, you will receive a quest to secure the passage in the Eastern part of Emprise du Lion, once the bridge is fixed. It is one of the most difficult side quests in the game, as it requires you to eliminate three dragons of varying difficulty levels, in three Coliseums. The most powerful dragon is at level 23 so, you need to be well prepared if you want to complete this quest. 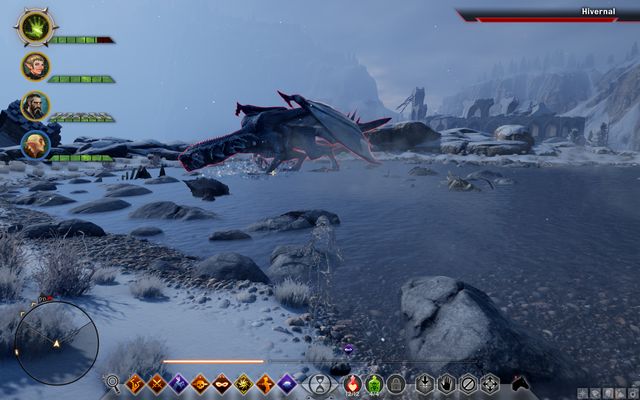 There are three dragons to defeat: the first one at level 19, ice type. To defeat this one, use fire as much as possible. Every 1/5 of his health that you deplete, he launches into the air and casts ice balls. Once his health level drops to approximately half, he will start summoning dragonlings to his aid.

The second dragon: at level 21, as above - ice type. This one also attacks from above and summons dragonlings. Moreover, he will be activating a protective shield very often.

The third one is a fire dragon, at level 23. He is quite vulnerable to poisons as well as the power of the Fade. The dragon has lots of health points and occasionally, he performs a quite specific attack: circles will appear around each of the characters, and if they don't leave the circles fast, the characters will receive severe burns when they erupt in fire. This dragon does not fly, but he also summons dragonlings. Very often, the dragon activates a magic shield. It is best not to attack the dragon, if your experience level is not equal to or higher than the dragon's level.

Rewards for completing the quest (chunks of it are awarded to you after you kill each dragon):