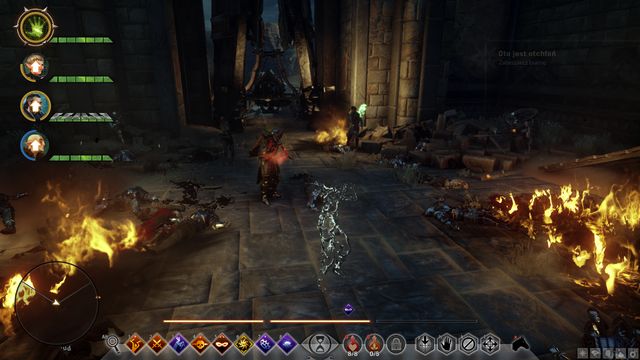 The Adamant Fortress is one of the locations that you visit during the "Here Lies the Abyss" main quest, along with the Fade that you get to, after you complete the quests at the Fortress. You start this quest during the siege of the fortress, as a passer-by. The main sides to the conflict are the Red Templars and Gray Wardens - you can either side with the Wardens or kill them all - you will have to take this decision before you get to the Fade. There, you fight against spiders, wraiths and sometimes, Demons of Pride. Sometimes, you will also have to pick the memories dropped by the wraiths, to be able to continue on your path. Finally, you are also going to fight the boss.

The way to unlock the location: With your progress into the campaign, after you complete "Here Lies the Abyss", which costs 20 Power points.

Recommended experience level: The suggested character's level is 12-15, but at the lower extremity, you may have problems defeating the final boss of the Fade so, I recommend that you exceed level 12.

1) You cannot return here so, pick all the loot as you go.

2) At the Adamant Fortress, you can either side the Wardens, or fight against them - you decide on that after you encounter the first group of combatants - you can either fight on their side or have them retreat - in such a situation, you avoid fighting.

3) In the Fade, instead of chests, there are "emerald containers" that perform the same role. You find many accessories and valuables inside so, you had better start this quest with your inventory empty.

4) Apart from the containers, there are mirrors in the Fade - find all of them, because each one raises your attributes permanently.

5) While in the Fade, note the "Fears of the Dreamers" side quest - for completing each stage, you also are rewarded with a boost to your statistics.