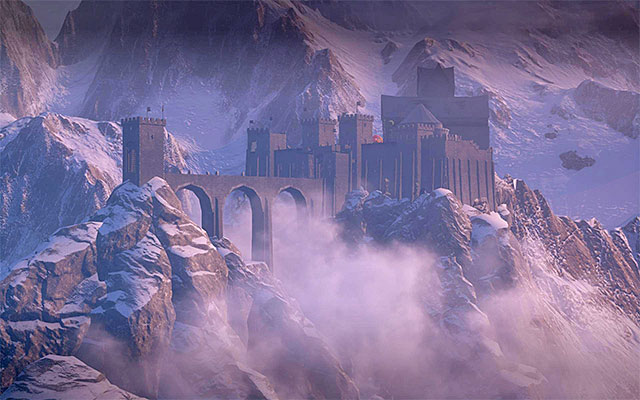 Skyhold becomes the Inquisition's HQ after the escape from Haven

Skyhold is the second main HQ for the Inquisition, and it remains one until the end of the game. The location is unavailable at the beginning of the game and it becomes available only with your progress into the storyline. Just like in the case of Haven, you do not need to worry that you run into any opponents here. You can plan on your next steps while here, without being bothered, have conversations with your companions, trade, craft and beautify the hold itself.

The way to unlock the location: Automatically, after you complete the "In Your Heart Shall Burn" main quest.

Recommended experience level: At Skyhold, you encounter no enemies.

1) Skyhold is a much bigger location than Haven and exploring all of the corners here is going take you some time. I recommend that you start your exploration only after you have spent some time at the hold, because some of the locations here (e.g. the garden or your character's quarters) are inaccessible the first time around and you will not be able to talk to all the NPCs here.

3) Unlike in the case of Haven, you can change the looks of Skyhold, and work on the shape of windows there, for example. You alter the looks of the hold while at the Undercroft. Apart from that, you can expand the fort, to a limited extent, and build, e.g. an arena there, where your warriors can train. It is possible to expand Skyhold thanks to the logging stands and quarries that you find all around the game world. To learn more, see the guide for the game.

4) I have already mentioned that all of the Inquisition members move to Skyhold. This means that you should take the same steps as you did in Haven and meet with your companions whenever possible. I recommend that you talk to them each time, after a longer journey and after each main quest that you complete. Often,. This will allow you to unlock new quests, improve on your relationships with them, or pick dialogue options that were unavailable earlier. Also, each time you return to Skyhold, visit the war room and hand over new specimen for examination (they are analyzed by Helisma) and make sure that there are no new judgments to pass, in the throne room (they have been described in the walkthrough for the game).

5) In Skyhold, there are no unique treasures, but you can collect new Codex entries. It is worth mentioning here that you get the opportunity to obtain some of them, only after you have sufficiently progressed in the storyline, e.g. after you invite new specializations trainers to Skyhold.

6) The abovementioned specializations trainers reach Skyhold after you complete the "Specializations for the Inquisitor" operation. What they specialize in depends on the character class that you initially chose for yourself. I recommend that you see all three of the trainers to unlock the quests related to them (they have been described in the walkthrough for the game). As for decisions on specializations, you can decide on them later and, after you take all of the steps within the quests that you receive.