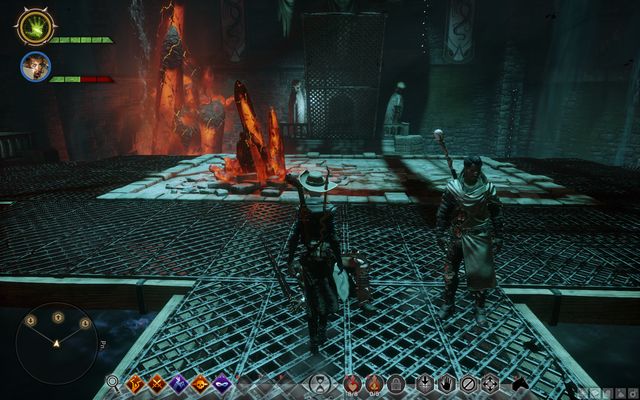 Redcliffe Castle is not too big an area, but it may seem a bit complex, at first. The location is tied to the "In Hushed Whispers" quest and it is about starting the cooperation with the mages, instead of with the Templars. At the same time, it makes it impossible for you to access Therinfal Redoubt later into the game. To get to the last chamber, you will have to free your party members from prison (the compulsory character that is helping you is Dorian), and Leliana. The, you need to collect all of the fragments of the key that fits the door to the last chamber, where you square up against the magister.

The way to unlock the location: On the war map, select the " In Hushed Whispers " operation. To start it, you require as many as 15 Power points. It should be noted here that the operation makes it impossible to complete the operation connected with winning the favor of the Templars- "Champions of the Just".

Recommended experience level: It is best to travel to the castle after you have progressed to, at least, experience level 8, thanks to which you will have little problems defeating the head mage in this location. Also, fighting against the regular opponents may prove quite difficult, at times.

1) Traveling to Redcliffe Castle determines your further path in the storyline - the alliance with the mages makes it impossible, for you, to ally yourself with the Templars and to travel to the Therinfal Redoubt.

2) You take the successive steps in a linear fashion, but they have been divided into four stages: free your allies, free Leliana, seal the rift in the main chamber and collect the key fragments, defeat the magister. Only within this division, are you allowed freedom, when it comes to the order of steps that you take.

3) After you have completed the entire quest, you will not be able to return to the castle! This is why you should be collecting all items and valuable on a regular basis. The best thing to do is sell all of the items that you o not need anymore, before you start this quest, to be able to collect as many items, at the castle, as possible.