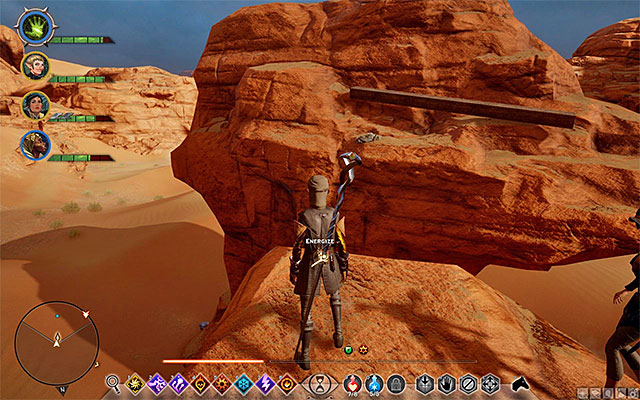 In the Western approach, you can see many interesting places

The Western Approach is one of the larger locations in the game. In theory, you explore this location during one of the main quests of the game (the "Here Lies the Abyss" quest), but it is a short visit and it only consists of a major battle. Fortunately, there also are many side quests here and lots of loot to obtain (some of them in additional, smaller regions) so, I recommend that you stay here longer.

The way to unlock this location: On the war map, select "Investigate The Western Approach" operation and complete it. It is possible only if you have, at least, 8 Power points.

Recommended experience: The majority of regions in the Western Approach can be secured by a party around level 12. You should prepare better for three expeditions - assault on the Griffon Wing Keep (a party at level 13-14 recommended , thanks to this you will easily defeat the bandit leader), a visit to the Coracavus ruins (requires you to fight a giant at level 14) and for the battle against the great dragon (the recommended level is around 15).

1) The element that makes The Western Approach different from, e.g. the Hinterlands is the option to seize the Griffon Wing Keep. By default, the keep is being occupied by bandits but, after you complete the Assault on Griffon Wing Keep side quest, it can be captured for the Inquisition and become its foothold (this additionally makes new side quests available).

2) In the Northern part of the Western Approach, there are poison fumes and a large, locked gate. Do not worry about the fact that the initially locked areas cannot be explored, because you will be able to access them later on. To learn more, see the page entitled Hidden locations.

3) In the Western Approach there is a great dragon, but you will be able to pick the exact moment, when you want to fight it. The battle takes place during one of the side quest from alchemist Frederic, whom you can find in the Southern part of the map. Descriptions of the quests from this character, and the ones connected with the dragon, can be found in the walkthrough for the game. Additionally, in the Northern part of the Western Approach (the region behind the locked gates) you encounter several giants. A weak party may have some problems defeating them but, in case of any problems, you can walk around them.