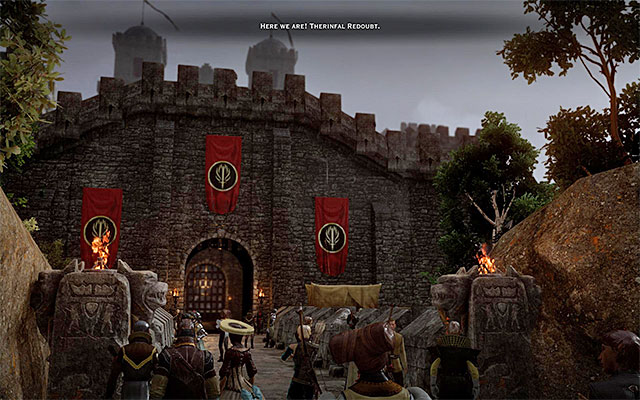 You visit the Redoubt at the main Templar city

Therinfal Redoubt is a location that is not too big, and is connected with the storyline. You can visit it while completing the "Champions of the Just" main quest, i.e. the one concerned with obtaining the support from the Templars. There are three main levels in the Redoubt and, apart from that, you will also get to explore two parts of the Nightmare. Usually, you visit all of the locations in a predefined order.

The way to unlock this location: On the war map, select the "Champions of the Just" operation. It requires you to spend, as many as, 15 Power points. Also, it should be mentioned that this operation makes it impossible to obtain the support of the Rebel Mages- in "In Hushed Whispers".

Recommended experience: It is best to travel to the redoubt only after you have reached the eighth experience level , at least, because this is the level of the final opponent in this location. The fights against standard opponents here may also be challenging, especially the one in the chamber, at the top level of the redoubt.

1) Traveling to the Therinfal Redoubt makes it impossible to travel to Castle Redcliffe (M10). This results from the potential ally that you pick (you can pick only one faction) - the Templars stay at the redoubt, whereas the mages occupy the Redcliffe Castle.

2) A very important piece of information is that you cannot return to the Therinfal Redoubt later into the game. You need to collect all of the loot on a regular basis, because it will be impossible later on (it is important that you take interest in the loot dropped by the main opponent in this location). The exploration of the Redoubt itself is, in the majority of cases, linear. The only exception is the upper level, because you can decide here about the order in which you want to explore the adjacent wings (the Northern and the Southern ones).

3) There are two parts of the Nightmare, connected with the Therinfal Redoubt. You explore them while completing the quest connected with the Templars. While in the Nightmare, you do not find any physical objects that you can take along, into the world of the living. This does not mean that you should skip the exploration of the area, because thanks to examining the inscriptions ("demonic Dogma" side quest) you raise the statistics of your character. To learn more, see the walkthrough for the game.