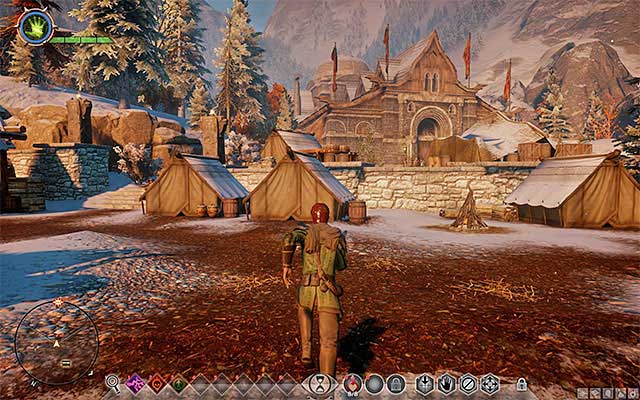 Haven is the initial field base for the Inquisition

Haven is a small village, which your party reaches automatically after you complete the prologue and leave the Frostback Mountains for the first time. From that point, the location constitutes the Inquisition's main base. This means that you encounter no opponents here. Apart from that, Haven is good for planning on your next steps, meeting new allies and crafting.

The way to unlock this location: Automatically, after you complete the prologue (the "Wrath of Heaven" main quest).

Recommended experience: In the Haven, there are no opponents. The only exception is the final main quest connected with the siege of the village- "In Your Heart Shall Burn". Do not start this quest if your party members have not progressed to, at least, experience level 11.

1) The central part of the Haven is the Chantry. It is here that the war room is located, thanks to which you can plan on the sojourns of the Inquisition (many of them are connected with the main storyline), spend your Profit points or complete operations and unlock new areas of the world. To learn more about the management of the Inquisition and using the war room, see the guide for the game.

2) Haven is where you can meet many amicable characters. First of all, these are party members, but also NPCs, who play a vital role in the game (e.g. Cullen and Leliana). I recommend that you have a longer conversation with each one of the allies, right after you reach Haven for the first time, and do that each time each time after you complete each main quest, because there is a high chance that new dialogue options become available. Note - some of the characters are not to be met in Haven from the beginning of the game. They may appear in the village only after you complete the quests connected with them, or after you progress in the storyline.

3) During your stay in Haven, you can craft and see the stock of the local traders. As for the traders, the acting pattern is similar to that of the majority of regular NPCs. Some of the traders appear in the village later into the game, after you have progressed in the storyline, or after you met specific characters in the other locations of the game world (e.g. Chargers in the Storm Coast).

4) Apart from the village, Haven encompasses the surrounding areas also. You visit those areas, mainly, while completing side quests, but you can also find logging stands here and wild animals. Apart from that, it is worth noting that you can find the approach to the Frostback Mountains there (Frostback Mountains chapter - M1 map), i.e. the location where you started the main campaign. You can take the pass if, for some reason, you want to visit that location again.

5) In Haven, there are no secret, difficult-to-access areas, although you are not free to visit every location straight away. In the Chantry basement, there are dungeons with several cells on the sides, where many of them are locked, at first. If your character is a rogue, you can pick the locks on the cells. Otherwise, wait for Sera to join your party and talk to her, to learn that she has opened the cells, which allows you to access them.

6) Haven does not remain the Inquisition's HQ until the end of the game- I remains one up until you start the "In your Heart Shall Burn" main quest. As a result of this quest, Haven is buried by an avalanche and the HQ is moved to Skyhold. Therefore, do not start this quest if you are not ready. This mainly means that your party needs to be at an appropriate level (the recommended experience level is 11, or higher), but you also need to make sure that you have completed side quests connected with Haven, or they will be lost forever. Fortunately, you do not need to worry about the quests of the remaining groups (including the ones tasked to you by your party members), because they remain in your log, after you move to Skyhold.

7) During the quest of the Haven attack, mentioned in 6), you get an opportunity to save some of the NPCs that you have met earlier, e.g. the trader or the blacksmith. Do not worry if you fail to do that, because this will not disable any of the interactions at Skyhold. What is even more, some of the allies (e.g. traders) will be replaced by other NPCs, even if you save them.