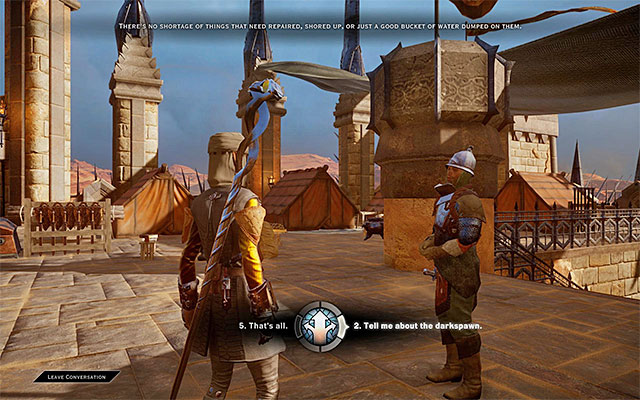 Quest can be unlocked after taking over the Griffon Wing Keep to the west of The Western Approach - it becomes available after completing the "Assault on Griffon Wing Keep" quest. Look for the Knight-Captain Rylen (M19,9) and listen to his report concerning the darkspawns. You will have to investigate the case closely. 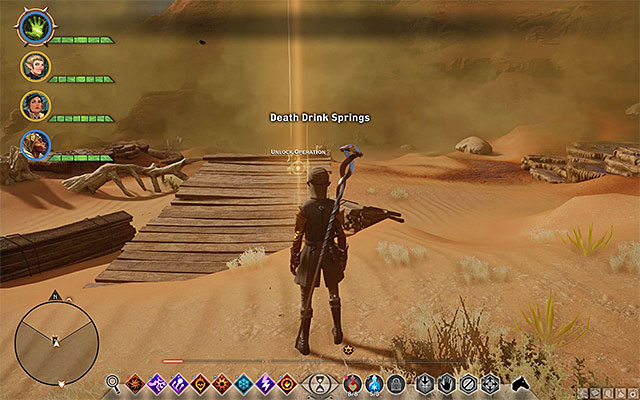 Exit the keep and head South-West. You have to get to the Death Drink Springs, where the poisonous gas will prevent any further exploration. Locate an interactive point depicted above (M19,9a) and stick a flag there. It will result in unlocking a new operation, which can be performed in the war room - "Find the Source of Darkspawn". Return to the Skyhold, find this option on the map, and then use 5 Power Points for its finalization. 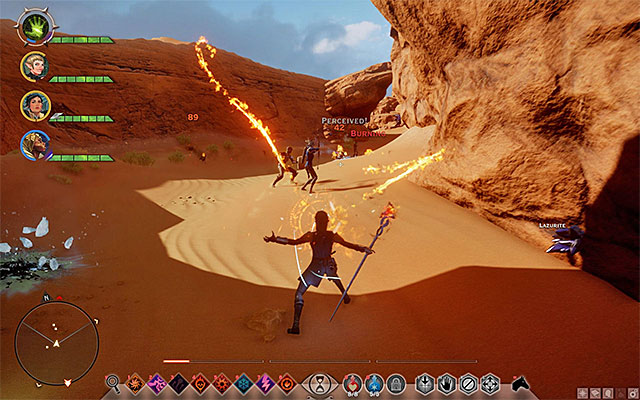 Now you can return to The Western Approach. There won't be any fumes anymore. Explore the new area (M19,9b). Eliminate all of the Darkspawns, Hurlocks and Ghouls. 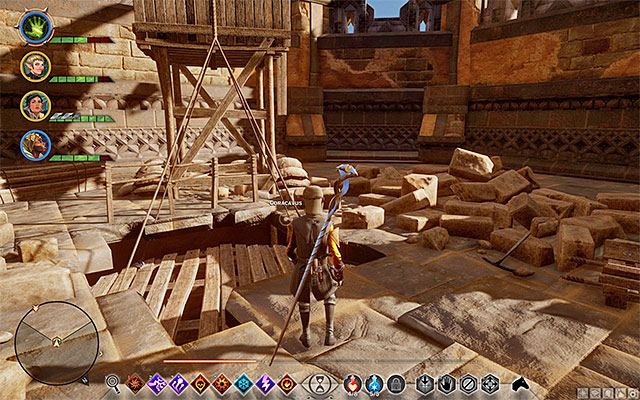 Head to the Prison Ruins. Use a ladder and approach the new group of monsters. Watch out for the Hurlock Alpha, keeping him at bay, and use your range-skilled party members. After dealing with the opponents, find the passage to the Coracavus ruins (M19,9c). 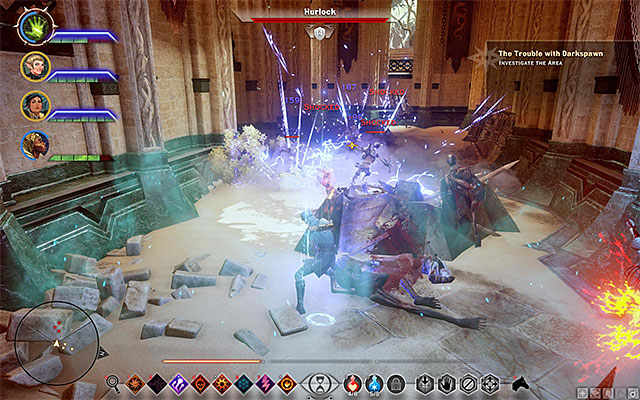 In the ruins you will have to fight more darkspawns

After eventually getting to the ruins (M23,1a), head South. The first darkspawns will approach you near the crossing. Deal with them and optionally investigate the large, eastern area (it is fully optional). If not, turn West and later South. 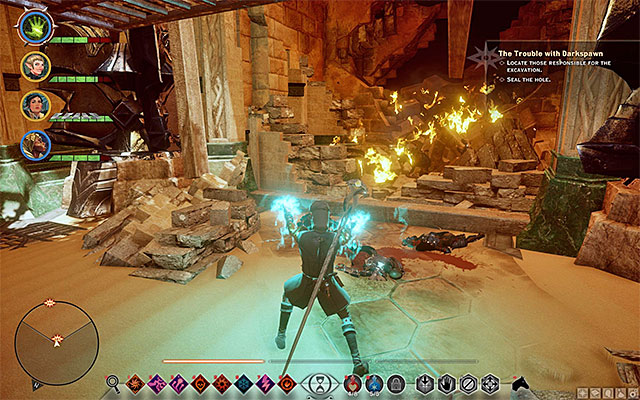 Place where you have to plug the hole.

Go South until you get yourself to the point where you will have to close a hole in the ruins (M23,1b). Use a mage in order to do so. After that, continue the exploration of the ruins. In the next room, apart from the usual darkspawns, another hurlock alpha will be waiting for you. Don't forget about investigating the area and getting a rogue to open locked rooms with some worthy treasures. 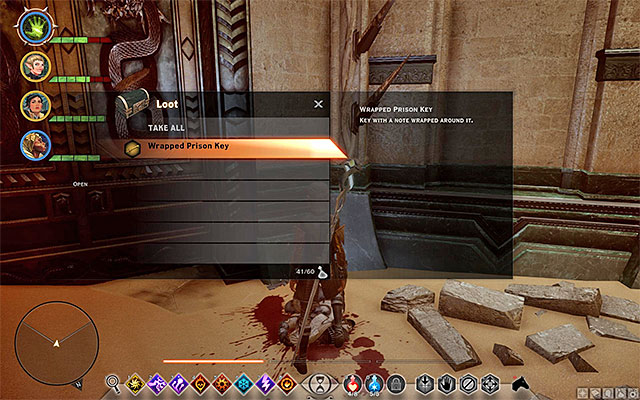 A while later, you will get to the long corridors. Look for the corpses (M23,1c) that will have a Wrapped Prison Key. Take it and head to the room South of the ruins. Save the game, as a tough fight awaits you. 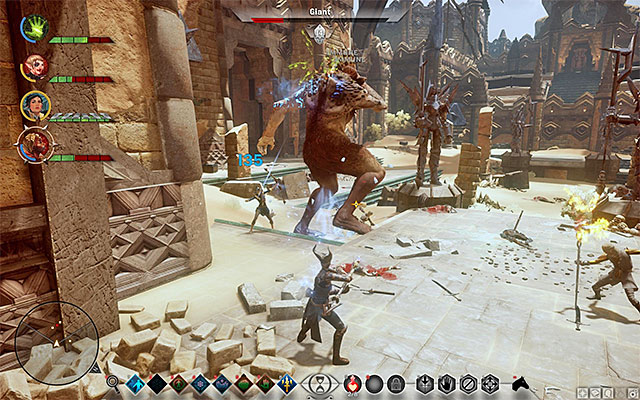 There is a giant in the room (M23,1d). If this is your first time encountering this creature, you must keep in mind to protect the weaker party members. Don't let the giant get close to them and move them away when the beast is about to throw a rock. Use the warriors to get the giant's attention. Attack the legs which will make him kneel and will decrease his mobility. After dealing with this enemy, head to the southern exit (M23,1e). 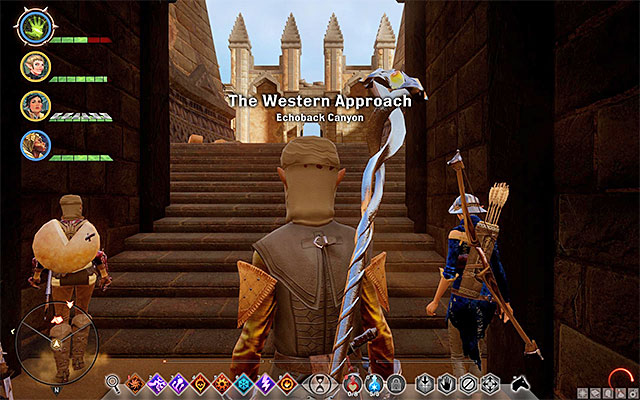 After exiting the ruins you will find yourself in the camp

After returning to The Western Approach (M19,9d) you will find yourself in a new part of the map, which is the Echoback Canyon. Go to the South-West and unlock a new camp. Watch out for the cultists and other monsters. There are also some giants wandering around. Avoid them if you don't want getting involved in a challenging fight. 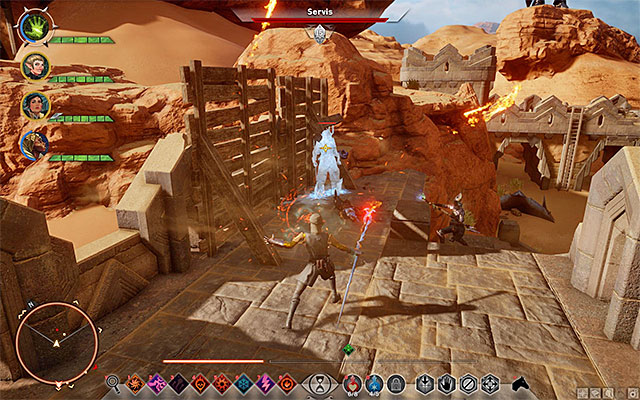 Servis arrives in the fort

Now you can return to the Echoback Fort, which can be found to the South-West from the exit (M19,9e). The fort is easily approachable from the north-western side, so that you will have walk around it a bit. Inside, find Servis and attack him. He is resistant to fire attacks. Warriors can be useful to overwhelm him and his helpers. 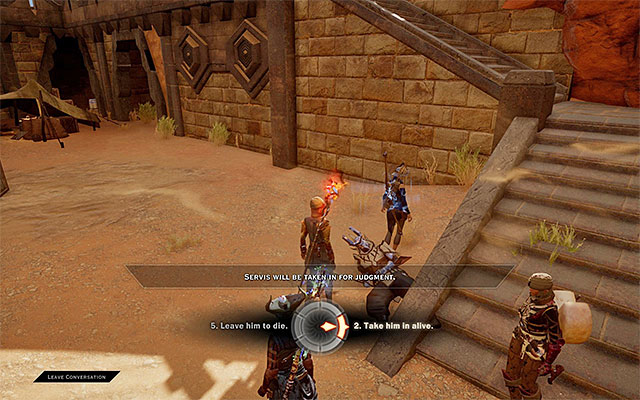 The game won't let you simply kill Servis. After getting rid of his entire health bar and defeating all of the cultists, go away from him and press the interaction button. Now you can decide whether you want to spare him or kill him. Letting him live will cause another side-quest in the Skyhold to appear.