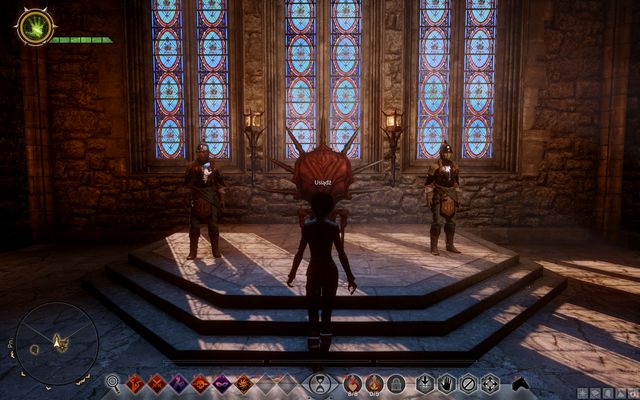 The throne that you judge from

It is a sequence of quests that supplement the main storyline. After important events, you can pass your own judgment on the convicts. Making a judgment always gives you +80 Inquisition influence, no matter what the decision is, but you can easily win your allies over, after you take the correct decisions, and also unlock new operations.

The first one to try is the Avvar chief. You need to pick one out of the three:

Alexius, your former no. 1 enemy now is subject to your judgment (you can pass the judgment only if you have earlier completed the main quest connected with the apostates). . You can pick one of four sentence options:

You can pass the judgment on the Captain only if you have earlier selected the main quest connected with the Templars. The available sentence options are:

Servis is a mage to you could meet in The Western Approach. You can judge this person only if you've completed the "The Trouble with Darkspawn" side quest and you've decided to capture Servis in the battle. You can choose one of four options:

After completing the main story and a few side quests in Emprise du Lion, gather enough evidence to judge Mistress Poulin. Your options are:

This judgment is available after you capture her in the Winter Palace during the "Wicked Eyes and Wicked Hearts" quest (read the chapter describing this quest).

After completing "Here Lies the Abyss", you will be judging Lord Erimond. There are three options to choose:

After completing "Here Lies the Abyss", you will also be judging another person connected to the rebellion. It is one of the leaders - Ruth. There are fiver options:

At the end of the plot, you will be judging Samson, defeated in the Temple of Mythal, after completing the "What Pride Had Wrought" quest. To unlock this judgment, you first have to complete the "Being Samson to Skyhold for Judgment" operation.