Way to unlock: Talk to Hawke. 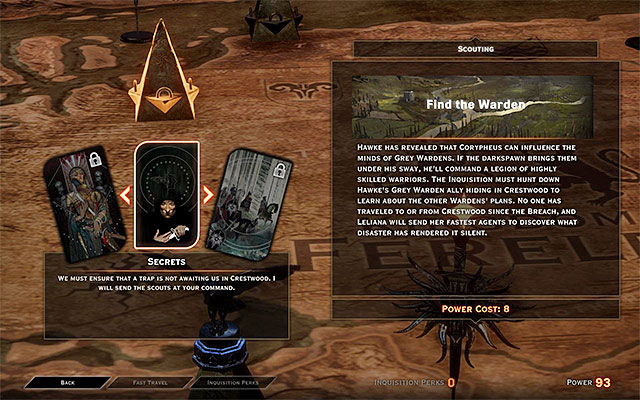 You can gain access to this quest, while completing the From the Ashes main quest. You need to talk to Varric on the ramparts (M12,8). This meeting will be participated by Gray Warden Hawke - the protagonist of the previous installment. He tasks you with this quest. The first thing that you need to do is visit the war room. Find the Find the Warden operation, on the war map. Spend 8 Power points to unlock it and confirm that you want to travel to Crestwood. 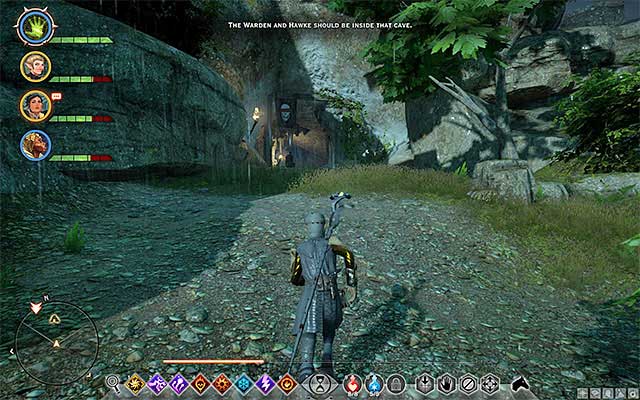 The spot where Hawke is waiting for you

After you get to Crestwood, you need to start a long walk to the South-East. Along your path, you will be attacked by the undead and highwaymen (always attack archers and elite enemies in the first place). Along your path you encounter the Gray Wardens, whom you can help eliminate monsters. Apart from that, you will most probably go past the Crestwood village and Caer Bronach, but you do not need to stop here. Your destination is the cave near the Eastern edge of the map (M13,1a), near one of the campsites that you can set. 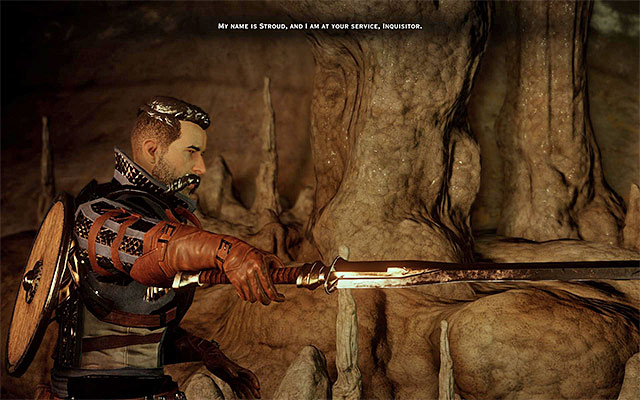 After you enter the cave, you will first meet Hawke, and walk over to the area, where there is another Gray Warden waiting - Stroud (M13,1b). You do not need to watch out, during the meeting, because the dialogue options that you pick do not play any vital role. If you want to, you can ask Stroud an additional question (it is a good idea to talk to him again, after the first conversation ends). 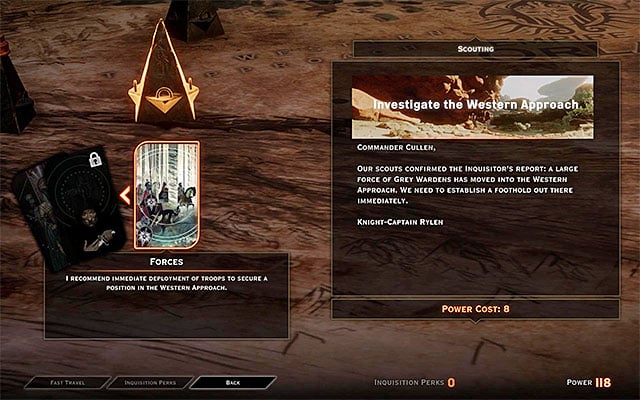 A pawn on the map, connected to the Western Approach

Now you will have to go to the Skyhold and head back to the war room. Find the 'Investigate the Western Approach' option on the map and spend eight Power Points on it. By doing this, you will unlock the entrance to The Western Approach. Go there. 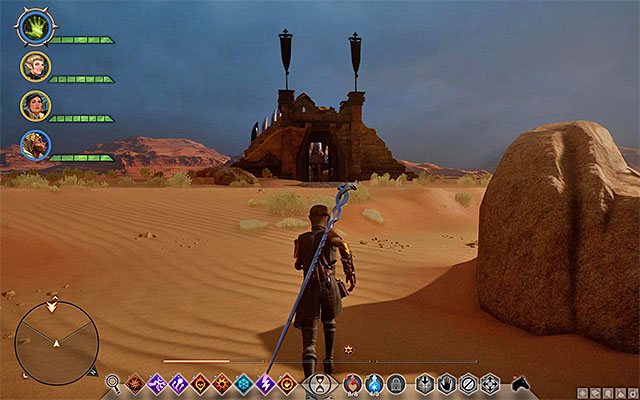 Hawke and Stroud can both be found by the bridge leading to the Ritual Tower.

After getting to The Western Approach start a long walk to the southern-west. Head to the area of the Ritual Tower (M19, 1a). There, you will have to meet with Hawke and Stroud. Wait for the cutscene depicting the entrance to the Tower (M19,1b) and the meeting with the Lord Livius Erimond. No matter which dialogue options you will chose, Erimond will flee. He will also send some monsters and enslaved Grey Wardens. 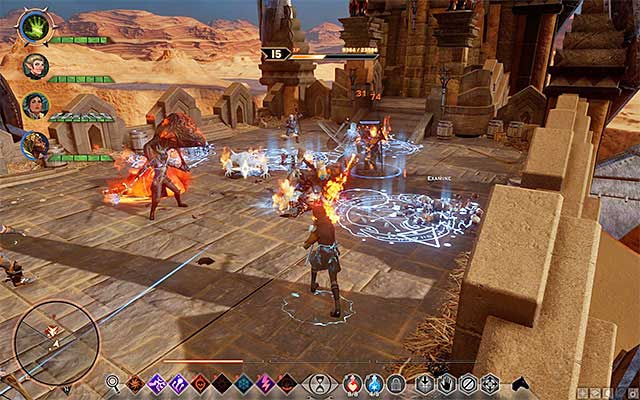 While fighting, focus on eliminating the Warden Spellbinder first (note - they are immune to the ice attacks) and send some warriors on them in order to make it harder for them to cast spells. Watch out for the rage demon, it is the best to attack him with your whole party. The smaller monster can be left for the end, as they do not present much of a problem. After dealing with all of the enemies, talk to the Hawk and Stroud. In order to continue this quest, you will have to return to the Skyhold and walk over to the council room. Here, you unlock the passage to the Adamant Fort (cost: 20 Power points), where the main part of the quest starts. 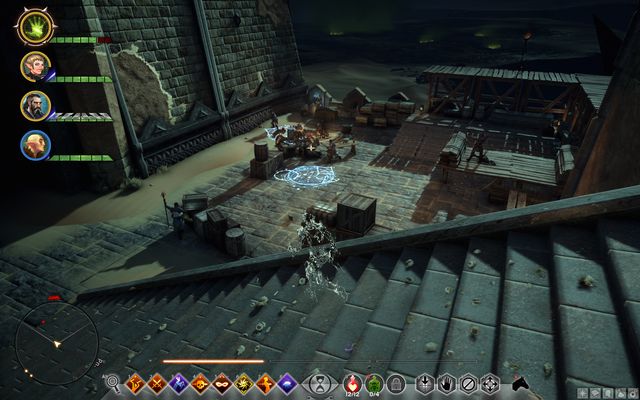 After the cutscene, you will get into the heat of the action (M27,1a) - deal with several demons and keep climbing up, over stairs. Next to the descent, you note the Grey Wardens fighting more Darkspawn (M27,1b). If you help them, you will be able to offer that they retreat, at which point they leave, but if you demand that they give up, you will have to fight them. 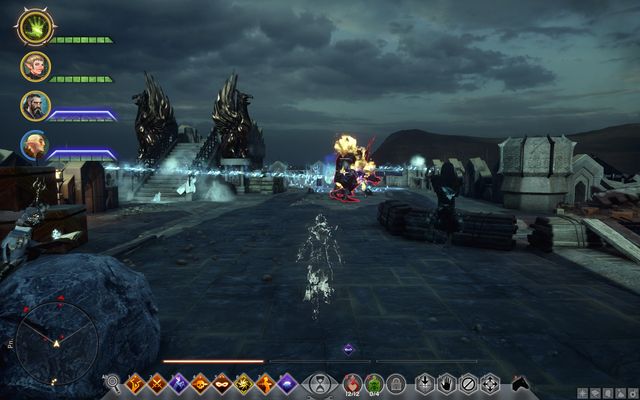 The Pride demon on the battlements

Cross the door and climb up the stairs. Now, you can complete the optional quest to clear points of besiegement. You will be able to tell them by the Wardens fighting demons, in groups. The first one is to the right, after you climb onto the battlements. (M27,1c). The remaining ones can be found, after you leave the tower behind (M27,1d), where there is the Pride demon fighting; and along the battlements to the right (M27,1e). For helping in the fights, you receive Power points and Influence points, as well as additional experience. Then, climb down the stairs. 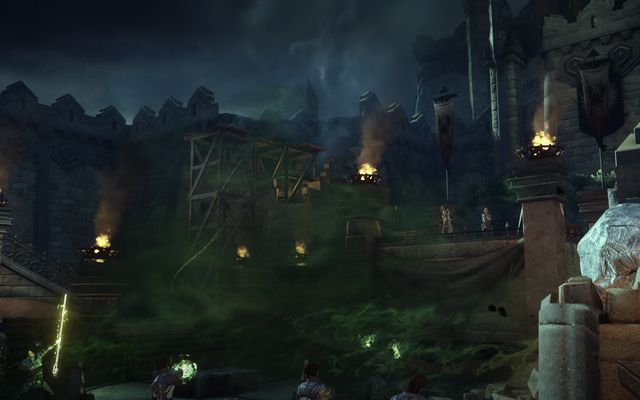 Clarel and Edimond on the fort's battlements

After you pass through the outer walls, you reach Clareel and the rest of the wardens. You will now have to make a choice: if you attack the wardens, both them and the demons will be hostile towards you. However, if you pick "I have already spared wardens" in the special menu, or if there is Blackwall on the party, there is a chance that some of the wardens will side with you (if you have talked to your party members often, you may have access to additional dialogue options). After the battle, climb up the stairs, where you see a cutscene, at the top. 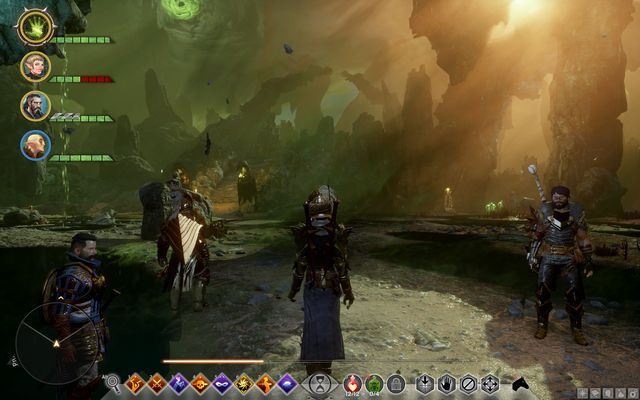 You get to the Fade (M27,1f). This place is quite unique - you are going to fight demons and spiders only, here. 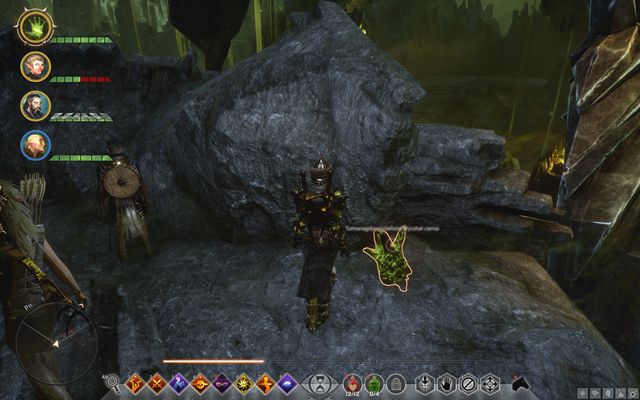 Also chests occur here as containers, the so called Emerald green shadow crystal. It is a good idea to loot them here, because they contain valuable items. 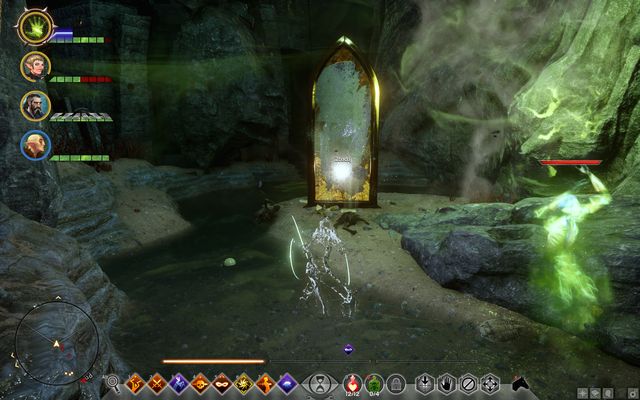 The other elements that are worth collecting are mirrors. They permanently increase an attribute of your character, after you approach them and interact with them. 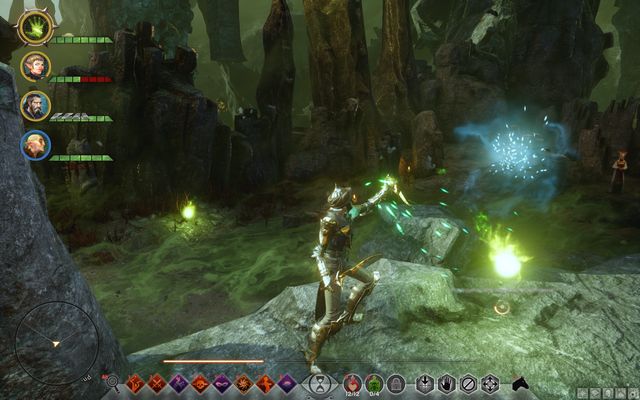 Consumption of a memory

Head upwards, where you encounter the spirit of Justynia, which you need to talk to. Then, eliminate a small group of wraiths and, where there should be their corpses, you find memories - approach each one and hold down the action button to collect them - only then, will the passage be opened. 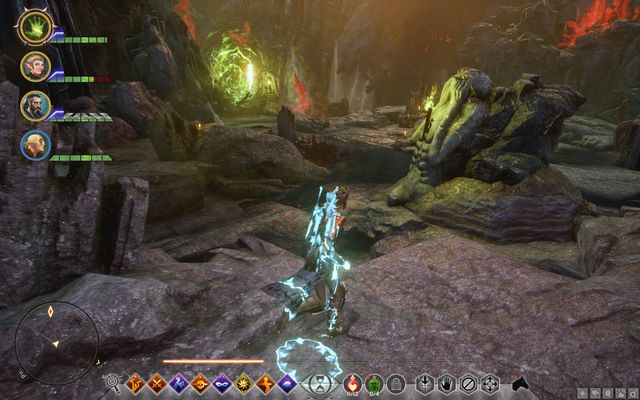 Head onwards, up until you encounter another barrier. This time, you are going to fight stronger demons and the barrier falls down, as soon as you have defeated enough of them. The number of demons that you need to defeat depends on their type, and the type is randomly generated. This is why the fighting may take a while - as a consolation, next to the stone in the center, you find a supply crate. 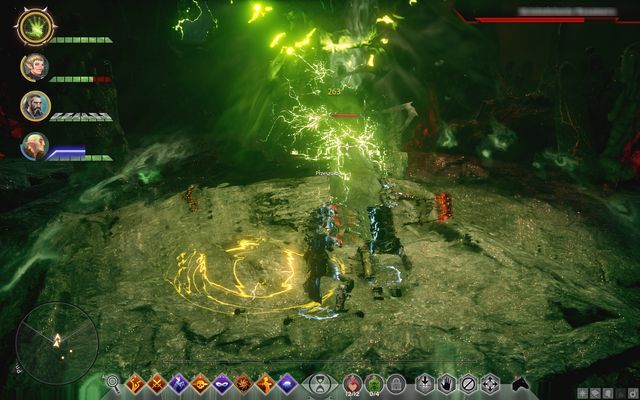 Follow the corridor and you will enter the last chamber. Here, you are going to fight the boss - Nightmare. The demon is at level 15 and he is slightly floating in the air, due to which not all blades are able to reach him. He often activates an additional magical barrier. After you deplete each 30% of his health, he summons spiders and demons to his aid, he himself becomes nearly invisible, then. Nearly, because he starts blinking then, at which point you can hit him then. He becomes visible again, after you defeat all of the summons. 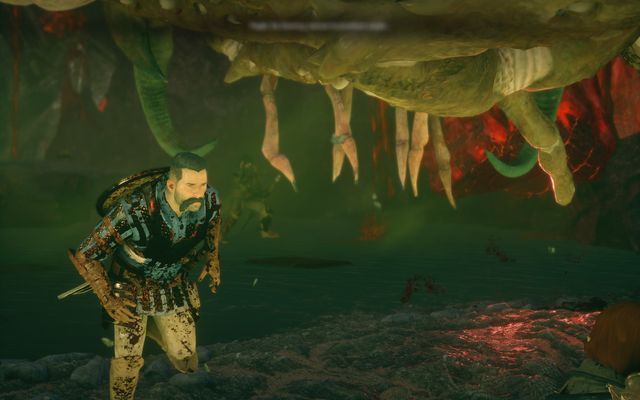 Now, you are going to face two important choices. The first one is which of the wardens is to stay behind, in the Fade, to secure the retreat of the rest of the party - Hawke or Stroud. Then, right after you leave the Fade, you will be able to either drive the Grey Wardens away, or include them in the Inquisition. Your choice determines what operations become available from the war table.

Fears of the Dreamers

Way to unlock the quest: Find a Dreamer or the item that they want, in the Fade 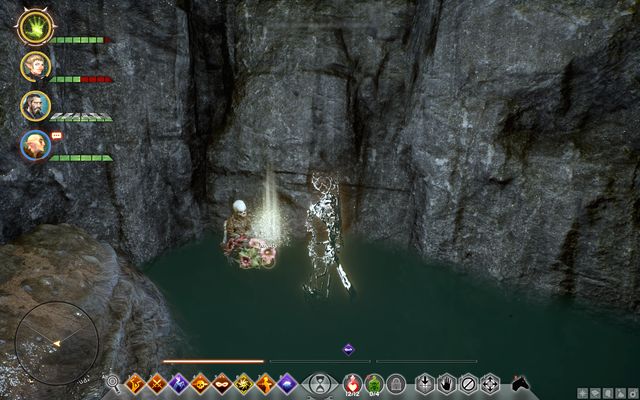 Flowers - one of the gifts for the Dreamers

The first side quest in the Fade. Your mission is to locate five Dreamers - yellow apparitions standing on various items. Each one has his requirements for the items that they want. 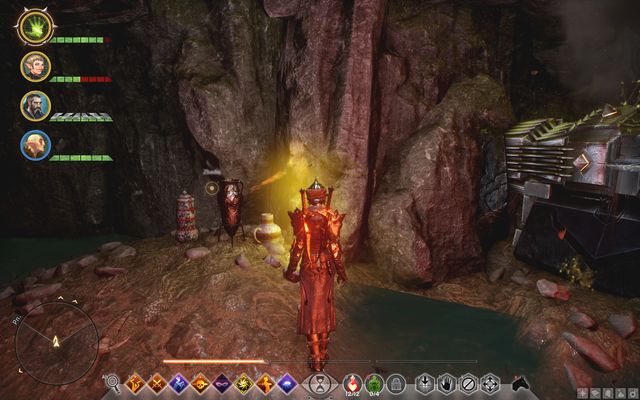 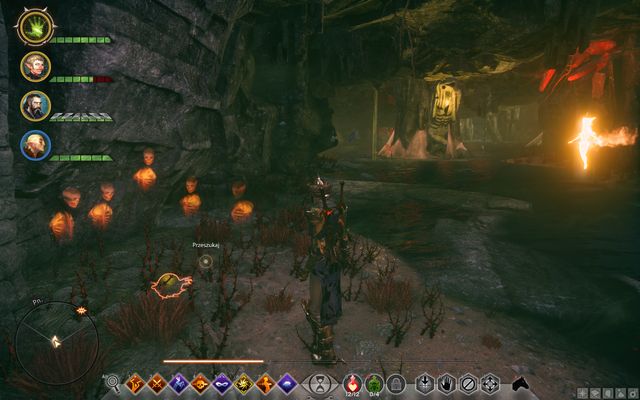 The rewards from the Dreamers

Finally, you also receive an additional reward (M27,2k) from the Dreamers which is the Essence of Perfectness - a valuable crafting material. You will be able to claim the reward after you destroy the last barrier, it is to the left, next to the rock, surrounded by Dreamers.

Way to unlock the quest: Approach the altar on the rock in the Fade. 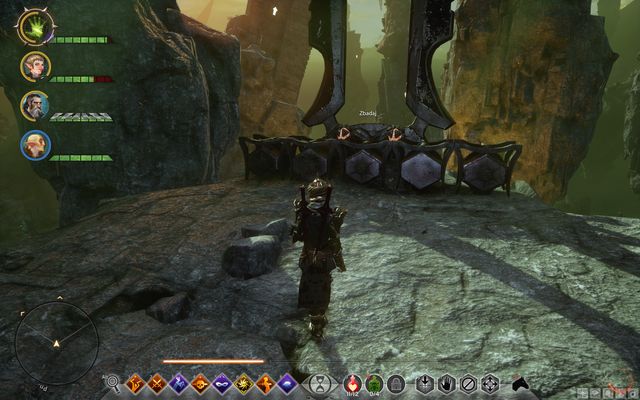 The altar in the Fade

Another side quest in Fade is very easy. On the rock, where there are two Pride Demons, there is an altar near the edge. You need to light flames there, in the correct order. The order is as follows: 4, 1, 3, 5, 2. 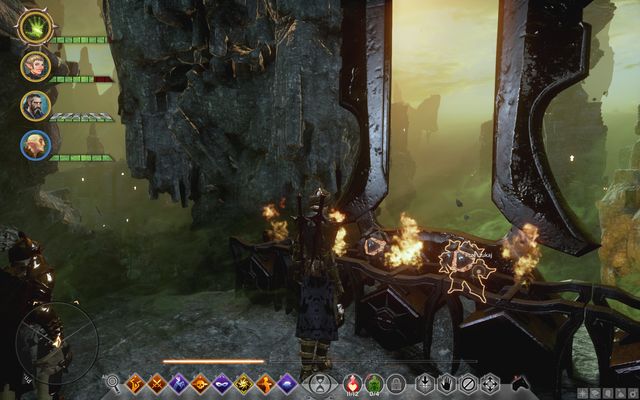 The case on the altar

After you have lit them all, you will be rewarded with experience and a case appears on the altar. Inside, there is a legendary ring and an Amulet of Power.