Way to unlock: Automatically, after you have completed the Champions of the Just or the In Hushed Whispers main quests. 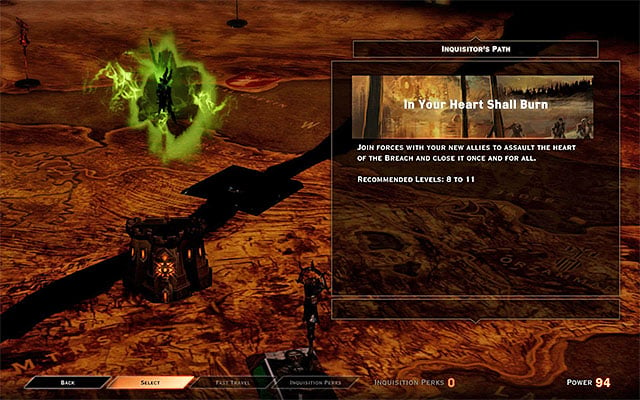 You can start this quest right after you have completed the main quest, connected with securing your favor with either the Mages or the Templars, assuming that you have, at least, one Power point. Go to the war room in Haven (M2,2) and locate the operation connected with this quest.

NOTE - before you start the quest proper, make sure that you have completed all of the side quests in Haven, because it will be impossible later on. Fortunately, you do not need to worry about your party members, because their lives will not be threatened.

Note - The party experience level that the game recommends is 8-11. I recommend that you develop all of the characters to level 11, at least, because this quest consists of many fights that are quite challenging and long (especially towards the end). 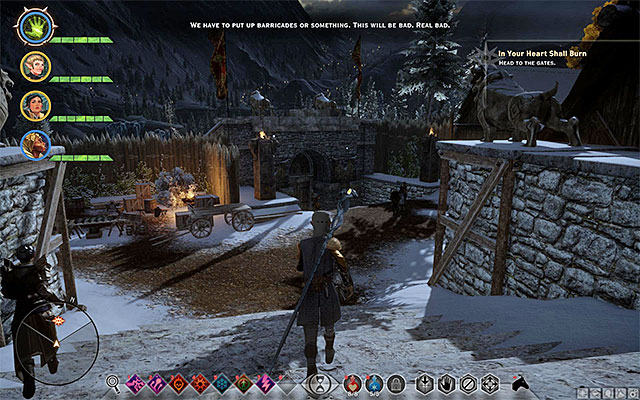 After you confirm that you want to start this quest, you will watch a longer cutscene of sealing the biggest rift. Problems appear after you return to Haven, because the enemy army will be spotted near the village. Head North, towards the Haven's main gate (M2,2a). After the gate opens, you will watch a cutscene. IF you have completed the "Champions of the Just" earlier, you encounter Dorian here and, if you have completed "In hushed Whispers" you meet Cole. From him, you learn that the army is being commanded by The Elder One. 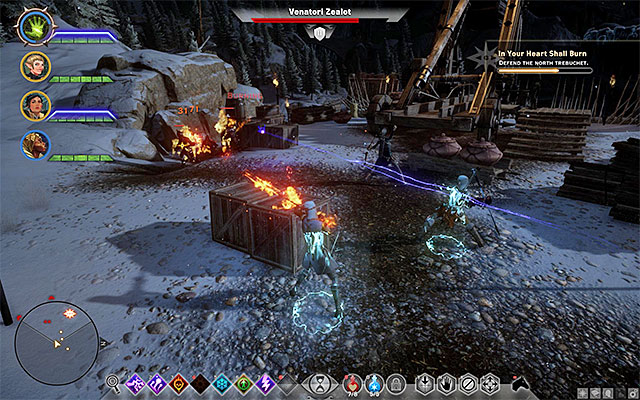 Fight near the first catapult

Your new quest is to defend the first trebuchet (M2,2b), i.e. a kind of a catapult. Approach the trebuchet and start fighting the enemy units off. If you have completed Champions of the Just, the fights will be participated by the members of the Venatori cult, and if you have completed the " In hushed Whispers " it is going to be the Red Templars. Regardless of the faction that you need to face, as usually, start by taking out the enemy archers, mages and fighters with shields. You need to keep fighting up until the moment, at which the progress bar in the upper-right corner fills up. After that, the catapult fires a projectile. 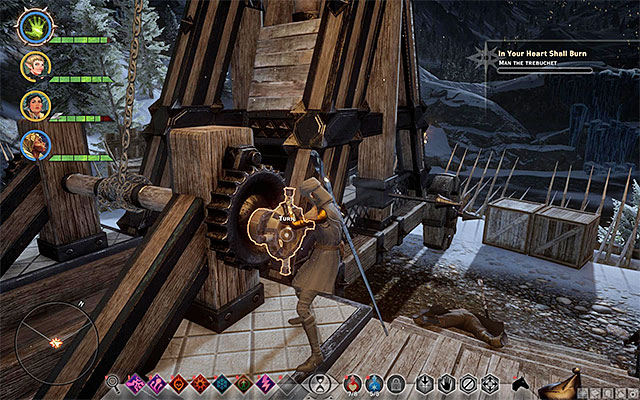 Use the mechanism of the trebuchet

Your next task is to reach another trebuchet to the West of here (M2,2c). Along your path, also consider using the Supply Cache at the main road. After you come near the trebuchet, attack the opponents, and again, watch out for the ones that pose the greatest threat. After you have cleared the area, approach the mechanism of the catapult and hold down the interaction key/button. Do not release it, up until the catapult fires the projectile. Wait for another cutscene to start and collect the supplies. 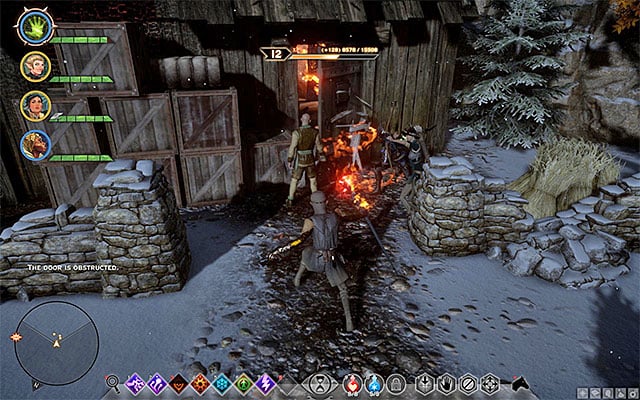 It is a good idea to help Harritt

Head back towards the main gate of Haven (M2,2a). Along your path, it is worthwhile to stop next to the former smithy (M2,2d), because you will be able to help Harritt here. You need to destroy all the crates that block the entrance into the house and the easiest way to do that is by launching a strong melee attack, or a spell. For this, you will be rewarded with experience and Influence points (you will also receive similar rewards later into the quest). 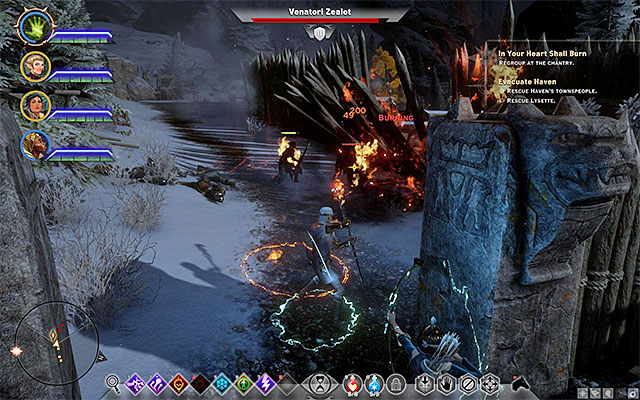 After you approach the gate, you get another quest connected with returning to the Chantry building. DO NOT HURRY to complete this quest, because there still are several defenseless people in the Haven and it would be a good thing to help them also. Start by eliminating one, or two groups of opponents near the main gate. Then, haste to help Lysette, who should be busy fighting around here (M2,2e). Try to kill all of the opponents, before Lysette's health bar depletes completely.

Note - If you want to make sure that none of the party members dies before you enter the Haven, save the game and load it, in case of failure. 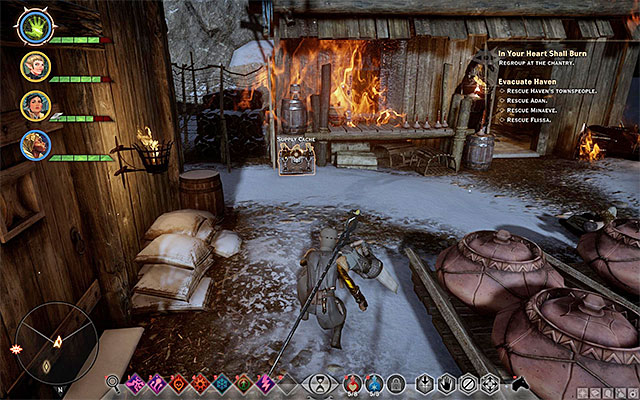 Minaeve and Adan are lying next to each other

I recommend that you first go in the South-Western direction, Around, there are three people that need help and you need to hurry,. First of all, find Minaeve and Adan (M2,2f), because they may die earlier. Only after you save them, go to the burning tavern and help Flissa (M2,2g). Each time, you need to stand next to the wounded ally and hold down the interaction key/button, before flames, or an explosion, kill the NPC. At the same time, it is worth noting that close to Minaeve and Adan, there are supplies. 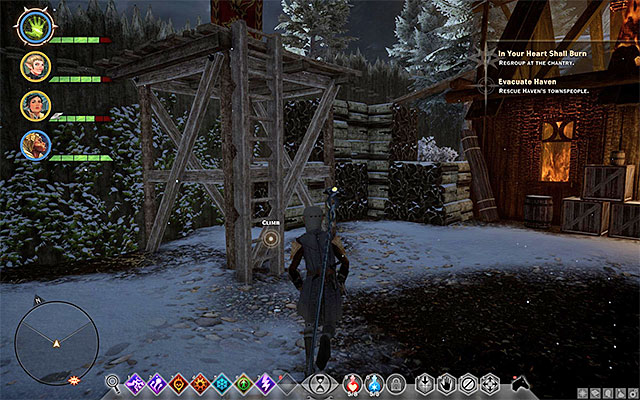 Now, head North-East. Merchant Seggrit has been trapped inside one of the buildings here (M2,2h) and it may be a bit difficult to reach him. Take the ladder shown in the above screenshot and climb onto the wooden structure. Take a jump and walk over the beams to jump into the burning building, through the roof. Save Seggrit and smash the crates at the door with a strong attack. 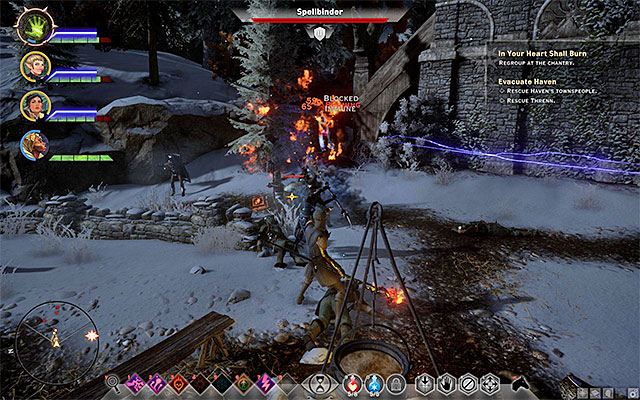 You can find Threnn next to the chantry building

Finally, help Threnn. He is staying near the entrance to the chantry (M2,2i) and you need to eliminate all of the enemies around, before her entire health bar depletes (use strong attacks to win as quickly as possible). Find the Supply crate here and enter the chantry (M2,2) to listen to the further part of the battle plan. The plan is that you reach the third catapult to the West of the chantry. Go North and take a turn to the West. Engage the opponent only if necessary. 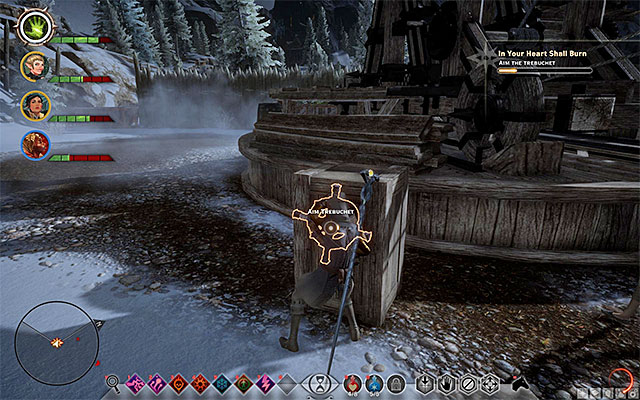 In free time, interact with the mechanism of the trebuchet

In here, you are going to fight the most demanding fight of the entire quest. Attack the enemies, BUT do not focus on the entirely, because they will be incessantly coming here. You need to have your character, or any other party member (it would be best if it was the least useful one), on a regular basis to prepare the catapult to be fired (the interactive mechanism). Interrupt this process only when the operator of the mechanism is attacked, or when the mechanism becomes temporarily inactive. In between the enemy attacks, heal your allies. Also, you can find a Supply crate here, but do not open it until you have used up all of the vials you have. 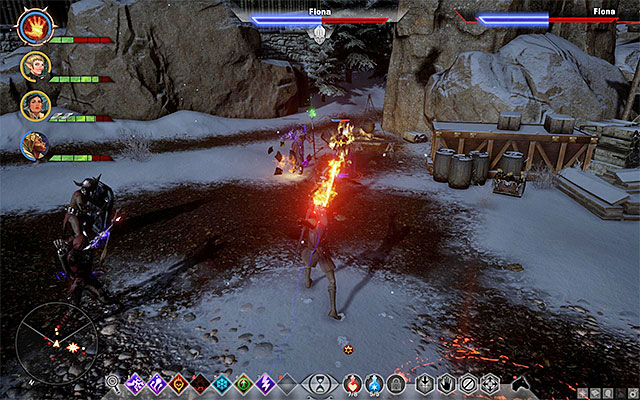 Towards the end of the fight, around the catapult, there also appears a miniboss. If you have earlier completed the "Champions of the Just", it is going to be the Grand Enchanter Fiona. You need to conduct your fights in the same way, as you would in the case of regular mages so, search for opportunities to stop her from casting her powerful spells. What may prove especially effective are attempts to freeze Fiona. 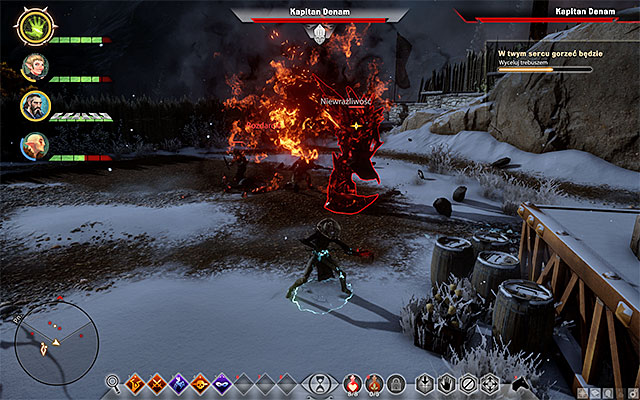 If, on the other hand, you have completed "In Hushed Whispers" earlier, there appears a mutated version of the Knight Templar Denam. He is going to try his strong melee attacks so, the key to succeeding here will be to keep the weakest party members away from the mutant. Also here, you can use freezing attacks to your aid.

Regardless of whom you had to fight, try to eliminate the weaker enemies in the first place and deal with the boss at the end. After a while, the opponents stop coming, fortunately so, you will have some time to get the trebuchet ready. 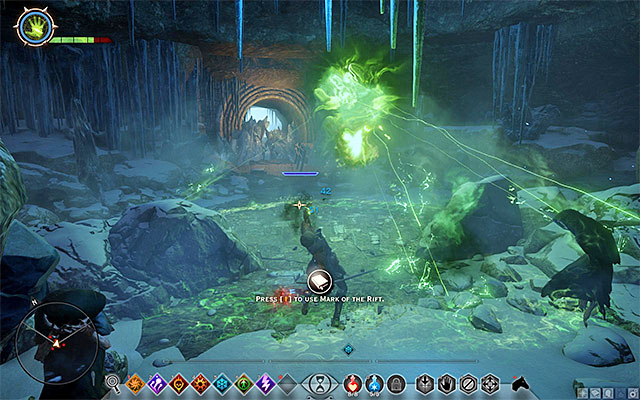 Use the special attack to kill the monsters

You are going to see some more interesting cutscenes, of the meeting with The Elder One and the dragon subordinate to him (you do not need to attach too much care to the dialogue options that you pick). After you have seen more cutscenes, you will get to a new part of the Frostback Mountains. It is a very linear location, which additionally does not need any detailed exploration. Follow the narrow corridor and, after you enter a bigger cavity, attack the monsters. Soon, you will gain access to a new special attack (Mark of the Rift) and it is a good idea to use it immediately, to eliminate the demons without any problems.

Note - using special attacks is limited by the Focus bar, which you charge while fighting. Save it for the most demanding fights. 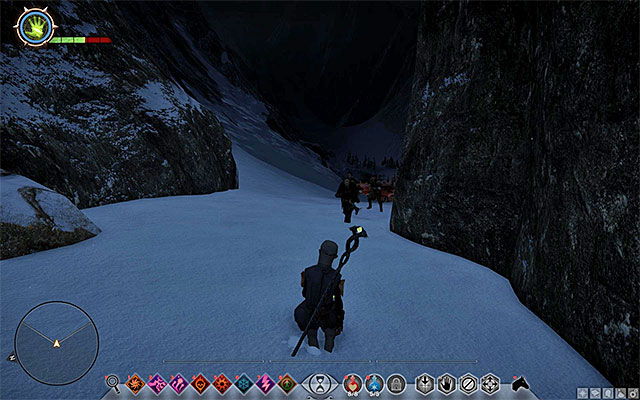 Eventually, you find your allies

You can now exit the cave. Head Eastwards. As I have already mentioned, you do not need to explore the area, because nothing interesting is to be found here. After several minutes, you reach the campsite of the allies that managed to escape Haven. See the cutscenes of the journey to the Inquisition's HQ in Skyhold. 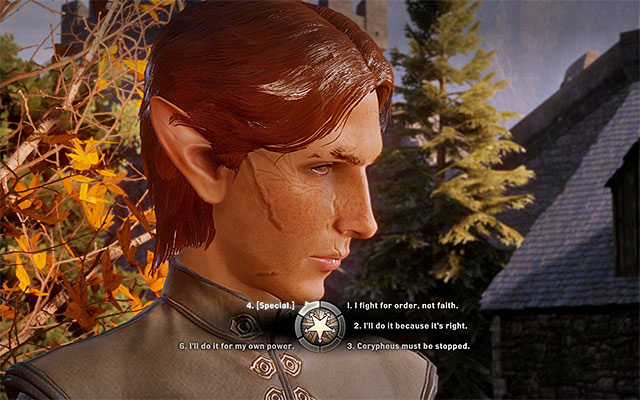 Consider the dialogue options, during the ceremony of appointing the Inquisition's leader

Outside of the Skyhold you are going to meet many people. The most important cutscene concerns the moment of appointing you for the Inquisition's leader. It is a good idea to consider your dialogue options, because it affects your relations with the individual party members (fortunately, to a slight extent). At the same time, it is worth noting that apart from the standard dialogue option, you may also have access to special ones (this depends on the race and the class of your character). Soon, this quest ends and you receive lots of new quests.