Way to unlock: Automatically, after you meet with Fiona during The Threat Remains main quest. 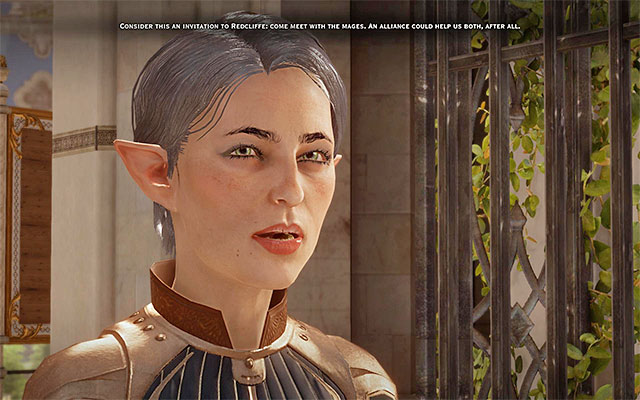 Fiona is much more amiable, towards the party, than Lucius

This quest becomes available after you first come into contact with the rebel mages (apostates) and Fiona, who commands them. You meet Fiona at your attempt to leave Val Royeaux (M4,1). The enchantress wants to convince the Inquisition that you should join your forces and she invites you for another meeting in the village of Redcliffe. Before you go to the meeting, you first need to return to Haven. Go to the chapel and talk to your advisors - Josephine wants to listen to what the mages have to offer, whereas Cullen is in favor of fighting for the Templar support. Fortunately, you do not need to take any binding decisions at this point. 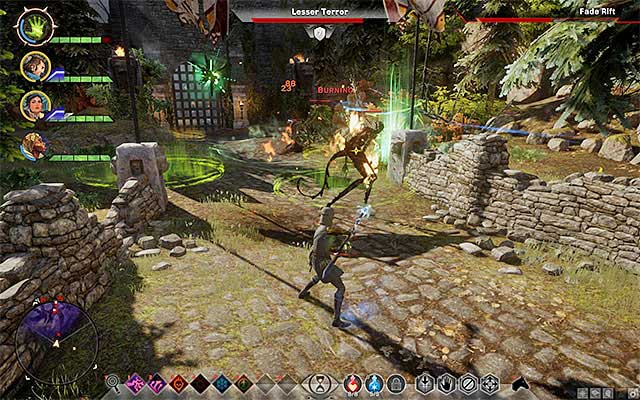 You need to seal the rift at the entrance to Redcliffe

Open the world map and travel to Hinterlands. Your task is to reach near the big gate in the Northern part of the map (M3,2a). You should notice an opened rift here so, attack the monsters gathered around. Ultimately, you need to get rid of all the demons and seal the rift. Wait for the conversation with Magister Alexius to start, who confirms that he wants to meet with the Inquisition, and he invites your party to the local tavern. 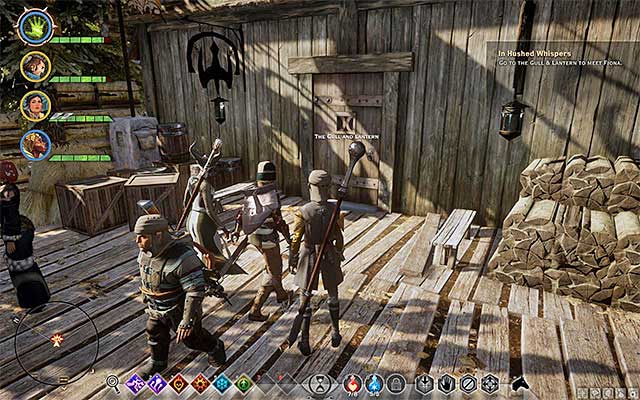 The entrance to the Redcliffe tavern

Note that you can enter the village of Redcliffe for the first time so, head Northwards. After you enter the village, go towards The Gull and Lantern (M3,2b). After you enter the tavern (M7,1a), you will see a cutscene. The meeting will be participated by Fiona and Magister Alexius. You do not need to keep a close eye to your responses, because the dialogue options that you pick do not affect the relations between the Inquisition and the mages, too much. The meeting will be interrupted at the moment, at which the Magister's son, Felix feels bad. 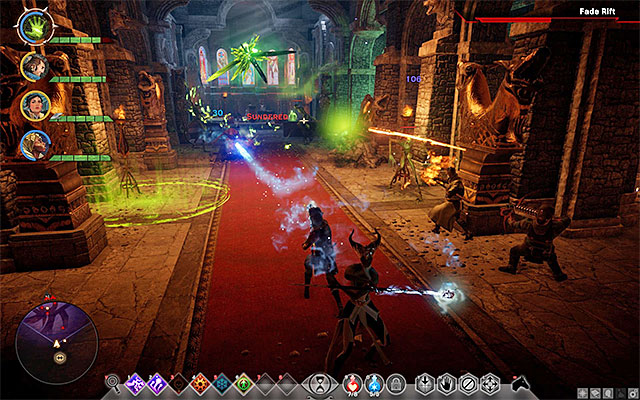 Defeat the monsters at the chapel and talk to your allies

Exit the tavern and, according to the note given to you in secret, go towards the Chantry in the village (M3,2c). Right after you enter the chantry (M7,1b), there will start another big fight with the monsters and, since you are restricted in your moves, do not let your archers and mages be cornered. During the fight, search for the opportunities to disrupt the rift and, after the fights, seal it. You can now talk to Dorian and Felix, who share quite surprising news with you. 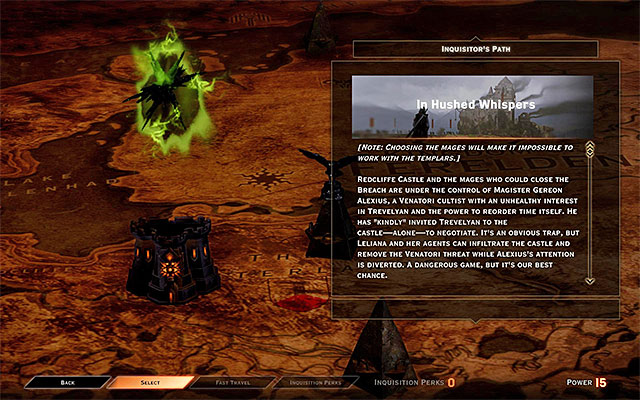 NOTE - taking further steps in this quest means taking up the attempts to obtain the support of the Rebel Mages (apostates). This means that you will not be able to ally yourself with the Templars and, as a result, you will not be able to complete the "Champions of the Just " quest. Before you take to this quest, make sure that it is the Rebel Mages that you, in fact, want to ally yourself with.

To progress to the main part of this quest, you need to gather, at least, 15 Power points. Just like in the case of the previous main quest, I recommend that you complete several side quests, because the majority of them are rewarded with one, to several, Power points. After you have obtained the required amount of points, return to Haven and walk over to the war room. Find the " In Hushed Whispers " operation, shown in the above screenshot, and confirm that you want to spend 15 Power points on it.

Note - the experience level of the party that the game recommends, is around 4-7. I recommend that you progress, with all of the party members, to level 7, because this quest abounds in demanding fights. 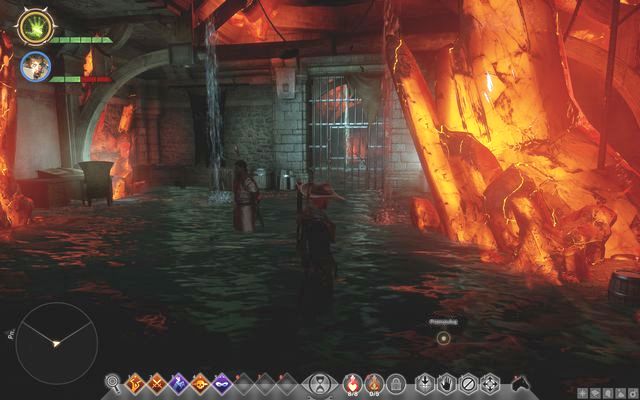 The first chamber, where you start this quest

After the council and after you pick your party members, you cut to the Redcliffe castle, where you have a conversation with magister Alexiusem. Regardless of your choices, you end up being sent into the future - this is where the quest proper starts.

You will be stuck in the future with Dorian (M10,1a). First of all, eliminate the two opponents that launch at you. One of them has a key to the door - collect it and open the door; then go to the stairs. Remember, in the meantime, to assign new abilities to Dorian. At the crossroads, take the door to the right (to the left, there is a chest behind the door) and after a while, you will reach another crossroads guarded by two opponents (Upper Cells). 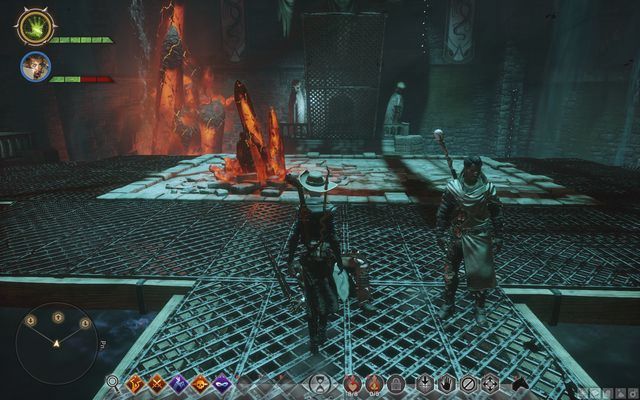 Now, it does not really matter which door you take - you need to comb through all of the cells on both sides. On the right, you find your party members in cells. Free them and they will follow you for the rest of the quest. On the right, at the same level, there is one of the picked party members (M10,1b). You find another one after you climb down (Lower Cells) behind the door on the right, in the last cell (M10,1d). 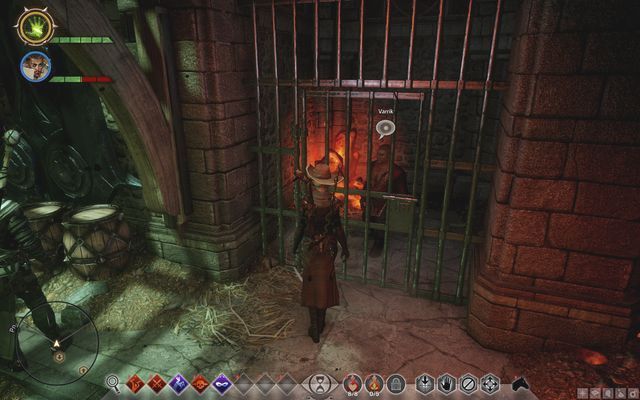 One of the imprisoned party members

Now, return to the Upper Cells and take the door at the other side. There, in one of the cells, you find Fiona (M10,1c), who tells you about the imprisoned Leliana, somewhere in the castle (this conversation is compulsory to continue). After you return to the Upper cells, the drawbridge will come down (M10,1e), where there are 5 enemies waiting - deal with the mage in the first place. 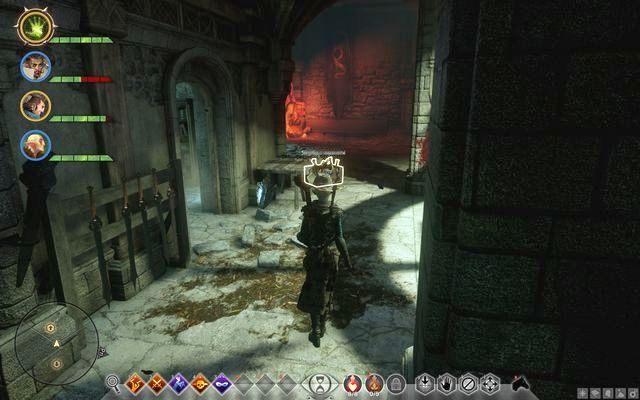 As you climb the stairs, you get to the Guards' Barracks (Northern Dungeon). Pick the useful items (especially, find the supply crate - inside, there are healing potions) and take the stairs up, to the Torture Chambers (Southern Dungeon). 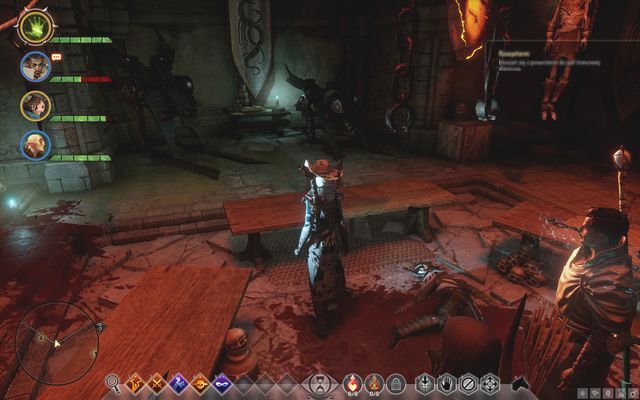 The key on the floor of the torture chamber, where Leliana is being kept

After you hear the voices behind the door on the left, enter through that door (M10,1f)- this will start a cutscene and will Leliana join you. Pick up the key from the floor and go to the door at the end of the corridor. Behind the next door, you get into a small room, where there is a Rift (M10,1g) - deal with the Specters and seal it. 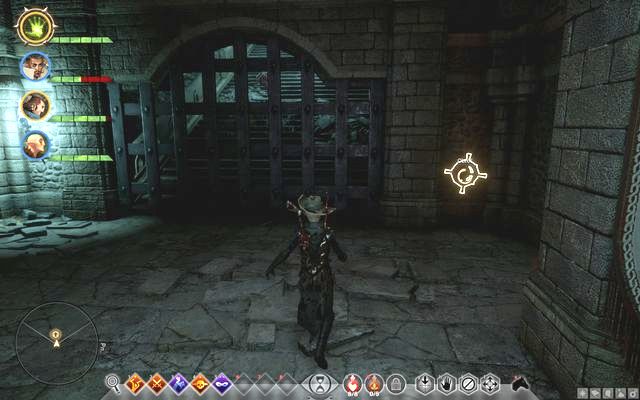 The spinning wheel for the gate

Then, approach the closed gate - on the right, there is a spinning wheel (M10,1h), which you can open the gate with. Now, exit to the Harbor (Outside), where there are several demons, after the fight, you can replenish your supplies again, from the supply crate in the corner. Then, you will exit to the yard, where you need to seal two more Rifts (M10,1i; M10,1j). Then, you will get to the Royal floor, upper wing. Follow the corridor and climb down the stairs to enter the (Royal floor, lower wing) with another Rift, and Venatori Guards (M10,1k). one of them (the mage) has a red lyrium shard on him - you need to collect five such shards to open the door to the main chamber (M10,1p). 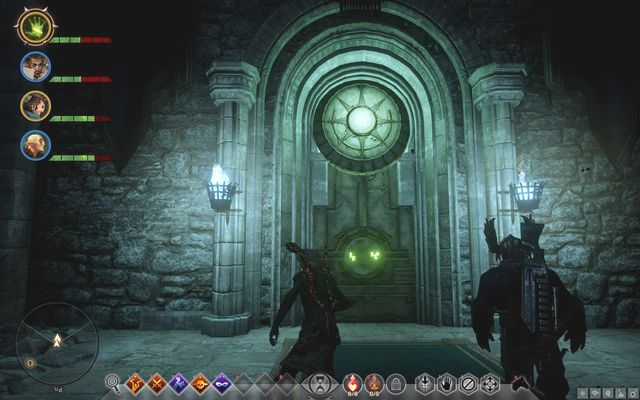 The door to the Alexius's chamber

You now need to visit several places to find the rest of the red lyrium shards. Take the door to the left of the closed gate and climb up the stairs. Again, you will get to the Royal floor, upper wing, but in a different part of the castle. Take the first door on the right - you find a Venatori there and a mage with a shard (M10,1l). You find the second mage, with a shard, at the end of the corridor, behind the door (M10,1m). Exit the room through the next door and you will see three doors in one wall. Behind the door in the middle, there is another mage with a red lyrium shard (M10,1n). You can surprise him by getting him from the side, after you smash the wall behind either of the two remaining doors. After you retrieve this shard, return to the lower level. 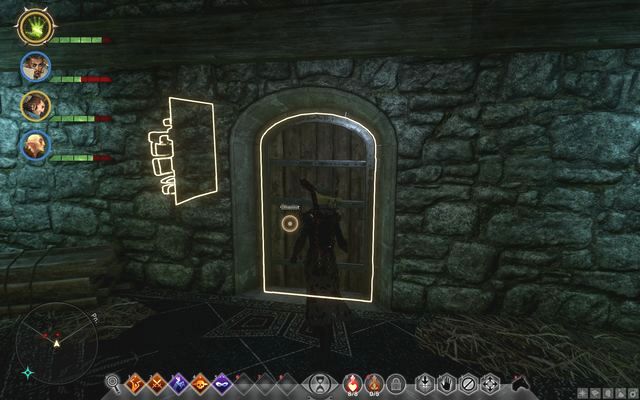 While scanning the area, you will see the wall that can be smashed

Eventually, go to the only room on this floor (M10,1o) (Royal floor, upper wing) and after you defeat the last mage, and collect the last shard, return to the main hall to open the locked gate.(M10,1p). 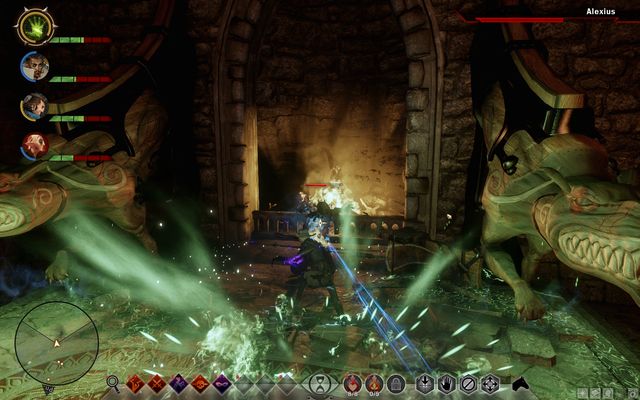 Alexius likes hiding in corners and setting traps around him

Now, you are going to fight the final battle with Alexius. After a short conversation, the battle will ensue. First of all, Alexius uses traps so, be careful while approaching him. He is highly resistant to cold (he cannot be frozen), but he is vulnerable to knock downs. Twice, when his health drops to 2/3 and 1/3 respectively, he summons rifts that you need to seal. In the meantime, he will be invulnerable.

After the battle, you receive an amulet and a mage's staff. Now, a dialogue between the characters will take place - you can decide here what you want to do with the mages - an alliance or imprisonment.