Way to unlock: Automatically, after you complete The Wrath of Heaven main quest 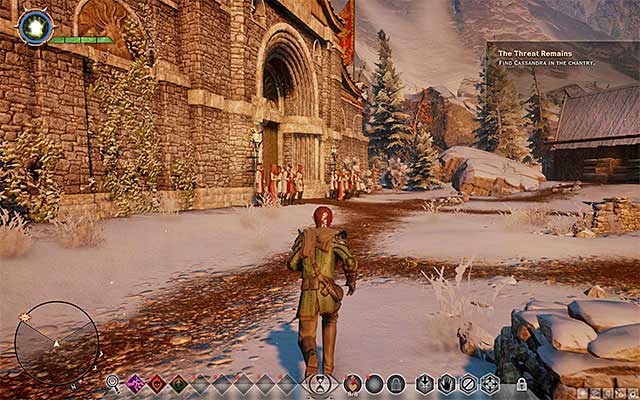 You start this quest in one of the cottages at the Haven (M2,1). After you listen to the conversation, which is not too important, exit the cottage and go towards the chapel (M2,1a). Walk over to the war room and wait for the council to begin, which is participated by Cassandra, Leliana and Chancellor Roderick. After the council, you will see a cutscene, from which you learn about the new activities of the Inquisition, you receive 1 Power point and 40 Influence points (you can learn more about the meaning behind Power and Influence from the game guide - they are used to unlock Inquisition's Perks). 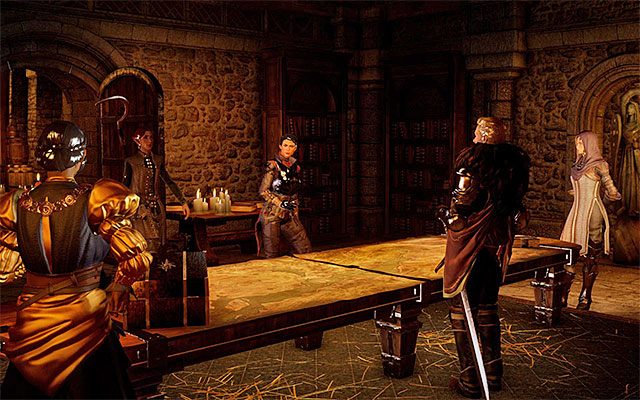 You will be allowed to learn more about your advisors

Again, enter the chapel, thanks to which you will see a cutscene. During the cutscene, you will be officially acquainted with the three advisors - Josephine, Cullen and Leliana. Apart from that, the war table loads up for the first time, where you can dispatch your advisors for operations (and where you unlock Inquisition's Perks). To learn more about the functioning of operations and the war room, see the game guide (the Inquisition Management chapter). 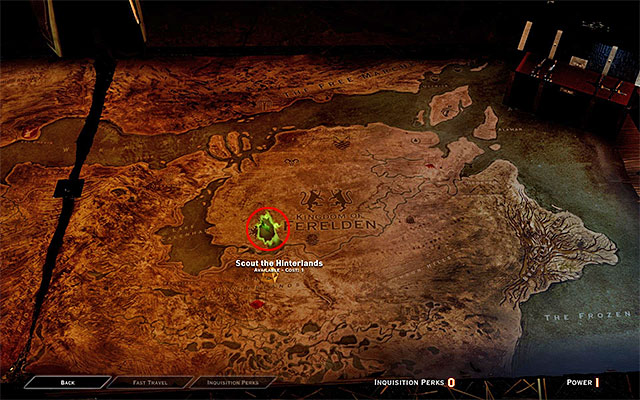 As of now, while at the war room, you only have to perform one action - pick the operation shown in the above screenshot (Scout the Hinterlands) and assign it to be performed (automatically). It needs to be pointed out that only Leliana can complete this operation. Doing the above automatically unlocks a new area of the world - Hinterlands. You can go there immediately, or only after you have sufficiently explored the Haven. If you go for the latter, you need to bring up the world map and select the Hinterlands. 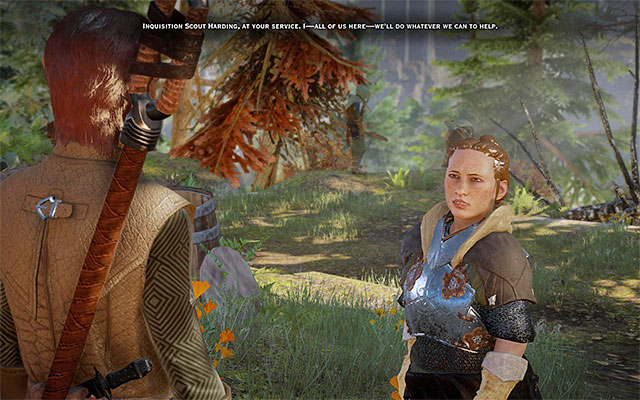 Reaching the Hinterlands automatically starts a short conversation with Scout Harding (M3,1a), who tells you more about the fierce fights between the Templars and the mages. Harding also tells you that Mother Gisele helps the outcasts near the nearby hill and she may require help. Climb down the hill and go towards the crossroads (M3,1b). 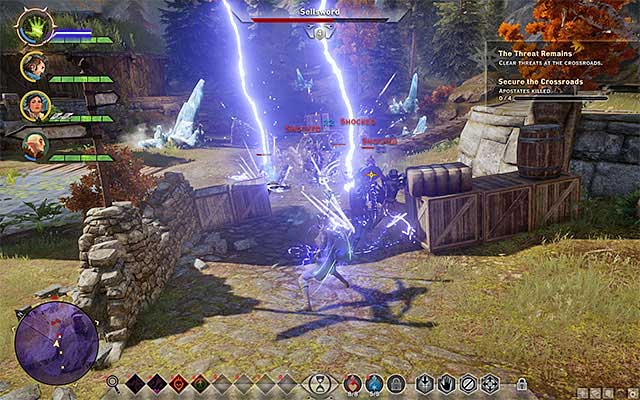 After you reach the Crossroads, you will notice a big battle being waged and you will have to join in the fights. During the fight, you will both have to eliminate the Templars and the Rebel Mages. As for the Templars, pay the most attention to eliminating the ones hiding behind the shields, quickly (attack them either from the side or from behind). When it comes to the mages, eliminate the enemies that wield magic (it should be pointed out that they do not do well in melee). The fight is long and there will be reinforcements arriving, on both sides. 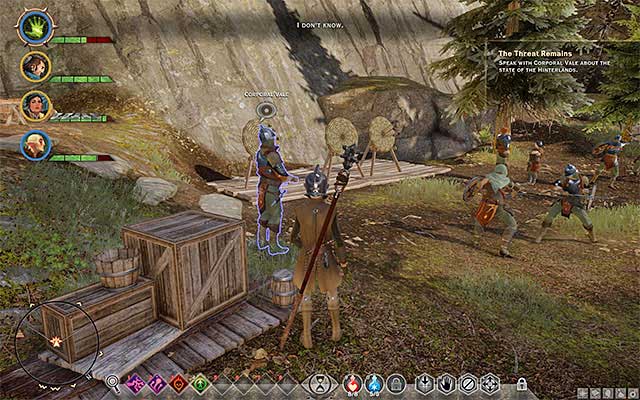 After you win, you will see a short cutscene and you will meet Mother Giselle. During the conversations with Mother Giselle, you do not need to pay too much attention to the dialogue options that you pick. After the meeting, remain at the crossroads and find Corporal Vale (M3,1c), who you also need to talk to. 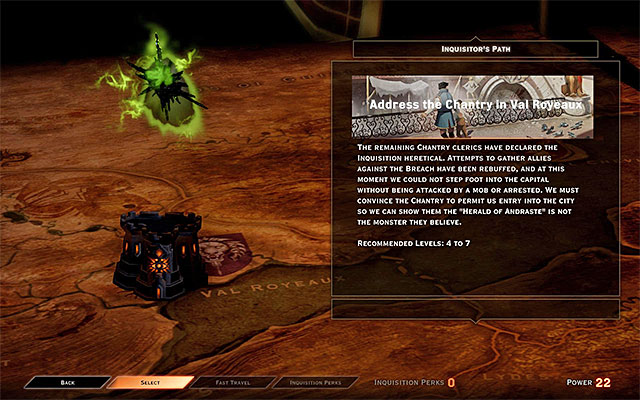 Before you take to completing the rest of this quest, you need to gather, at least, four Power points. The easiest way to do this is by completing side quests, or by sealing the rifts. After you obtain the required amount, return to the Haven and go to the war room at the chapel, to summon a new council. On the war map, find the figurine shown in the above screenshot, which symbolizes an activity connected with Val Royeaux. Confirm that you want to start quest "Address the Chantry in Val Royeaux", and spend the four Power points on it. You can now travel to Val Royeaux.

Note - The game recommends that you do not visit Val Royeaux, of your party members are not on, at least, the fourth experience level. However, you can ignore this suggestion, because there is no fighting in Val Royeaux. Still, if you want to, you can invest into perks that unlock new dialogue options. 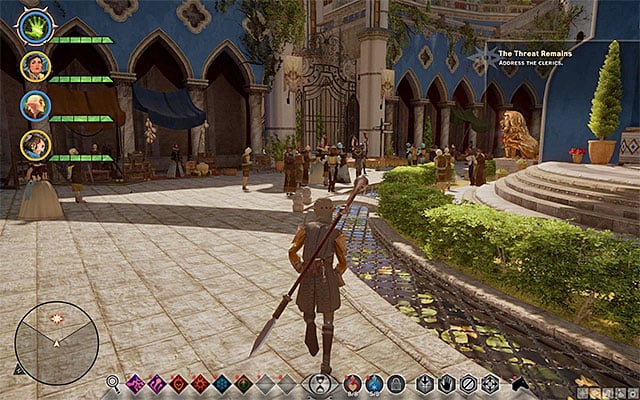 Approach the clerics and see the cutscene

You start the exploration of Val Royeaux in the western part of the location (M4,1). Listen to the conversations with Leliana's spy and head Eastwards, to the place, where the clerics are (M4,2). Here, you will see another cutscene. During the conversation, the Templar commander Lucius arrives. The dialogue options that you pick, during the (short) conversation with Lucius, do not affect your relations with the Templars, nor do they provoke any attack. 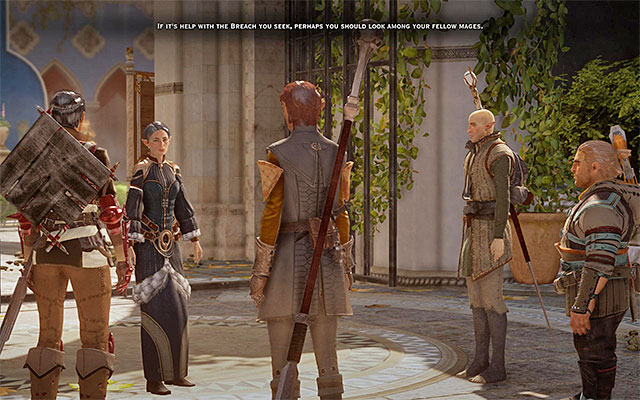 Try to leave Val Royeaux, by returning to the starting point (M4,1). You will be accosted by Fiona that represents the rebel mages and who commands them. Listen to the conversations with the enchantress (just like before, you do not need to pay too much attention to the dialogue options that you pick). 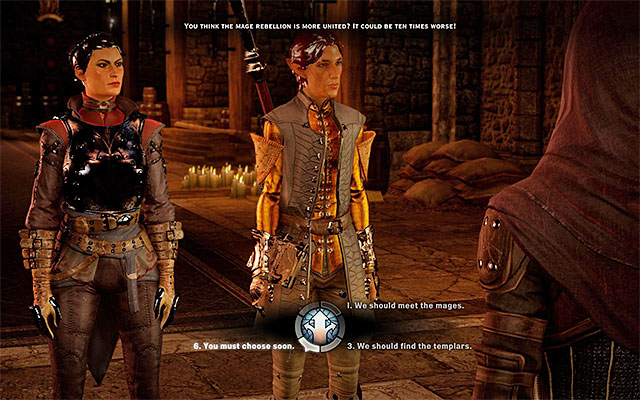 You can listen to the counselors, but you do not need to follow their suggestions

The last thing that you need to do is return to the Inquisition's HQ in the Haven. Enter the chapel, thanks to which you will see a cutscene of the conversation with your counselors. Cullen suggests that you try to win the favor with the Templars, whereas Josephine suggests a meeting with the rebel mages. Fortunately, you do not need to take the decision, of which ally to pick, right now, but you can voice your preliminary opinion.

Note - In your log, there appear, now, two new quests. You can only complete either of them and the other one will be cancelled. If you pick " Champions of the Just " means that you will be seeking favor with the Templars, whereas " In Hushed Whispers " makes you seek favor with the rebel mages.