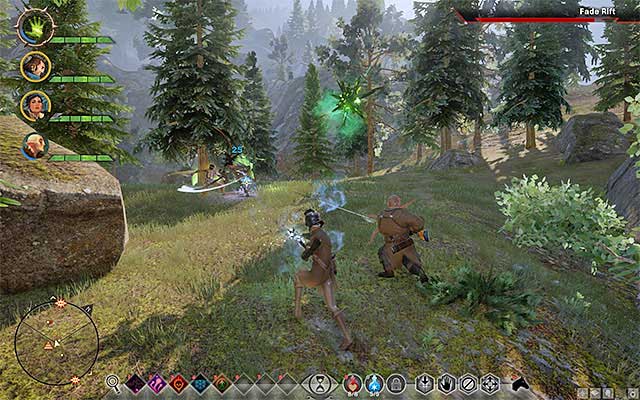 You can switch between the individual party members, ore leave controlling them to the AI

As you probably already know from the previous chapters of this guide, the active party in Dragon Age: Inquisition (i.e. the one that currently accompanies you on your journey) can consist of up to four characters. At any given moment, you can control one of the characters only and, by default, it is the protagonist. Of course, there is nothing in your way to prevent you from switching to the other characters, e.g. to command them to attack with certain abilities, to have them open an inaccessible door (as a rogue). In general, however, the game does not press you to control your entire party for the whole time, because the AI can just as well take care of that. The AI does not have major problems controlling the party members so, if you do not want to control battles in the most detailed way possible, you can easily leave it to the AI. At this point, I remind you that you can set patterns of behavior for the AI, which you can learn more about from chapters Battlefield and Combat.

NOTE - if you want to, you can also make the development process of the party members automatic. The moment they are promoted to a higher experience level, you can allow the system to pick the new ability automatically. Still, I recommend against this, unless you completely want to waive the interest in the development of a given character.