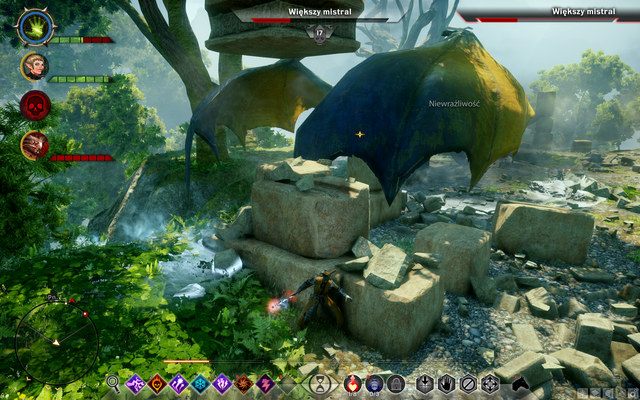 Dragons are the most powerful bosses in the game. There is a total of 10 of them. You can find them in several locations marked on the map of locations, usually in the areas near the edges of the map. The recommended experience level to fight a dragon, so that you have high chances of succeeding, is 2 levels higher than the level of the beast (still, it depends on the skills of the player, equipment that you are using, the composition of the party, etc). The majority of dragons can be challenged to fight right at the beginning of the game by approaching their dens. Some of them, however, are connected with quests. The battles are difficult and they last between 5 and 20 minutes. Usually, you get rewarded for your efforts well - each dragon has, at least, one legendary item.

You need to get prepared before the battle with a dragon. Before the fight itself, it is a good idea to perform a little reconnaissance - see the arena and recognize the type of the dragon. The looks of the arena (the den or out in the open) determines whether the dragon is going to be flying above the arena and you will learn if there are any formations to hide behind. The type of the dragon determines the type of his attacks - if he attacks with fire, equip your weapons with a rune dealing ice damage (and use this type of spells as a mage) and if it is the other way around - attack with fire. 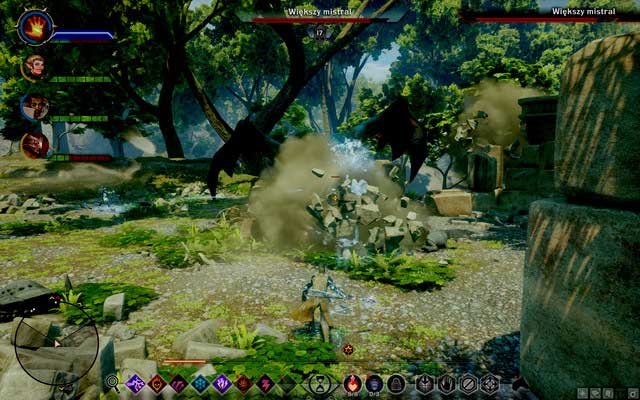 Covers are not everything - the dragon crosses some of them effortlessly

While getting prepared, you need to remember about health potions in the first place. It is best to compose the party in such a way, that it consists mostly of ranged fighters. A good choice here are mages who attack with spells of the element that weakens the dragon, and one supporter - a mage with spells of the Spirit group: Barrier and Revive.

At the beginning of the battle, it is best to deploy the party members in the tactical mode in a curved line, because the majority of his attacks are AoE attacks and it is a good idea to keep the distance between the individual characters short, in case that you need to hurry to their rescue. You can attack any of the dragon's limbs and his maw. It does not really matter but, if you land multiple strong strikes against one of the elements, the dragon may pause his attacks, writhing in pain.

Dragons have the following abilities: