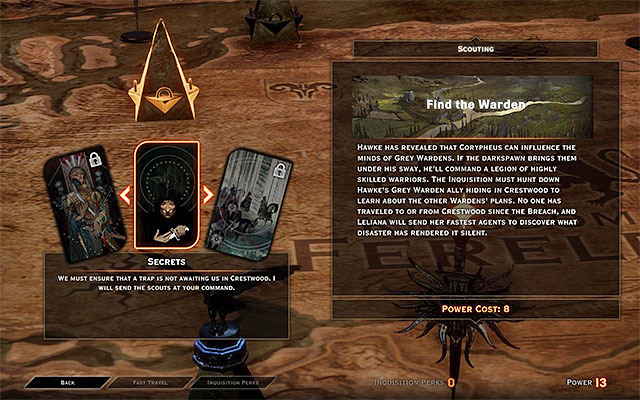 An example missions connected with unlocking an new map area

In the previous installments of Dragon Age, you had freedom to explore the game world, virtually from the very beginning of the game. In Inquisition, the game world is huge, BUT you gain access to the individual parts gradually. At the very beginning, your party can visit only several initial areas. In order to unlock more, you need to complete quests that you activate on the map at the war room. The most important are the missions connected with the storyline, although there also are several optional areas which you do not need to visit at all costs. To learn more about using the war table, see the War Room page in the chapter entitled Inquisition Management.

Note - to complete missions connected with unlocking new areas, you often require lots of Power points. To be able to do this easily, try to amass these points from the very beginning of the game. 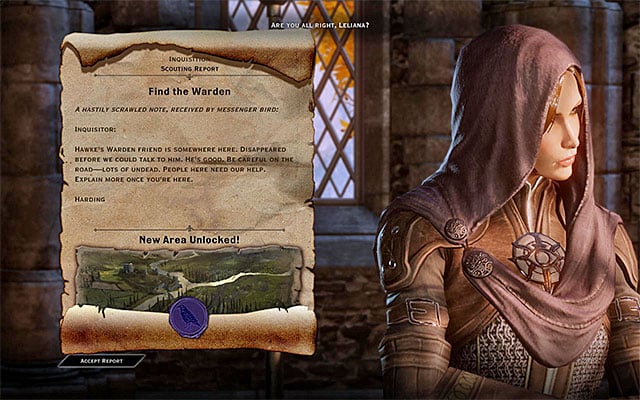 Completing an appropriate mission from the level of the war room leads to unlocking a new area in the game world, which will be brought to your attention. An example of this type of message has been presented in the screenshot above. At the same time, it is worth highlighting that the game always suggests that you journey to the newly-unlocked location immediately. I recommend that you do that; however, make sure that your party is ready for new challenges (experience level of your party members is not too low as in new locations you often encounter stronger monsters).

In some locations, there are areas that are inaccessible (destroyed bridges, collapsed passages), and there may be a quite vast area beyond. Once you locate such a place, it appears on your map in the form of a rectangular flag. Go there and mark it, by setting a flag in the marked spot. From now on, you will be able to - as is the case with unlocking the entire locations - unlock that area from the level of the war map, at the war room. Of course, this is going to cost you a certain amount of Power points.