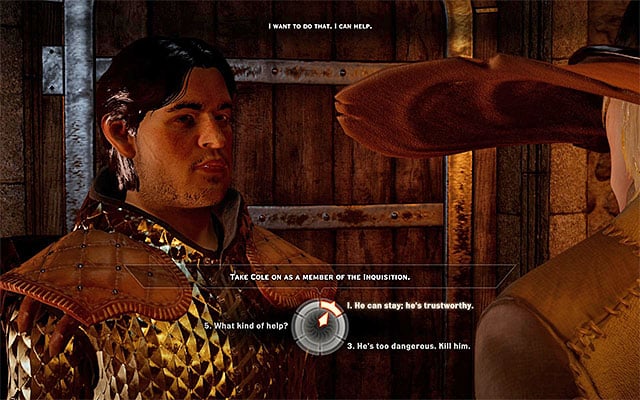 An example important decision to take, during a conversation

An important element of Dragon Age: Inquisition are dialogues that you have with NPCs. Some of the dialogues are elements of the storyline, during which you learn stories and other interesting facts about the world. However, what is the most important, there are decisions and choices that you need to make during conversations. When you are asked about something, you can pick the commentary, that you want to respond with, on your own. The selection menu has been presented as a dial where you pick the statement for your character to utter. The majority of your choices are merely opinions and commentaries but if you reply in the way that conforms with the views of the party members, you can win their support. However, there are some of the choices that will have consequences later in the game and they are reflected by the game world later on. Such decisions are, e.g. a decision to execute someone or the decision to choose the mages/ the Templars as your allies.

The process of making a more important decision is a bit easier: once you highlight a given item in the selection menu, an icon appears in the middle, which represents your disposition towards your interlocutor (e.g. approval, hostility, flirt). The final decisions, concerning the most important issues, change the selection dial and the commentary above each item. These decisions cannot be altered once made.