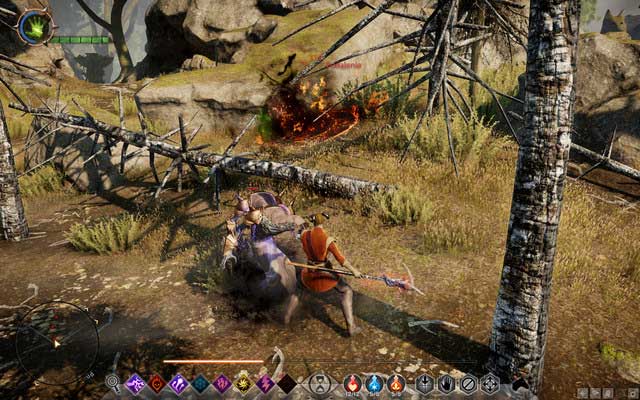 Demons are your staple enemies in the game

Constant fighting is, of course, the obligatory and the most important element of each RPG game. In this one, you either fight on your own or with the party, which can consist of up to three members. Each of the party members is controlled by the AI but, at any moment, you can switch to them by clicking the character portrait, or by using the appropriate button. Also, you switch automatically, to a different character in case of your own fall. Each fallen party member can be revived by another party member which regenerates half of their health bar of the revived, or by a mage who can do that over distance (the Revive spell). You can also use an amulet that falls apart at the moment of death and heals the wearer. To revive a character, you need to approach them and press the action button. The process takes about 5 seconds to complete and it may be interrupted by the attacking monsters. If possible, the AI also attempts to revive the fallen companions so do not risk crossing the entire battlefield to reach the party member if someone else is closer. Once all of the party members fall, the game ends and you need to load the last save. After you win the battle and exit the aggressive stance, all of your fallen characters get back to their strengths. 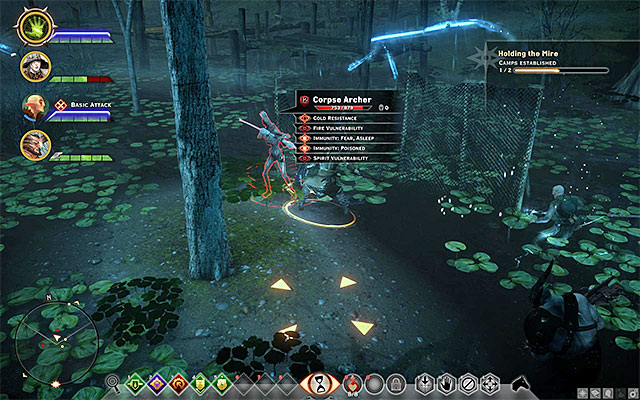 Dragon Age: Inquisition introduces a bit more sophisticated model of tactical combat, but it is not too complex so it will not be a massive problem for the players who have had no previous experience with this mode. As the leader of the party, you can issue orders: to attack a specific target, to hold ground or to leave the combat mode (especially useful if you want to retreat from the battlefield or when enemies cannot see you but they are nearby). Also, you can use game pause option, which allows you to take a look at the entire battlefield and learn about your current situation. To activate it, you need to press an appropriate key or zoom out the camera away from the character as far as possible. While planning on a tactical attack, you can also plan the deployment of the characters. This is especially useful while fighting bosses (dragons, among others), who land many AoE attacks and pose a serious threat to the party members who are clustered together. Also, time stops when you land certain AoE attacks (e.g. the mark of the rift, electrification spell, cage or when you throw a grenade), at which point you see the radius of the blast and the functioning of the attack.

The game offers you the option to specify the behavior modes for the characters. There are four parameters that you can set: