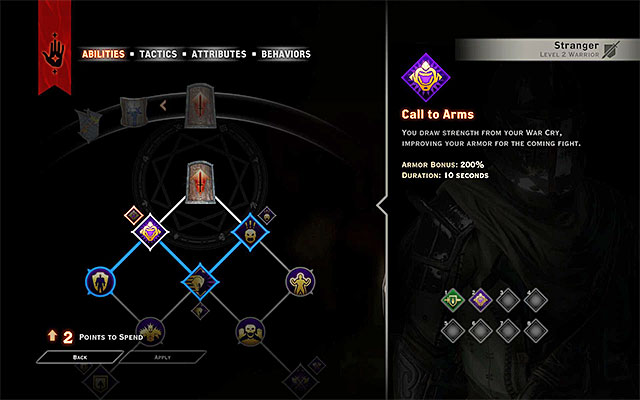 In Dragon Age: Inquisition there are many abilities available for unlock. The array of the available abilities depends, of course, on the character class that you choose at the beginning of the game, and they are presented in the form of skill-trees that represent various categories (e.g. Sword&Shield and Two-Handed weapons, in case of a warrior). The fact that these are presented as trees, means that you need to unlock them one after another. Reaching more advanced abilities may require you to unlock one, or several, of the previous ones.

In the first page of this guide, I mentioned that the abilities are unlocked with the available development points. You receive a point each time that your character progresses to the next level. There are three categories of abilities:

I recommend that you, early in the game, unlock at least 3-4 active abilities, so that it grants you with more room to maneuver, depending on the situation in the battlefield (e.g. if you encounter a strong opponent, or a group of the weaker ones). Also, it is a good idea to obtain several of the "strongest" passive abilities. I recommend that you take interest in the upgrades later and unlock them only for those of the passive abilities that you use the most frequently.

Note! If you do not want to lose time on reviewing abilities in order to find the most useful ones, you can leave that to the game. In such a situation, once you access the character window, you can press the button to level-up automatically (Auto Level Up). I won't recommend using this, because the game may attribute points to the abilities that do not conform with your path of development (e.g. unlock a defensive ability when, what you need, is a strictly offensive character).

Note! A detailed list of all the abilities can be found in the chapter of this guide entitled List of Abilities. This chapter only lists hints on the usefulness of the individual abilities.