It should be remembered that the second part of the Dragon Age series is not a direct continuation of the first one. Despite the story starting in a similar place and time, it introduces a new hero and focuses on a different area of Thedas, showing events that are not connected to neither the Fifth Blight nor its consequences. It is also important to know that everything that happens in the second episode is narrated in a form of a retrospection, as the story is told by Varric, who is interrogated by Cassandra Pentaghast - a member of the Seekers of Truth order. The interrogation takes place after the end of the plot.

This time, the BioWare studio has defined the protagonist for us, restricting our choice options only to gender and class. Only for the purposes of this text, let's assume that the hero is a male. His name is Hawke and he comes from a city called Lothering, located in the south of Ferelden. He lived there with his mother Leandra (a disinherited daughter of the Amell family, from Kirkwall - a city in the Free Marches), father Malcolm (a hiding mage apostate, who died 3 years ago) and two siblings: Bethany (also a mage who has to hide) and Carver (a warrior and an ex-soldier from Ostagar). 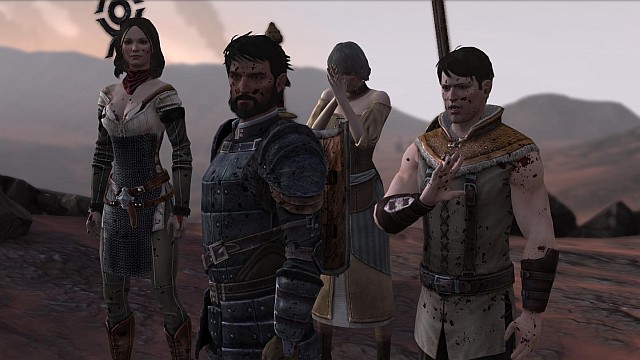 Hawke and his family during the escape from Lothering (prologue)

The action starts in 9:30 Dragon, short after the Battle of Ostagar (the one in which we participated in Dragon Age: Origins). Hawke and his family are running away from Lothering, heading north, with the darkspawn constantly following them. They meet Aveline, a female warrior, and her husband, Templar Wesley, who has been wounded and is slowly turning into a monster. The heroes become surrounded and Hawke's brother (or sister, depending on the class that we pick) dies, as well as sir Wesley. Our protagonists are saved by Flemeth, a which, who comes in the form of a dragon. The heroes promise to take an amulet to the Dalish in the Free Marches and Flemeth takes them to the nearest place from which they can sail to Kirkwall, which is known as the City of Chains (because of the slavery that thrived there before).

After arriving at their destination, our heroes find out that the city is besieged by refugees from Ferelden and its gates are closed. Fortunately, an opportunity to help the city guards shows up and the group makes contact with Gamlen, brother of Hawke's mother, who lives in Kirkwall. The man, despite disliking his sister, agrees to give the heroes shelter in his house in Lowtown. However, in return for this favor, Hawke has to work for either the mercenaries or the smugglers, for the next year.

Getting funds for the expedition. 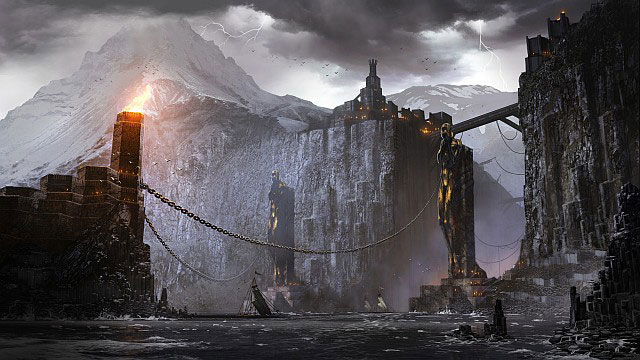 The panorama of Kirkwall

The action jumps to twelve months later [act I]. The news about the hero of Ferelden, who ended the Fifth Plague, is spreading around the world. This fact is the reason for Bartrand Tethras - a dwarf leading the Dwarven Merchant's Guild - to organize an expedition to the Deep Roads, which is supposed to be very profitable. Hawke and his sister/brother see it as an opportunity to become richer, but the organizer doesn't want them to take part in it. Only after talking to Varric - Bartrand's younger brother - a way of joining the expedition shows up. However, this will require our heroes to invest 50 sovereigns.

The gold fever, in which Hawke, his sister/brother, Varric and Aveline take part, becomes a good opportunity to look around Kirkwall and get to know the situation there. The hero participates in the search of runaway mages, organized by Templars, meets a strong group of Qunari with charismatic Arishok in charge (they live in the docks for an unknown reason), almost becomes a victim of a provocation planned by Sister Petrice from the Chantry that is supposed to make people fight against the Qunari, learns about maleficarum's plot against Templars and faces slave hunters. Moreover, the protagonist meets new companions - teasing and seductive Isabela, who is a pirate, and a gloomy elven warrior Fenris, who is a runaway slave from the Tevinter Imperium. 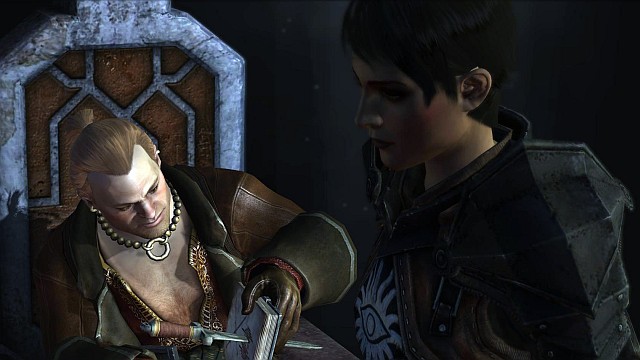 The interrogation of Varric, which is the base of the narration in Dragon Age II

Hawke and his companions visit a Dalish camp at the base of Sundermount. With the help of its Keeper - Marethari - the heroes use the amulet which they've obtained in the prologue to free Flemeth and thus save her life (which she could've lost in Dragon Age: Origins from the hand of the Grey Warden in result of a side quest given by Morrigan). A young elven mage named Merrill joins the group. She decided to live in Kirkwall's outskirts because of her desire to study blood magic, which is frowned upon among the Dalish.

The last thing that our heroes need to do before setting out on the expedition is to find the map of the Deep Roads, which is located in the Grey Warden's home in the Dustown (Kirkwall's slums). It turns out that the Grey Warden living there is Anders (a character from Dragon Age: Origins - Awakening), a mage apostate who leads a sort of a clinic and hides from Templars. Obtaining the map requires helping the Warden to rescue his friend from the Chantry temple. However, the heroes come too late and the prisoner has already been silenced (deprived of his magic skills and of all his emotions). It causes Anders to hate Templars even more, which will have its terrible consequences later.

Expedition to the Deep Roads. 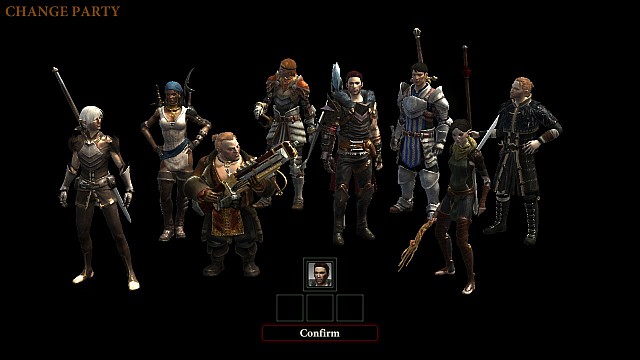 Hawke obtains the map and sets out to meet Bartrand with 50 sovereigns ready. During the expedition, the heroes find an unusual statue made of pure lyrium (a dangerous mineral with magic properties) of red color. The statue makes the leader of the expedition change his behavior to such extent that he blocks the group's way out and thus forces them to look for an alternative passage. On the way, the protagonists discover a pile of gold, which becomes a way for Hawke and his family to get back their nobility. However, the expedition is unfortunate for Hawke's sister/brother, because if they take part in it, they become infected by the darkspawn, which causes death or makes them join the Grey Wardens (if Carver/Bethany stayed in the city, they join respectively the Templar Order or the Circle of Magi).

A few years pass, during which Hawke and his family move to a mansion and gain the Kirkwall citizen's respect [act II]. Moreover, people start to distrust the Qunari that, for some reason, still live in the docks. The hero faces new tasks that require him to get involved in various events in the city and also his private life is full of new episodes (most importantly, the death of his mother, who is killed by an insane mage). As for the politics, Hawke is involved in the case of murdering Viscount Marlowe Dumar (the leader of Kirkwall), who sympathized with the Qunari. The person who killed him is Sister Petrice, who did this to prevent the citizens of Kirkwall to change their faith into Qun. 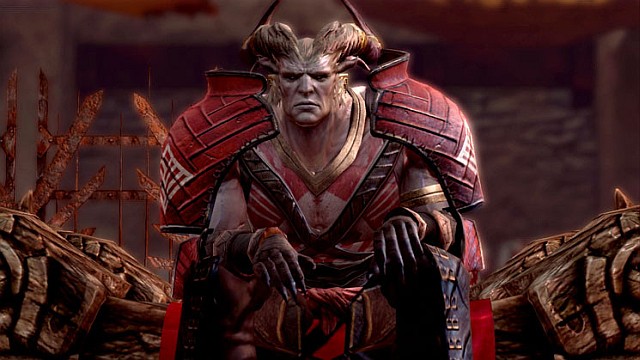 Despite the Grand Cleric Elthina condemning Petrice's behavior (she can even let Qunari kill the murderer, depending on Hawke's actions), this incident becomes a turning point in the Qunari situation. Arishok, having witnessed Kirkwall become morally depraved, decides to mobilize his forces and seizes the Viscount's fortress, thus starting fights on the city streets. Hawke and his companions land in the middle of the conflict. The team makes its way to Marlowe Dumar's residence, with the help of Meredith Stannard (the leader of the local Templar Order) and Orsion (the First Enchanter of the Kirkwall's Circle of Magi). After arriving at the fortress, they witness Arishok beheading the leader of Kirkwall. Arishok declares that he and his subordinates will not leave this place until they regain the Tome of Koslun, a sacred scripture of Qunari lore, which has been stolen from them by Isabela. In most cases, this situation ends with Hawke killing Arishok (either in battle or in a duel).

When the battle is over, the main hero obtains the Champion of Kirkwall title and the action jumps into 3 years later, to the year 9:37 Dragon [act III]. Hawke is needed once again, this time to end the conflict that arises between Meredith and Orsino. Meredith is blocking the election of a new Viscount and seeks evidence that would allow her to liquidate the Circle of Magi. A chain of events makes the whole world notice the situation in Kirkwall, which makes Divine Justinia V (the leader of the Chantry, residing in the capital of Orlais) send her agent (Leliana) to decide whether the city should become a target of a crusade called Exalted March, to avoid the escalation of the conflict onto the whole of Thedas. 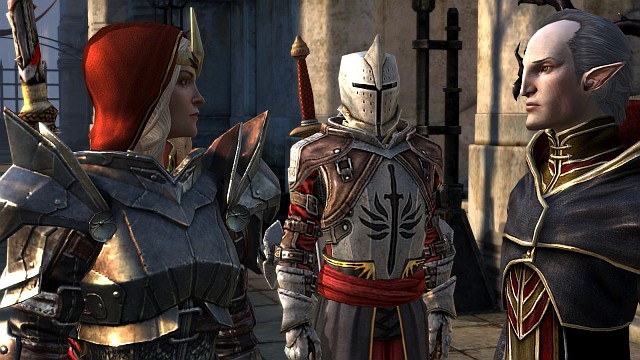 Meredith Stannard and First Enchanter Orsino - the conflict between them has started a global crisis, which we have to deal with in Dragon Age: Inquisition

However, Leliana's judgement turns out to have no meaning, as one night all fears come true. Anders, whose hatred towards Templars and the want for the mages to be free from the Circle, blows up the temple of the Chantry, killing Grand Cleric Elthina. Meredith, without hesitation, announces the Right of Annulment (liquidation of the Circle by killing all of its members) and the streets of Kirkwall once again become covered in blood.

In the epilogue, we find out the circumstances in which the narration took place. After the events in Kirkwall, the Circle of Magi in the whole of Thedas opposed the Templars, who have ended their relations with the Chantry to fight against the mages on their own. Thus, chaos stepped into the world. The Seeker came to the City of Chains short after the incident, to find the Champion of Kirkwall and get his help in dealing with the crisis. Because Hawke is not in Kirkwall, Cassandra's mission is unsuccessful and after her stepping out into the city streets, we see Leliana, who also reports about her failure to find the Hero of Ferelden.

As we now know, bringing peace into Thedas will depend on a different character - the one that we will control in Dragon Age: Inquisition.