When creating Dragon Age: Origins, the developers have built a big and rich fantasy world, which has grown even bigger over the years, thanks to new games, books, comics, etc. To prepare you for returning to Thedas after three years that have passed from the Dragon Age II premiere, in this article, we present a shortened version of the history of this world, by putting together the events that have led to the situation in which the Inquisitor finds himself. After the general history, we summarize the events from both previous games (in separate texts). Those of you who have not played them and intend to do it later, should not read too much because of huge spoilers that are in there.

The known history of Thedas starts about eight thousand years ago, when the elves built a legendary city called Arlathan. However, the events that are important for players to know, begin a few thousand years later, when humans who came from the north formed the Tevinter Imperium. This happened in year -1195 Ancient, about two thousand years after this race have shown up in Thedas. The people of the country worshiped the Old Gods, powerful creatures living in a mythical Golden City, which was supposed to lie in a parallel dimension known as the Fade. They are the ones that are believed to have given humans the ability to use magic, along with its most powerful and dangerous variety: blood magic. Exceptionally talented adepts of this school were called magisters and the most powerful among them became the ruler of the Tevinter Imperium and was called the Archon. Using their magic skills, the people of Tevinter started to expand their territory, turning the elven heritage into ashes and reaching Ferelden, the southern edge of Thedas. 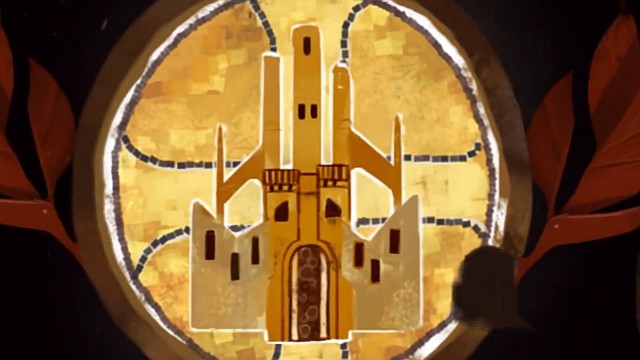 The rising pride and the magisters' craving for power led to a catastrophe that happened in year -395 Ancient, which effects are felt in the world even now, about one-and-a-half thousand years later. The mages from the Imperium conducted a ritual that was supposed to open a passage through the Veil, into the Golden City, and to give the people of Tevinter as much power as the Old Gods have. Stepping into the Fade, the mages saw that the city turned black and Old God Dumat (who taught them how to use magic before) have turned into an Archdemon, materializing in the form of a giant dragon. The magisters didn't manage to come back, as they were turned into mindless, bloodthirsty monsters, becoming the first darkspawn.

Soon, there were hordes of these creatures and a war known as the First Blight entered the world. It lasted for about two hundred years and during the battles, the underground kingdom of dwarves was broken into separate settlements (thaigs) and the Tevinter Imperium was close to falling apart. In the year -305 Ancient, in the Weisshaupt fortress in Anderfels, the veterans of battles with the darskpawn established the Grey Wardens order, an elite organization, which led the human race to fight the darskpawn over the next century and eventually won in the Battle of the Silent Plains in -203 Ancient. Dumat was annihilated and the darskpawn were crushed. People living on the surface were not trouble by the monsters for a next few centuries, but underneath it, in the Deep Roads, the battle with the darskpawn went on.

The Second Blight and the foundation of the Chantry 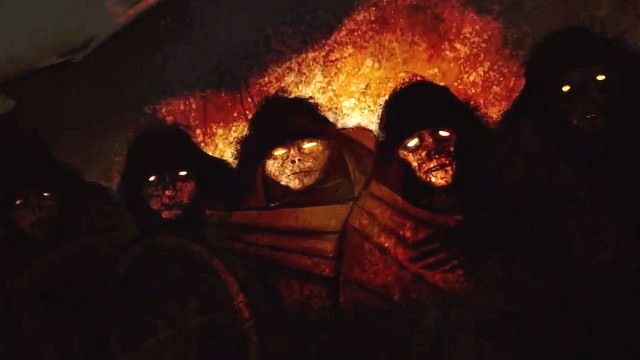 The First Blight ended in the same time that Andraste, a woman from the north of Ferelden, was born. Andraste was the first one to worship the Maker. She led her tribe, Alamarri, to fight the Tevinter Imperium and she could've even succeeded, if not for her husband's, Maferath, betrayal. Jealous of Andraste's fame and craving power, Maferath gave his wife away to Tevinter soldiers and they allowed him to retain the conquered lands (He ruled over Ferelden and gave Orlais, Nevarra and the Free Marches to his sons). Andraste's martyrdom and the amazing events that took place when she ruled over the people of Ferelden became a reason for her worshippers to collect her teachings in a holy text called the Chant of Light. A new religion was founded, known as the cult of the Maker. Over the years, the religion spread onto the whole of Thedas. About one hundred years before the end of the Ancient era, the first Inquisition was founded. Its task was to eliminate demons, mages and heretics. In the meantime, the fall of the Imperium went on and its territory became more or less the land that we know today.

The Third Blight and schism in the Chantry

The passiveness of the elves during the Second Blight brought a drastic increase in hostility between people of Orlais and the inhabitants of the Dales (they settled there, after Andraste freed them from captivity in Tevinter), at the beginning of the second century, known as the Glory Age. After a few smaller skirmishes, a regular war started. The Chantry, fearing that they might loose the fight, organized the Exalted Marches. They destroyed the Dales and the elves spread around the world to live among humans in their cities (in sort of a ghettos called the alienages), or in the wild (this group is known as the Dalish). Taking advantage of the fact that the world was still weak after the Second Blight, the Chantry built its facilities - temples, Circles and Templar posts - all over Thedas, to convert new countries to their religion.

The beginning of the next century (the Towers Age) brought the Third Blight, led by Archdemon Toth. The number of the darkspawn was much bigger, but the fights lasted relatively short - from 3:10 to 3:25 Tower, when the Battle of Hunter Fell took place. The conflict spread onto Orlais and the Free Marches, but people were once again led to victory by the Grey Wardens. At the end of this century (3:87 Tower) the schism in the Chantry took place - due to differences in beliefs between Tevinter and Orlais, concerning mainly the situation of mages, the first country parted from Val Royeaux and elected their own Divine (known as the Black Divine). During almost the whole fourth age (Black Age) and the beginning of the fifth (Exalted Age), crusades (Exalted Marches) were held to bring back unity in the Chantry. Not one of them succeeded in completing the task, but they only sealed the schism.

The Fourth Blight and the Qunari War 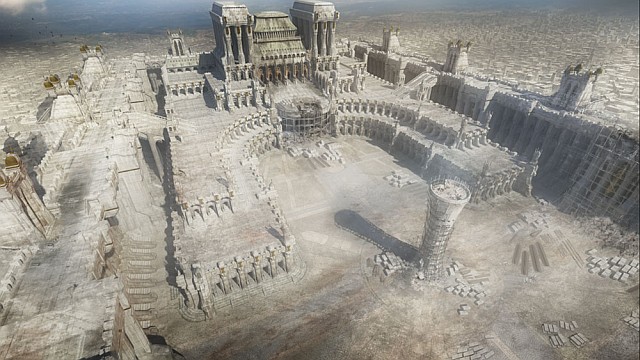 The Grand Cathedral - the seat of the Divine (source: Dragon Age Wiki).

In the year 5:12 Exalted, the Fourth Blight started on the surface, once again beginning in the northern part of Thedas. Despite the relatively small number of the darkspawn, the victory came only after a dozen-or-so years - after the Battle of Ayesleigh in 5:24 Exalted. Like before, the main role was played by the Grey Wardens, who managed to slay Archdemon Andoral. Twenty two years later (5:42 Exalted), the Ferelden country was officially formed. This event took place after Kalenhad's victory over his rivals and crowning him in Denerim, which became the capital of the country. The next century (Steel Age) brought a slaughter of dragons and the arrival of the Qunari. This race, with its characteristic massive built and following of a code knows as the Qun, came from the north and conquered Par Vollen island. After that, the Qunari started war with practically the whole of Thedas.

The conflict lasted for over one hundred years. During the war, both Chantries (from Orlais and from Tevinter) organized Exalted Marches and the Qunari were conquering and loosing a large pieces of land. After about one hundred and fifty years of fighting, at the end of the seventh century (Storm Age), peace was made. The invaders retained Par Vollen and one of the fortresses in the north of Thedas. Only the Tevinter Imperium did not agree to the truce and is in the state of war with Qunari even now (despite the battles taking place very rarely). In the meantime, at the beginning of the Storm Age, the Grey Wardens were banished from Ferelden, after they started involving into the fight for the throne in Denerim.

Loosing and regaining independence in Ferelden 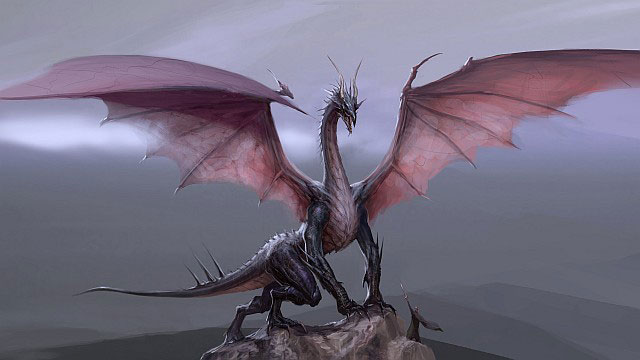 The first half of the eight century (Blessed Age) brought the end of Ferelden's sovereignty, as it was conquered by Orlais after two decades of fighting (the battles started in 8:24 Blessed). The Resistance tried to face the occupier, but a real rebellion took place only after over fifty years, in 8:98 Blessed. The leader was Maric Theirin, who had noble blood in his veins, as he was the descendant of Kalenhad. After four years of battles, the rebellion was successful and at the beginning of the Dragon Age (9:3 Dragon), Maric became the king of Ferelden. The ninth century got his name from the dragons that started to show up on the sky.

Seven years later (9:10 Dragon) the Grey Wardens were allowed to return to the country and after a next decade (9:20 Dragon) Ferelden and Orlais, represented by King Maric and Empress Celene I, made peace and retained status quo from before the invasion. During the next five years, Maric was gone missing at sea and the throne was given to his son, young and naive Cailan. His closest advisor and the person who in fact ruled the country was Loghain Mac Tir, one of the most eminent leader during the war with Orlais and a friend of Maric. What's more, one month after the succession, Cailan married Loghain's daughter - Anora. Ten years later (9:30 Dragon), the Fifth Blight appeared on the surface, this time led by Archdemon Urthemiel (the Old God of Beauty) and coming from the Korcari Wilds. This is the time when the action of Dragon Age: Origins begins.