As it was mentioned earlier, Dragon Age: Inquisition doesn't provide a fully open world, but a set of wide locations, between which the player will move using a menu in the shape of a map. In this article, we will look at some well known places that the developers prepared for us. 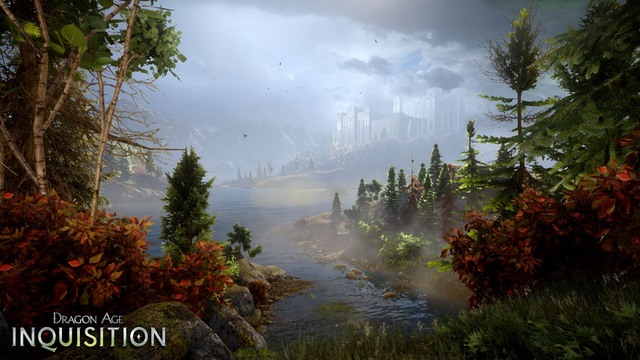 The Hinterlands - an area in the south of Ferelden, known also from Dragon Age: Origins. A green land with a temperate climate, offering meadows, woods and lakes, as well as plains and villages. This beautiful landscape is being ruined by the war between the Templars and mages. What's even worse, both sides of the conflict see the local people as allies of their enemies and commit a lot of crimes, hurting innocent civilians. Thus, the Hinterlands is currently a very dangerous area. The heart of the land is Redcliffe Castle, towering majestically over green plains. The fortress guarantees safety for the city lying at its feet, which prospers quite well due to shipping of goods from Orlais and dwarven cities in the Frostback Mountains. The castle is also the first line of defense for the whole of Ferelden. 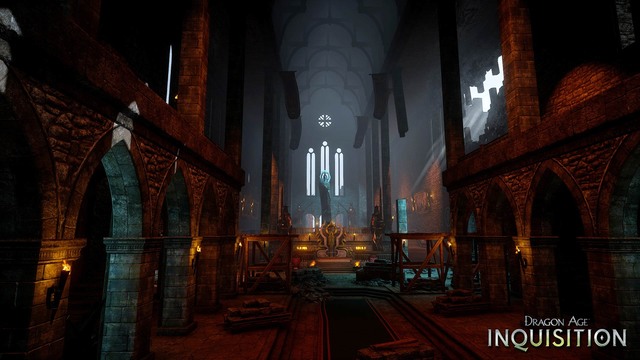 Theringal Redoubt - a fortress in Ferelden. Over the years, it served as the headquarters and a place of training for the Seekers of Truth order - an elite organization answering to the Chantry. The Seekers' task is to save the Chantry from dangers from outside, as well as from inside the order, using silent espionage techniques (one of the members of this group is Cassandra Pentaghast). The function of the Redoubt changed about forty years ago (in 8:99 Divine), when the Seekers lost their source of finances that allowed them to keep the fortress in a good state. 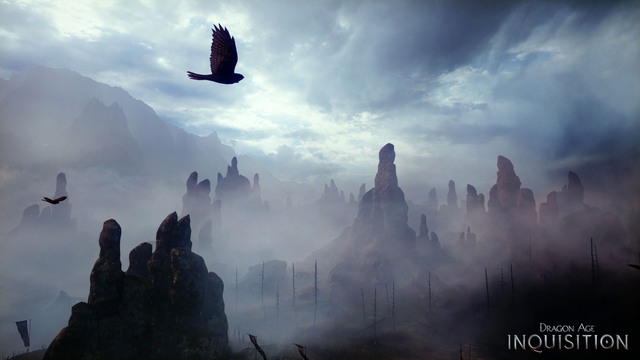 Exalted Plains - one of the areas that altogether are known as the Dales. Before centuries, this place witnessed the fall of the elven civilization, bending under the power of human forces fighting for the Chantry. Nowadays, it is an arena for another conflict, which is the Orlesian Civil War. However, nobody fights here for the moment, as the actions of both sides of the conflict were paralyzed by another danger - rising undead. Due to the informal ceasefire, the Inquisitor will be able to search for the cause of this mysterious phenomenon and look around the environment and wander through wide hill ranges and swamps, facing their dangerous inhabitants, with dragons involved. 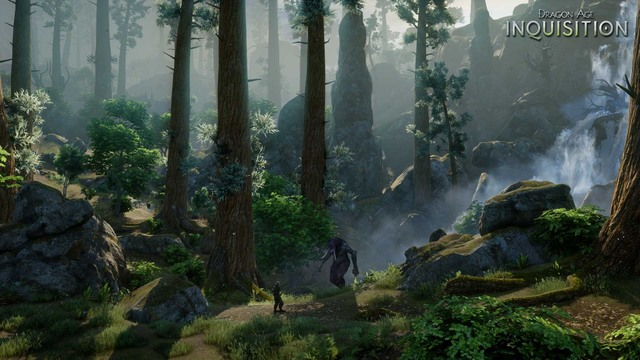 Emerald Graves - an area representing a typical landscape of the Dales. It's an ancient wilderness with streams and rocks covered with majestic waterfalls. This locations can be divided into two parts. The southern part is in the hands of the Orlesian nobility, which built roads and residences there. However, it is abandoned at the moment, due to the civil war (with the biggest battles taking place in the Dales). The northern part belongs to the nature and the original inhabitants of this land. Here, we can find elven ruins, which are the remains of an ancient necropolis. We will see refugee camps, wild animal lairs and passages leading to a network of caves, inhabited by creatures far more dangerous than wolves. 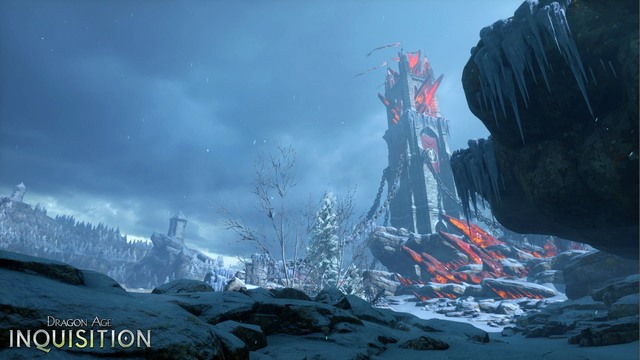 Emprise du Lion - an area located in the east of the Dales, on the mountainsides of the Frostback Mountains. It is an unpleasant land with freezing climate and dangerous paths. Like the Emerald graves, this area bares signs of elven presence, but here, they are much more distinct and do not have the graveyard character. The original citizens are of course long gone and their houses, majestic amphitheaters and a fortress towering above the land are currently in the hands of Red Templars, addicted to red lyrium, which turned them into people capable only of destroying and murdering. The Inquisitor will end up here trying to strengthen his organization and also fighting against the malefactors. Also, the hot springs located in Emprise du Lion, will give the Inquisitor the opportunity to meet a dragon or two. 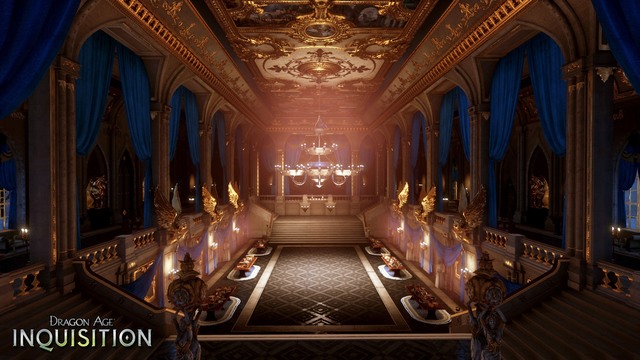 Halamshiral - A city in the north-eastern part of Orlais, near the feet of the Frostback Mountains and at the coast of the Waking Sea (northern edge of the Dales). It was built by the elves in ancient times, marking the moment in which their exodus ends, but a few centuries later, after an Exalted March, it became an Orlesian city. Despite the fact that humans rule in Halamshiral, the elves outnumber them still, as the original citizens of the place. The most important building in the city is the Winter Palace - a residence full of splendor, belonging to Empress Celene I. The palace is the place where peace talks will be conducted between the sides of the civil war. The Inquisitor and his subordinates will attend a ball organized for this occasion, to make sure that everything goes well and to prevent anybody from attempting assassination. 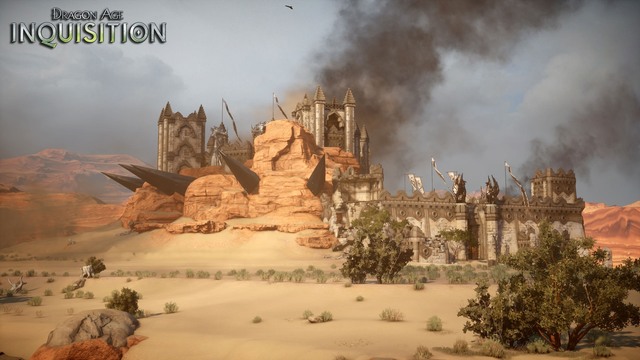 Western Approach - A desert area in the north-western part of Orlais. Nowadays, it is a wasteland, where you can here only the wind blowing above the dunes, rock formations, gloomy ruins and iron towers marking the only one, relatively safe place here. Life used to thrive here, but the Second Blight - the invasion of the darkspawn through the Abyssal Rift - forced the citizens to move. They didn't come back even after the humans' eventual victory and building a strong facility of the Grey Wardens there. The outflow of people made the Grey Wardens leave the Western Approach, abandoning the monumental Adamant Fortress, which guards the edge of the Abyssal Rift to this day. The fortress will be restored by the Inquisition, but the hero will have to clear the area from the darkspawn, before he can live in the castle.