What is the most important thing in the Doom Eternal? The demons! Hellish and evil monsters that can be destroyed with your magnificent weapons. On this page of our guide to Doom Eternal you will find a detailed description of all enemies that can be encountered in the game. Also, you will learn more about their weaknesses and vulnerable spots. 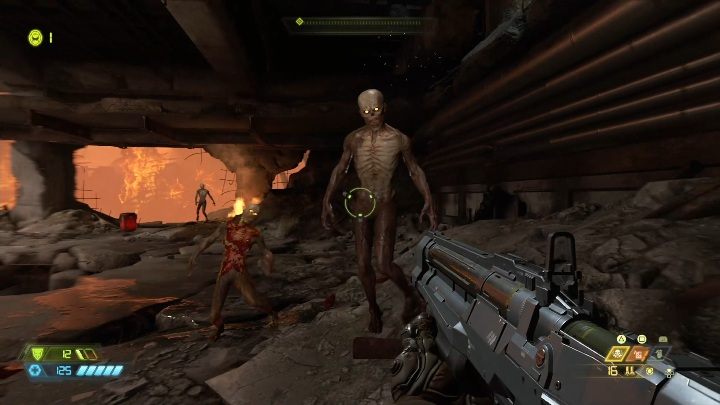 These are the weakest opponents in the game. You don't have to worry about them. They are a perfect way of replenishing health, ammo and armor. 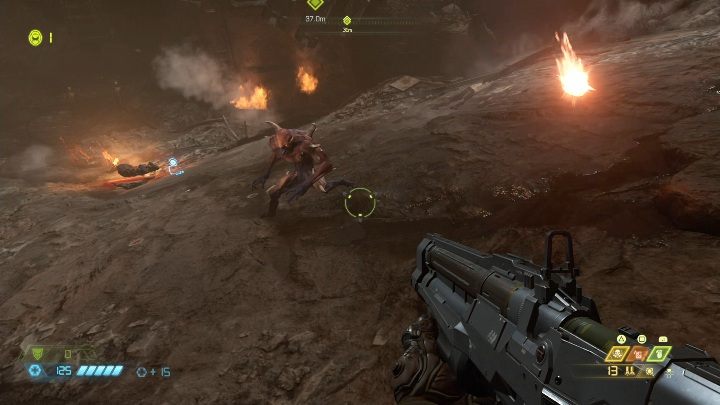 Don't underestimate them. They are small and terribly agile, and their fireballs can hit you at a very bad moment.

They can become very dangerous when they become a supportive units of stronger monsters. 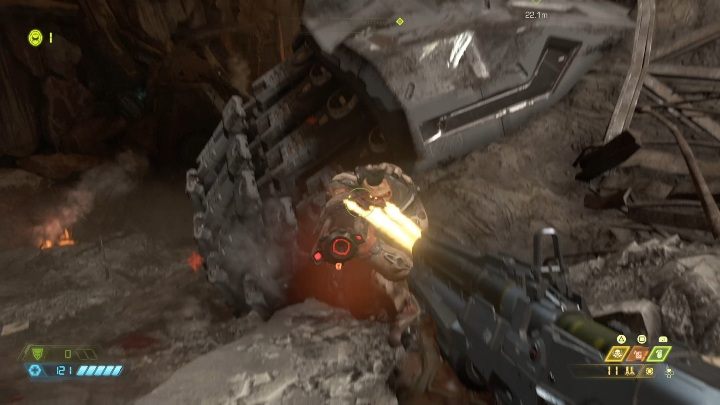 Their overwhelming quantity may cause a serious problem, because you have to fight against dozen of soldiers. They usually appear in groups, but you can destroy them with grenades.

Remember that their worst attack is the shoulder cannon, which can inflict a lot of damage. You can defend yourself against this by stunning your opponent with a shotgun. 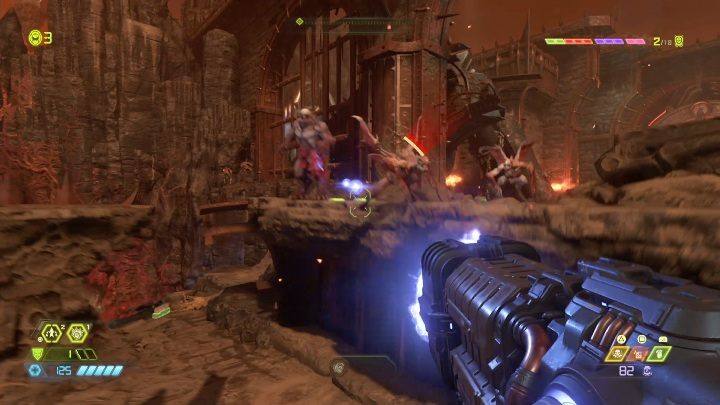 This is an invisible enemy that attacks from the air. Use grenades to eliminate this type of enemy. 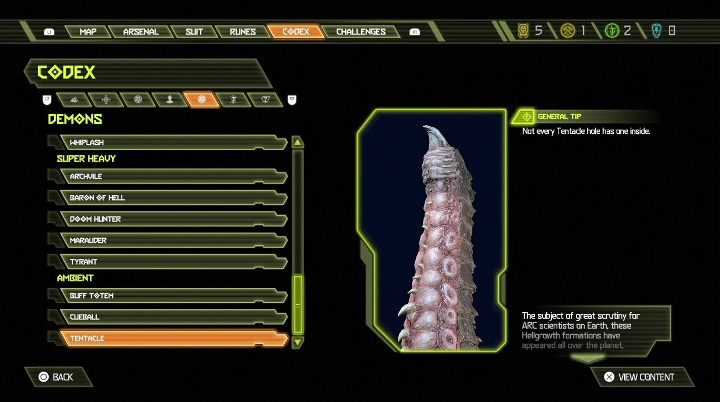 Like in any other game, tentacles are hidden in the ground and jump out when you approach them. Luckily, they don't have a lot of health points, you can defeat them with a few accurate punches. 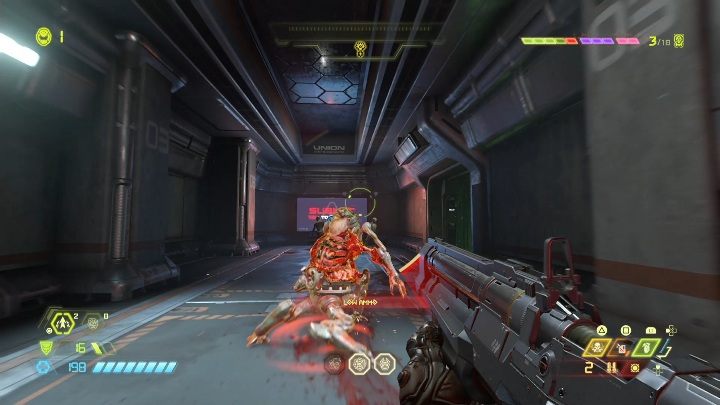 Carcass uses an energy shield so use the Plasma Rifle to attack it. As soon as you melt the shield, it will become defenseless - destroy it at once.

Both ways mentioned above will quickly destroy the enemy's shield. 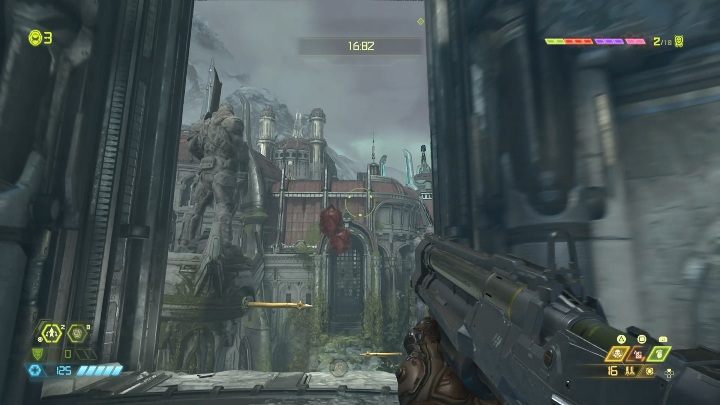 The gloomy Cacodemon, known from earlier parts of the series, can only be defeated by bombs or grenades. Throw a grenade into its mouth and it will die in just a few seconds.

Ballista is a great weapon against flying demons, cause it's easy to target your opponents and deal extra damage to them. 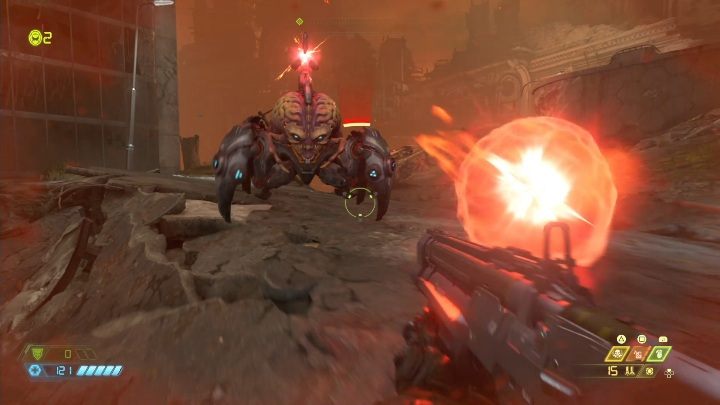 You need to have eyes in the back of your head. This is an extremely powerful opponent. These monsters can attack even from the air. Turrets on their heads deal powerful damage - destroy them with a precise shot. 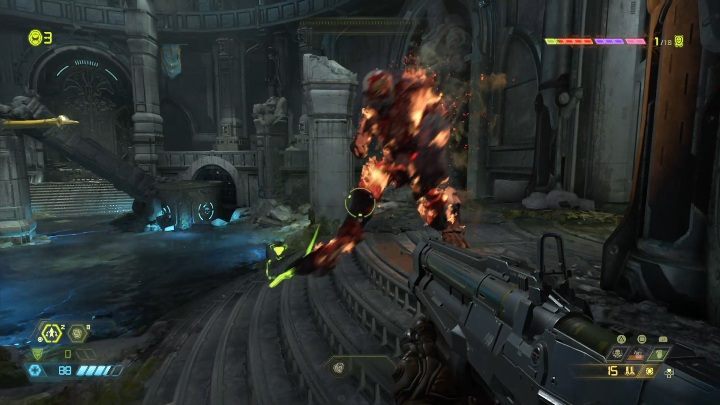 You need to have eyes in the back of your head. This is an extremely powerful opponent. These monsters can attack even from the air. 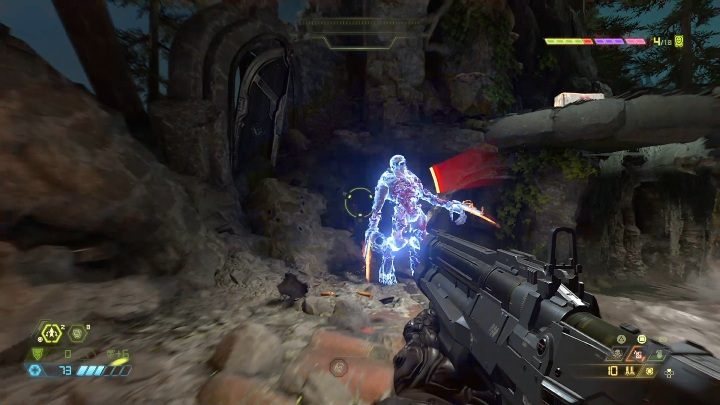 This knight has deadly energy blades and will try to cut you in half. The most effective defense technique is to jump away from him. Try to maintain a considerable distance and finish him off with a long-range weapon.

As soon as you see him, you must deprive him of his cannons. He can attack you from a great distance with a flamethrower. Destroy his weapons in order to defeat him.

It's an armored version of Mancubus. His armor can absorb entire magazine of your weapon. The most effective way to get rid of this monstrosity will be a Blood Punch. Use it to destroy his armor and then defeat the enemy. 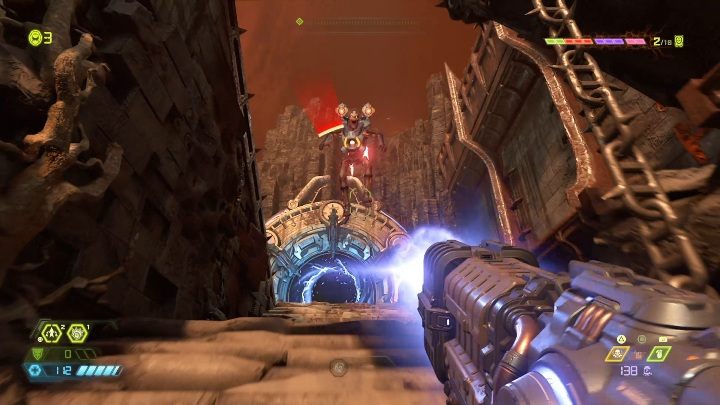 Don't stand still while fighting this enemy. Use dashes and double jumps so the enemy won't be able to track you.

Destroy the rocket launchers of the enemy and get rid of the monster. 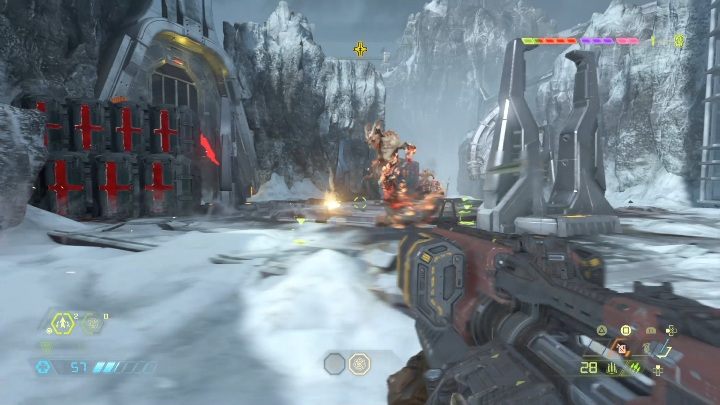 These snake demons can cause goose bumps due to their fearsome appearance. They gain an undeniable advantage due to the fact that they move with great speed and agility.

Additionally, they can strike you from a distance with whip blades hidden in their forearms.

A great way to deal with them are ice bombs or grenades, which will allow you to win the fight.

This enemy is teleporting around the map to put you in a state of terror and gain advantage against you. The best way to deal with this monster is to freeze him with an ice bomb. 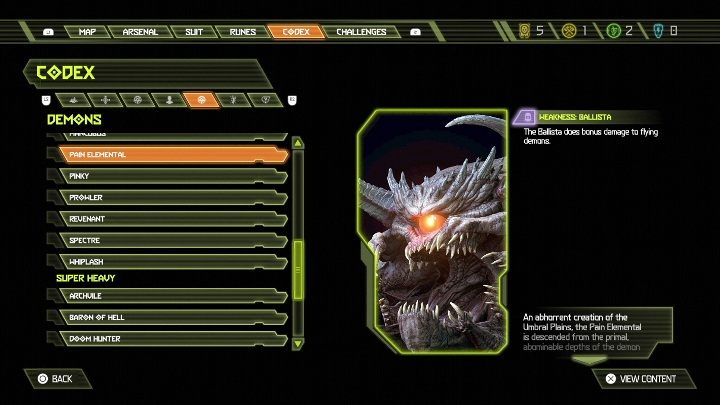 A demon that throws out Lost Souls doesn't sound like the opponent that all players dream of. You can defeat it by using the Ballista. 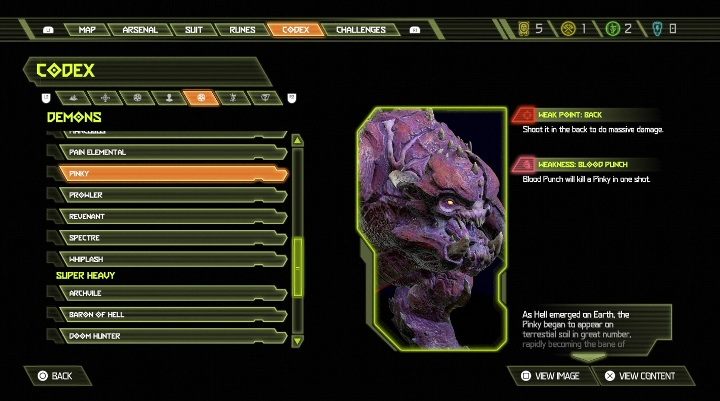 This enemy has a heavily armored front, but an extremely vulnerable back. Jump behind it and attack it from the back with a series of bullets. 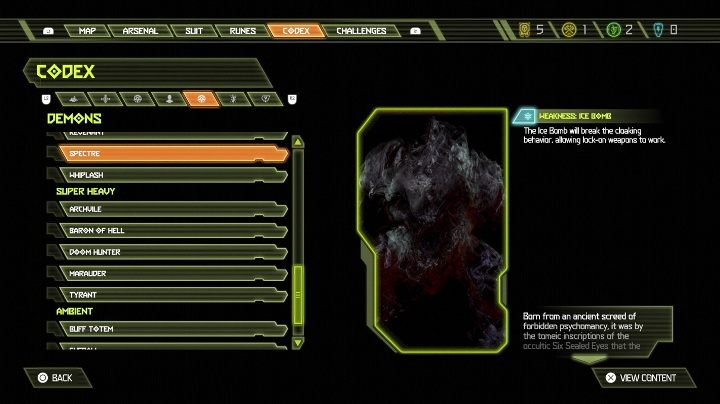 This is a quite unique opponent due to its invisibility. Stop it with ice bombs and then kill it in the same way as Pinky. 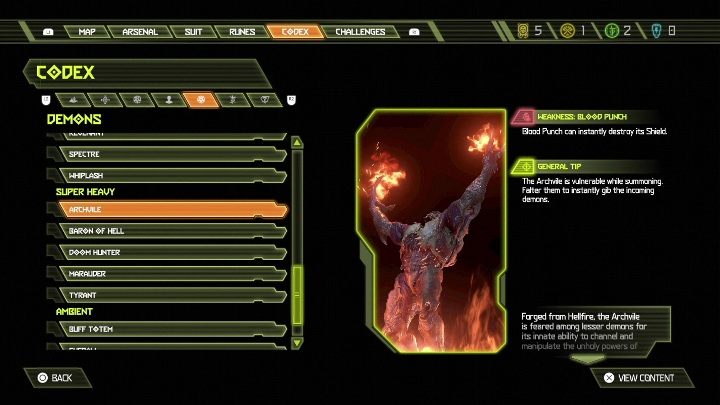 The Arch-vile strengthens and enhances movement speed of other demons. Arch-vile is a serious threat and should be treated as your primary target. 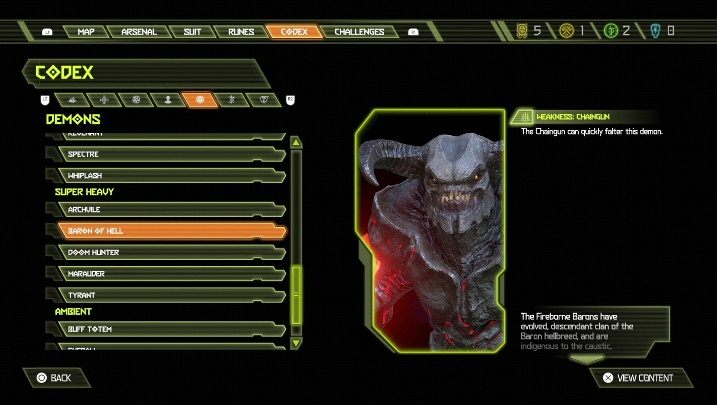 Let's start with the bad news. The Baron of Hell can charge at you, perform fiery strikes, has blades instead of shoulders, and is terribly fast. So, what are the good news? You can just forget about all that issues, use Chaingun to stun him and finish him off. 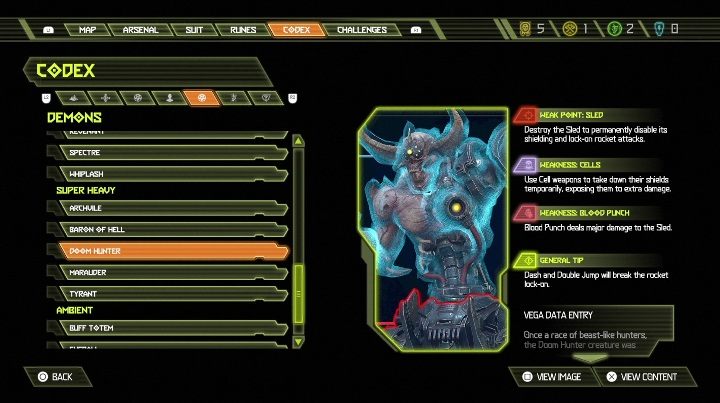 A Doom Hunter can cause a lot of damage from a distance. Additionally, it hovers above the ground thanks to its tank-like lower half of its body. You must destroy the lower part first. Then he will no longer be able to use the shield or rocket launcher.