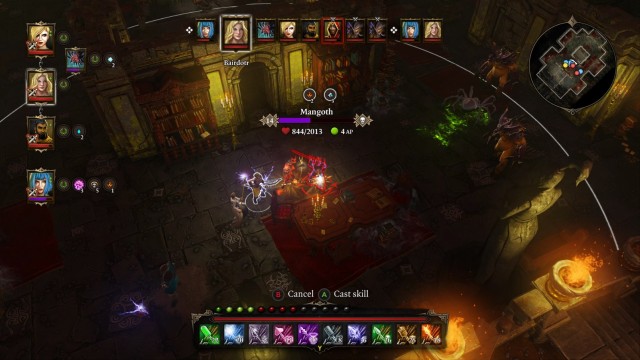 Mangoth should be knocked down all the time.

The encounter with Mangoth is, aside from the Braccus Rex fight, one of the most difficult encounters in the entire game. The boss itself is not that dangerous, but the demons he summons, and the fact that the party of the player is surrounded make the whole difference.

Mangoth will summon three fire demons (the same ones as during the "Mangoth's Servants" encounter) and a pair of ones having practically every element at their disposal, as well as a huge pool of action points (you've already met this type of enemy, during the encounter with Evelyn). As it was mentioned above, the biggest difficulty during this encounter is having to deal with attacks from every direction, and to make matters worse, with area of effect spells. You can make this fight a lot easier - but you will need a couple of items to do so. 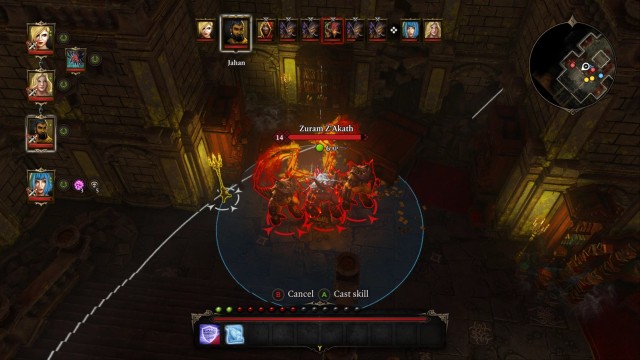 After a single Hail Storm spell there won't be even a wet stain remaining.

Before the encounter starts, redistribute Teleport scrolls between your party members, and give one of them the Hail Storm Spell (or use it from Jahan's spellbook, if he has already learned it). As soon as the fight starts, use one of your characters to stun (or knockdown) Mangoth (he is extremely vulnerable to knockdown), and then teleport the three fire demons located in the western side of the room close to each other, but at the same time as far away from your team as possible. When you've done it, use the Hail Storm spell on the enemies - the spell deals huge water damage, which is extremely effective against fire demons, and as you've probably guessed, will get rid of them in one go. 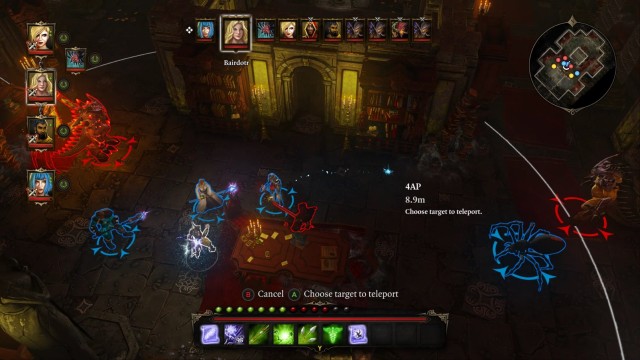 Try to block the demons on the right side with your summons.

When they are gone, summon two creatures, one for each remaining demon, located on the eastern side of the room (you can use scrolls if you want) - the type of a summon doesn't matter, as those demons are using every element. When the summoned creatures have the demons' attention, use your whole party to take out Mangoth (who should be knocked down all the time). When the only foes remaining on the battlefield are the demons, take them out one by one by using your whole team.

If you don't have access to the Hail Storm spell, and you lack the scroll, you can purchase it from a number of merchants in cities, as well as craft it on your won - details on that can be found in the Crafting section of this guide.