Chest behind the skull statue.

Treasure will be available to take aftrer destroying the Iron Maiden - torturing tool.

Chest in the tunnel to the prison.

3  Two chests hidden by the wall.

Chest 2/4  Second chest of four to find, where all four allows to open "Last Chest" chest in The End of Time.

Rewards: new rooms at your disposal.

The Imp, residing in the End of Time, asks you to find and retrieve similar stones to the one that Evelyn used. The more of them you find, the more rooms will be unlocked.

To get out of this room, look through the telescope, and then the Imp should open up a portal to the main hall. He will show you around for a short while. Afterwards, speak with the woman standing near a golden paining, and then with the Imp again - he will award you with a portable portal, which will allow you to teleport to the second pyramid. 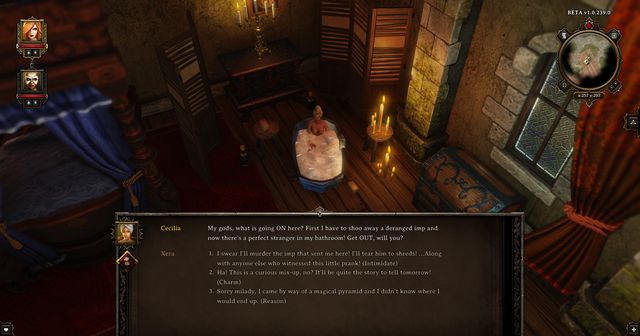 After using the teleporting pyramid, you will be moved to a bathroom, in which a woman takes a bath.

To leave this place, use the icon on the right side of the screen and teleport to a different place.

After getting back to the city, you can use the pyramid to find the second stone. If you are playing co-op, give the stone to your partner, and keep the original one for yourself. This way, you will be able to teleport to each other at any time.

The first stone can be found during the "A Mysterious Murder Mission" in the tavern, on the crime scene.

The second stone can be found by the captain of the undead pirates, in the "Crabs vs Skeletons" quest.

The third stone can be found to the east of the city, where you will encounter hostile fiery undead. Go along the way all the time, and after passing a huge magma monster, you should be able to see it lying on the road.

The fourth stone is in Evelyn's possession, who will be selecting a patient in a medical quest: "The Apprentice of the Stone".

The fifth stone is in King Braccus Rex's possession, who resides in the dungeons of a church, to the north from the first city. You will gain access there after finishing the "A mysterious Murder" quest.

The sixth stone can be unlocked in "The Initiation" quest, after you've solved all the riddles.

The seventh and eight stone can be found after finishing "The Initiation" quest - after that look inside Loic's hideout, located under the flap in the church.

The ninth stone can be found in the King Boreas' Treasury.

The tenth stone can be found in the temple, where you need to go to get the Leandry's blood.

The eleventh stone can be found in the prison, in Hiberheim, in which the witch resides, in the "Find the Witch" quest. It will be dropped after destroying the "Iron Maiden".

The twelfth stone can be found after destroying the totem in the goblin village, in Luculla Forest.

The thirteenth stone can be found in the Maradino cave, required in the "Fredrick's Blood Stone" quest.

The fourteenth stone can be found in "Temple of Dead", by Cassandras grave. You will collect it during the "A Forge of Souls" quest.