Priest Loic of the Silverglade gave you a book that allows you to become the Immaculate Follower. Read it and then, talk to him again and take the test. The answers are:

Then, the priest wants to subject to another trial. You need to go West. This starts "Infiltrating the Immaculates". 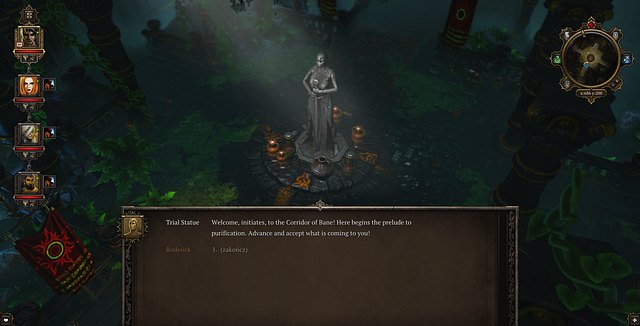 The talking statue, during the test 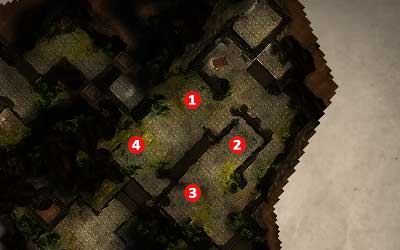 In the next room, there are four levers.

The solution is on the Northern wall. There are three levers, next to each other, and the first two, from the left, need to be leaning to the right, as far as possible. The last one needs to be straight. Pulling the lever opposite them, in the last place, opens the passage ahead.

In the last chamber, at its end, you find a blood gem , which unlocks another hall in your "house". Then, climb up the stairs and you will find a priest that dislikes the fact that the stone healed you, along the way. After a while, he returns with guards and a battle ensues. IF your level is lower than theirs, this is going to be an ordeal, but you can handle it. The main thing to remember is that the elementals summoned around them and a combination of fire and acid. If your chances at a hit with a sword are low, try to knock the enemy down with magic, because you will then have a 100% chance to hit. Additionally, always kill the Priest, at the beginning/ It is best to teleport him among your characters, right at the beginning, because he will otherwise, be healing his allies, and also rejuvenating them. Loic's self-healing is strong so, leave him for the end. 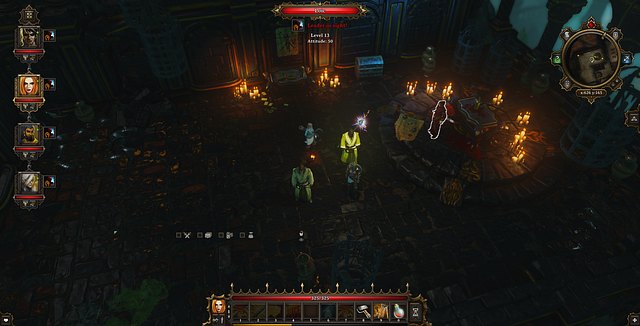 After the conversation with Loic, the battle begins

After you have defeated your opponents, take the key to the hatch in the church and teleport into the village. Enter Loic's office and through the portal.

Now, go South-Eastwards and you should find an entrance to the hidden cultist village. To enter, you need the amulet that you collected from Loic. Once you show it to the guard, he will have no problems with that. You can explore the village but, there is nothing of interest there. Leave and go West, towards the ruins. If you do not have anyone with good perception, it is better to cast spells to your feet, because there are lots of traps in the ruins.

Find a descent to the temple there and try to convince the guards to let you through. Inside, it turns out that the stairs are collapsed. Light all of the four nearby torches to unlock the passage to the lower level.

There, you encounter a priest that wants to make a sacrifice of several people. Once you approach, he disappears and summons two demons: of fire and of acid. Against them, you can only use water, air and physical attacks. It is a good idea to summon a fire elemental to block them off. Additionally, they will be supported by two archers, which are best if eliminated in the first place. You can try to backtrack, so that they approach. The fight in a larger area is much more difficult, than if you had them all clustered together - especially that the demons do not worry about people and their attack may also affect their allies. 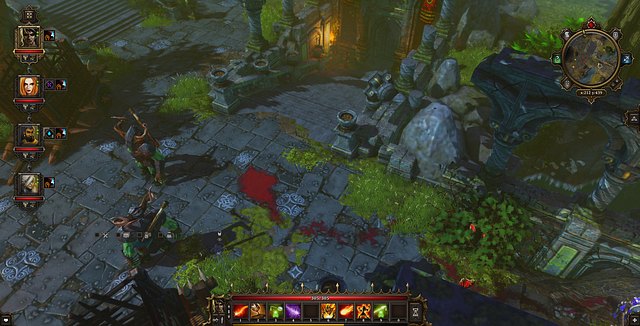 The entrance to the secret temple

After you defeat them, find a lever on the right side of the chamber and the altar will slide away. Thanks to this, you will be able to climb down. You need to find four switches there, to unlock the passage to the secret chamber with the woman's blood. The buttons need to be pressed in the provided order. If in need, you can always find "The Necronomicon of Cooking", where the right order is provided. When it comes to cardinal directions, use the compass on the ground, close to the door.

The first one is on the stairs, next to the floor with the compass painted on it. Directly under the coal stand, where you can light and put off the fire.

The second one is behind the candlestick, on the right of the entrance, next to the bookshelf.

The third one is on the left, on the wall behind the columns.

The fourth is on the last wall to the North of the entrance, opposite the columns.

After you enter the middle chamber, there will appear the priest again, who summons his minions. It is a good idea to hide, then, in the smaller chamber and wait for all of them to approach, and then attack. The demons are very tough, though and invulnerable to fire so, if you do not have any water AoE spells which deal high damage, this may be an ordeal for you. Once they enter the chamber, it is a good idea to stun them and freeze them, as often as possible. If you, still, cannot make it, and you know that you are going to lose, you can run up to the blood bottle, snatch it and escape the fight (separately, as each of the characters).

Return then to the white witch to end this quest and start "A Forge of Souls".