A quest in which you have to trace the reason of the plague of undead, obtained from the commander or right after leaving the church. However, you cannot complete it until you complete the "A Mysterious Murder" quest.

You will get the quest about Rex after killing Evelyn in "A Mysterious Murder" quest. Remember to take her amulet. When you have both quests (or only the second one), make your way to the city and then head north, to the church.

You will find a group of cultists there. As soon as they see you, their leader will run to the tomb below and you will have to fight his companions. The first fight is not difficult. Actually, a fire elemental and a solid fireball will be enough to crush everyone.

To open the passage to the lower level, you have to find four paintings and press the buttons behind them. The key to the gate where one of them is, is located near one of the benches by the wall. When the passage opens, go down and head through the portal, using the amulet that you've taken from Evelyn. You will see a scene between Zombie Jake and Thelyrone.

In the next chamber, you will find king Braccus Rex, who has been resurrected. You should not fight if you're below level nine. It is because he summons the lighthouse guardian, the undead knight - baron and the double elemental, such as the one north of Cyseal. Moreover, Rex himself has a spell that can kill a whole team with its members having 400 life each. 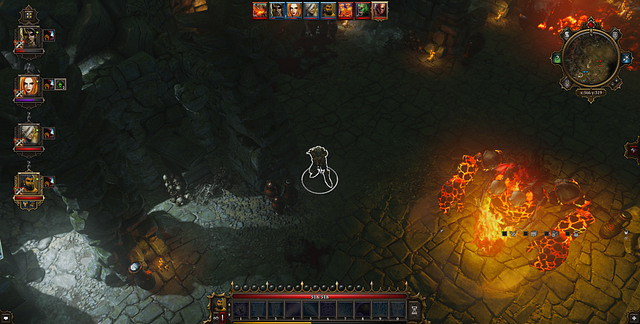 The king summons other bosses from around the town.

Before the fight starts, prepare fire and ice elemental summoning spells. It will be your most important spells in the battle. It would be good also, if someone in your team had acid spells, because Rex is vulnerable to them. The fight itself looks like this: As soon as the battle starts, you should retreat to the door through which you got there and place two heroes on each side of it. Now, exactly at the entrance, you can place two elementals next to each other, or first fire elemental and then ice elemental. The fire one will be absorbing Rex's spells and Twins by Fire attacks. If you have explored the vicinities of the city, you should know all the bosses and their attacks. Only the guardian now has a new acid attack.

Because of their size, twin elementals and Rex will not be able to go through the door and will be forced to attack your fire elemental, who won't take any damage (as long as you place the elementals in the right place). The only one that can go through, is the baron. When he does, attack him with the whole party and he should die rather quickly. Next in line should be the guardian, because he shoots from distance. Use your elementals' range attacks to kill him. When he dies, you have only the twins and the main boss left. Don't attack the twins with fire because it will only heal them. Use ice attacks, which will massacre them. If, by some miracle, the twins or Rex have managed to go through your barricade, your water mage should teleport them back to the chamber.

After your ice elemental kills the twins, it will be only Braccus left. Don't attack him with fire, but use ice, acid, water or earth. He is also immune to stuns, but he can fall down on ice, so it is good to place some under his feet. When he is enraged and near you, you have to teleport him back. This way he won't be a problem.

After killing him, return to the commander to receive the reward.