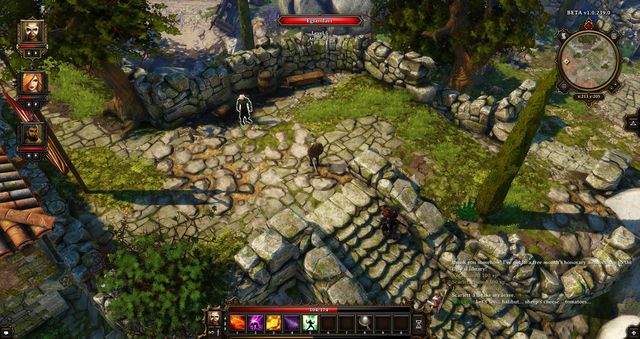 This is where you meet Elgandaer for the first time

Eglandaer, an elf that you can encounter close to the graveyard, asks you to meet him at the first floor of the King Crab tavern. Walk inside and climb upstairs. Take a look into the room with the opened door and listen to what the elf has to say.

It will turn out that he wants you to kill Victoria, a female orc that can be found at the first level of the library. Allegedly, she belongs to the tribe that murdered his family.

You can convince Victoria to give back the amulet that the elf wants, as a proof that the orc has been killed.

You can kill the elf and inform Victoria of your deed.

You can kill Victoria and take the amulet away from her. After several blows - while holding down the ctrl key - she will start attacking you.

You can tell the orc that you try to arrest the elf. In this case, you need to pickpocket (2+) for the bloody amulet, and give it to the watch commander. Return then to the elf and watch him arrested. After that, go to Victoria and inform her of the arrest.