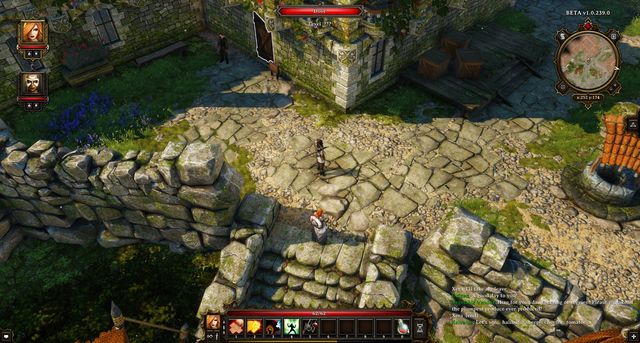 You will be offered membership in the guild, by the character at the door.

In front of the entrance to the tavern, you will meet Mendinus, who will ask you whether you would like to join his guild. If you accept right away, you will get a quest for destroying a robot in a cave on the north.

It is good to go to Arhu and talk to him about the robot. He will give you a pilot and tell you that the manual is somewhere in the office (you will get the "Arhu's Failed Experiment" sub-quest, which is connected to this one). You will find it on one of the desks. You should read it and memorize the codes.

Leave through the eastern gate and go North. The entrance to the cave is being guarded by ten level five enemies. The best idea is to attack in a way that allows you to kill one boar, which will then burst with acid, and cast fire over that, to make the nearby two catch on fire. They should be quick to die and, thanks to the explosions, the acid and fire cloud will expand. You now only need to retreat with your part and wait for the rest to start chasing you across this area. They should be unable to reach the end and, even if they do, finishing them off should not be problematic.

Inside, you meet a soldier who asks you to help him fight the robot.

You can fight him the normal way or using the pilot. If you use it however, you won't get any experience or loot. You can however, deactivate his armor, which will make him weaker. Remember that the codes do not always work, even if you press the right combination. Sometimes you have to press it two or three times so that it could finally work.

The boss himself is resistant to knocking down, but vulnerable to freezing. You will find use for spells like Rain and Bitter Cold here, which will freeze the robot. An additional bonus to this combination is that you are wet, as a result, and the robot's attack threaten you with burning. Rain weakens this effect. After it is frozen the robot is tougher but, it cannot attack, thanks to which you stand a chance of rescuing more soldiers.

After you kill the boss, go to Cecil's office, next to the tavern, to complete "The Fabulous Five" quest.

To complete the "Arhu's Failed Experiment" quest, enter the basement in Arhu's building and find the treasury.