Beach
Quest:
The Talking Statues - after reading a journal by dead body

Beach
Quests:
A Shell on the Beach - shell Ismashel asks for a favour.

The flaming ship
Quests:
Fire!Fire!Fire! - You receive this quest from the citizens, right after you enter the city.

The pier beside the shipwreck
Quests:
Shipless Sailors - You receive this quest from the three sailors.

Fish stand
Quests:
The Fish Thief - once you approach the stand, the thief will ask you if you want him to steal the fish.

The Commander's office
Quests:
You receive all four from the commander Aureus:
The Scaredy Pact,
Lost Archeologist,
Legionnaires at the Church,
The Undead Scourge.

The edge of the market
Quests:
Little Bo Berta Lost her Sheep - You receive this quest from Berta

Tawerna King Crab
Quests:
The Fabulous Five - from Mendius near the entrace to the building,
Kitty Love - You receive this quest from Sam, the cat (you need to have the PetPal skill).

The cemetery
Quests:
The Philosofer - You receive this quest from the author's ghost (you first need to dig his grave open). To solve the riddle you need to answear two times denial and third one confirm.
Points of interest:
Once you dig open the largest bit of soil, in the middle of the cemetery, you will find a tunnel, where you can find the undeads.

Festival site
Quests:
Warming the Crowd - You receive this quest from Galagher.
Point of interest:
Remember that place - talking head which you'll see there will be used in other quest!

The clinic
Quests:
The Aprentice of the Stone - You receive this quest from Evelyn

Fortifications between the undertaker's and the cemetery
Quests:
Elf-Orc Blood Feud - you receive this quest from Eglandaer the elf

Guards behind the warehouse
Quests:
Charmed, I'm sure - quest form one of the guards.

Beggar
Points of interest:
In destroyed building you'll find Beggar - the next victim of The Talking Statues. You don't have to talk with him to finish the mission, but you'll gain additional expierience points.

Abandoned hut
Quest:
The Strongman - key to cellar is located in eastern part of the hut.

Mill
Quest:
The Legionares' Will - from two skeletions by mill

Rocks near church
Quest:
The Wishing Brothers - quest from well

Graveyard by church
Quest:
The Preacher of Earthly Delights - quest from ghosts at graveyard

The King Crab Tavern
Merchants:
Bartender - food,
Shereth (Upper floor)- "Witchcraft" and thievery spells.
Party members:
Madora - warrior for hire.
Points of interest:
In the inn's cellar, there is a chest enclosed in a trap of fire and poison.
On upper floor in next door from Shereth you'll find elf Englander's room.

The market
Merchants:
Cylia the Enchantress - Basic crafting items. water and air spellbooks,
Flether - Basic items for crafting of arrows and spellsbooks for the archer,
Gerome - Treasure maps,
Vegetable / Cheese / Fish Vendor - Food.
Points of interest:
On the square you can find Captain Jack, which is looking for man to work (The Shipless Sailors).

Abandoned house
Points of interest:
You can find a ruby here (with Perception sufficiently high) and a chest. Into the building is only one way through the tunnel in the middle of cemetery. To exit house find a portrait on the wall which you can move - you'll find a button behind it which opens the door.

Harbor storage
Points of interest:
To access the room that is being guarded, you need to use the "Unlock Magic" spell.

The grave in the garden
Notes:
Do not dig open! Explodes.

Entrace into cave – Cave isn't connected with any quest, exit is behind waterfall nearby.

Abandoned house - In the abandoned house (14) you can find a ruby. You character needs to have some level of perceptiveness to discern it. It is on the floor, next to the fireplace.

Garden at the back of the clinic - Behind the building (11), where you can meet Evelyn, there is a sheep and a grave next to it. In the beta version, you need to dig it open, because it will otherwise explode, which always ends in death.

The Inn - In the inn's basement (8) there is a large chest surrounded with traps. If you have the ability of telekinesis, you can, simply, move the chest over the traps, without springing any. Otherwise, you need to cover both of the buttons on the ground with some items. The key for the chest is also in the basements, in the other room.

Harbor storage (15) - To access the room guarded by the soldier, you need to buy the "Unlock Magic" spell, which can be obtained from the merchant at the upper floor of the "King Crab" tavern. Then, you need to return and talk to one of the patrolling guards, and tell him that the other one is deriding him. The enraged guard will go to have a word with the other one. Finally, they will be approached by the sergeant, who is keeping watch at the door that you want to open. After you open the lock, you can enter. 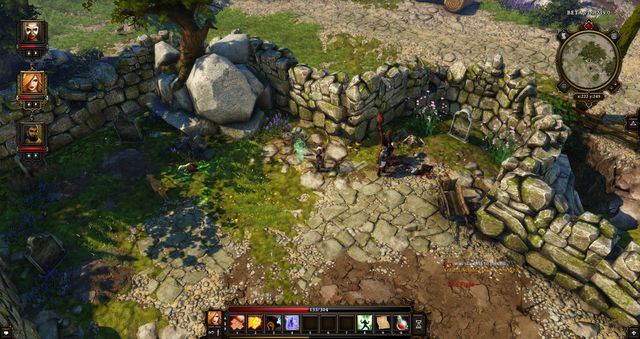 There is a tunnel at this cemetery

City cemetery - At the cemetery (9), if you dig open the largest grave, in the center, you will gain access to a tunnel with a multitude of the undead inside. Inside, there also is a boss waiting for you and, if you reach the fork, one of the branches goes to the surface and the other to the chest in the city, which you cannot access from outside. The spade is at the cemetery.

Forging station - Behind the abandoned house (14) there is an anvil, which you can forge weapons on.

Madora - Madora is a character of the Knight class, who uses a two-handed sword in fight. You can encounter her at the "King Crab" tavern (8) and she will gladly join your party. She occupies the first line in combat and it would be good if she had a healer.

Jahan - Jahan is a Wizard and he uses spells like teleportation, healing and rain. Thanks to this, he is perfect for a healer and the character that pulls enemies towards you or pushes them away. Since you do not have too many of your own spells, he is an indispensable part of the party. You can meet Jahan at the first floor of Cecil's office (7) next to the "King Crab" tavern.