this is the first difficulty level available for each of the newly-created character. It allows you to learn about the game world gradually and to acquaint yourself with the skills of your character. Since the opponents should not pose too much threat to you, for the majority of the game, you can experiment here a bit, both while choosing skills and the available equipment. The only attribute to pay attention to while choosing equipment is Damage Per Second - the higher, the better. In case some monsters are starting to become too difficult to deal with, invest in equipment that will raise your Core Attribute and Vitality. With a properly selected set even the boss battle should be a walk in the park. It needs to be pointed out here that at the normal level, you can now encounterChampion and Elite opponents, who drop valuable items, but they are difficult to defeat.

The hard difficulty level is the second of the available four. This mode is available immediately after you start the game, together with the Normal difficulty level. The first thing to notice is that the enemies are more resistant to our attacks and at the same time can deal us a bit more damage. The second important change is an additional skill (modifier) which from now on is added to Rare Monsters (yellow names) and Champions (blue names). Luckily, our character is not left behind: it's on Hard that we'll unlock the better part of our most powerful skills. The sole gameplay shouldn't be too different from what we've been doing so far: testing new skills (try to use each one of them at least once so as to know what will be available for a future use) and collecting more powerful equipment according to the same rules.

Also this level is available immediately after you start the game. Mobsters there generate even more gold and provided more experience but, of course, they are more difficult to defeat. This level is recommended for the players that already have more health and rare items. It's high time to review all acquired skills and bet on those with highest effectiveness instead of attractiveness. The first thing to do, however, is to decide upon defensive skills, such as Diamond Skin for Wizards or Smoke Screen for Demon Hunters. Although we'll be using them only sporadically during more challenging battles with stronger packs of Champions, it's best to slip into the habit of pressing the button responsible for defensive skills rather sooner than later.

The other skill category to look into and make a more frequent use of is the so called Crowd Control (CC). It includes every skill than can either stun, freeze, force to flee or slow down the enemy. They give us time to fall back, drink a healing potion or move to a better position. Remember that a frozen enemy is an enemy which cannot deal us any damage - this way we can save up our defensive skills or gain a few precious seconds before they cool down. Combining these two skill types should provide us with a sufficient defense up to the completion of Expert. It's also good to remember about an option called Elective Mode (ESC ( Options ( Gameplay): enable it to be able to bind any skill to hotkeys (1-4) and both mouse buttons. To do it, press the right mouse button on the skill bar, and then select the category and the skill you want. This will allow us to use two or even three defensive skills at once or bind Meteor to the left mouse button. All according to our will. 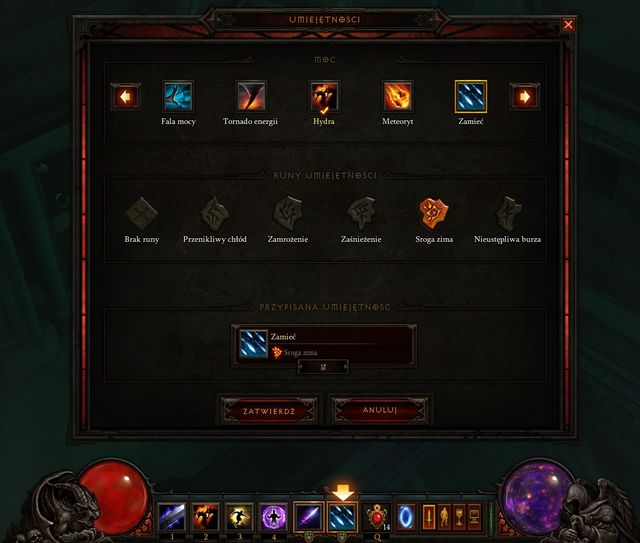 The Elective Mode enables the use of two spells from the Force category at once, with one of them bound to the right mouse button.

The last thing to polish up is equipment. It's imperative to obtain items that increase the Core Attribute or Vitality, preferably both of them at once. Now, it is easier than before, because the game determines the items based on your statistics. While choosing the weapon, you need to be guided by the highest damage possible and, right after that, presence of the basic factor.

The Master mode becomes available only after you have completed the fourth act at any, lower, difficulty level. You will not have too much time for experimenting with new skills here, unlike at the previous levels, because you need to rely on the mobility of your character, during combat. Even if your character is very tough, it is a good idea to dodge from some of the blows, because they may leave you surprised, after it costs you a half of your health bar. This difficulty level has been designed for fighting in groups and when you have several legendary items on you, for the sixtieth experience level. Although you explore the area in a group of four, the monsters are stronger. Still, it is easier to kill them, than when you are alone (even if you have several legendary items on you). Additionally, the presence of the other characters in your party provides you with bonuses, thanks to which you are more likely to obtain magical items. The more people around you, the better for you.