In this chapter of our guide to Deep Rock Galactic we have prepared all the relevant information about Machine Events - what they are, how to activate them, how to complete them and what rewards you may get for participating in them.

Machine Events is one of the end game mechanics available in Deep Rock Galactic. Machine events occur randomly and can appear in any regular mission, excluding Deep Dives. To take part in Machine Events, you need a special Tritilyte Key, which can be obtained after you level up a character. At the time of writing this guide, there are four such events in Deep Rock Galactic: Ebonite Mutation, Omen Tower, Tritilyte Shard, and Kursite Infection. Each event requires you to complete a different task and rewards only those daredevils who possess a Blank Matrix Core.

Ebonite Mutation is one of the random Machine Events that can occur during gameplay in Deep Rock Galactic. Once the event is activated, players will be attacked by mutated rocky opponents, who are immune to all firearms, fire attacks, frost attacks, and explosives. 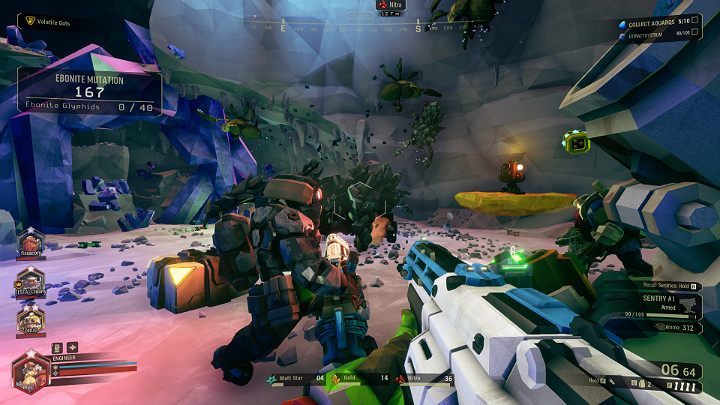 You can only hurt rocky opponents in a melee battle. Therefore, you'll have to rely on close combat and use a pickaxe. It is also worth noting here that unlike all other throwing items, Driller's Impact Axes are counted as a physical attack so they can be used to fight against rocky opponents.

From time to time, the machine ejects special modules in a random direction, which can charge the dwarf's pickaxe with a special power. The latter reduces the charging time of a strong attack. With such reinforcement, it is much easier to defeat rocky opponents.

Omen Tower is one of the random Machine Events that can appear during gameplay in Deep Rock Galactic. Once the event is activated, a deadly tower will slide out of the main container, divided into several segments, each of which has been armed with a different weapon and may severely injure the target - especially on higher threat levels. 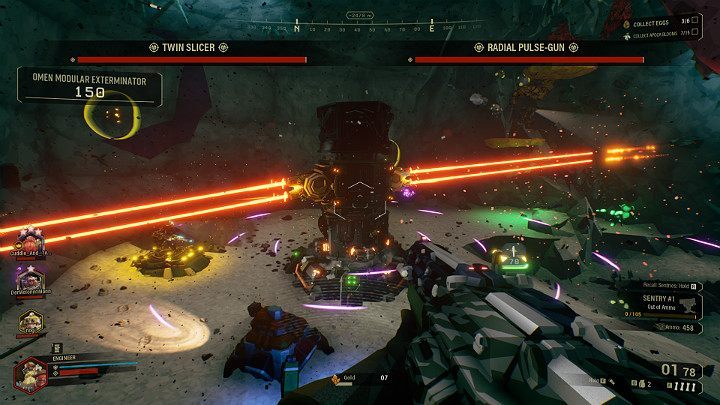 The equipment of the tower is entirely random and each Omen Tower may have different weapons:

Stand on the glowing outer platforms to expose the green modules on the base of the tower and then destroy them to damage the tower.

Tritilyte Shard is one of the random Machine Events that can occur during gameplay in Deep Rock Galactic. Once the event gets activated, a large crystal will emerge from Earth, which must be destroyed in a specified time to successfully complete the task. 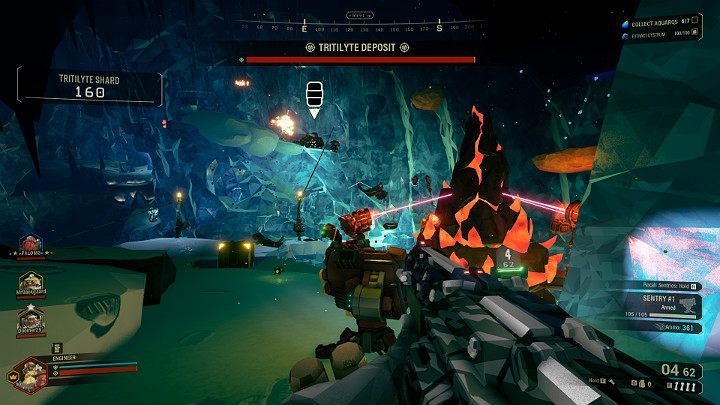 First of all, find the Bomb Dispenser marked with a black barrel with a white border. Then, take the bombs from it and throw them at the crystal to destroy it. The Tritilyte Shard event can be extremely simple if a bomb dispenser drops near the machine. Sometimes the dispenser will fall in a completely different segment of the cave and only Scouts or Gunners can be able to access it.

Bombs from the Bomb Dispenser are considered as heavy objects so you cannot run with them. The best way to deliver them under the crystal is simply to throw them away - hold down the throw button (by default LMB on PC version) until the power bar recharges to maximum, then release the button.

Kursite Infection is one of the random Machine Events that can occur during gameplay in Deep Rock Galactic. Once activated, infected opponents will appear in this area, and the player's goal is to obtain Kursite Shards so that the machine can perform an analysis of an alien-transmitted infection. 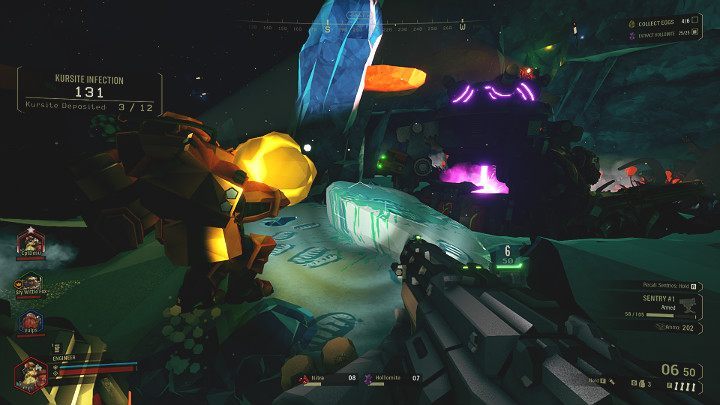 Kursite Shard can be obtained by killing an infected, yellow-glowing opponent. It is worth noting here that opponents in this type of event can be reborn as different species, even as flying Macteras. All Kuriste Shards items must be delivered to the machine within the specified time limit.

Kursite Shards are being considered as heavy objects so you can't run with them. The best way to deliver them to the machine is simply to make a distant throw - hold the button responsible for the throw (by default LMB on PC) until the power bar recharges to maximum and then release the button. Then pick up the item from the ground and deposit it in the machine.

Rewards for completing Machine Events in Deep Rock Galactic are not available for all players. To activate the rewards terminal you will need one Blank Core Matrix item, which you can get for completing your first Deep Dives missions or after completing a Weekly Core Hunt. 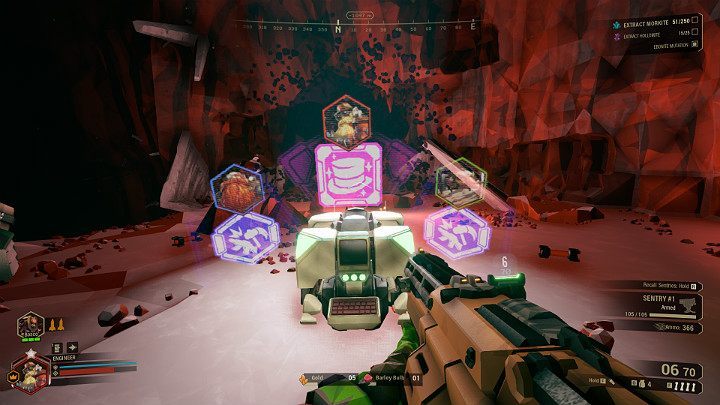 After using the rewards terminal, you will be able to choose between three random prizes, which may include Overclocks for weapons or special Matrix Core Cosmetics, which are cosmetic items that can be crafted in The Forge. What's more, after positive completion of the whole mission, the player will receive additional experience points and credits.

If you have collected all cosmetic items and Overclocks for weapons, then you will receive a special container instead of the standard reward. This crate contains 120 pieces of random crafting resources.