Deep Rock Galactic is an unusual first-person shooter developed by Danish studio Ghost Ship Games. We play as dwarf astronauts working for the eponymous corporation and extract various valuable resources from planets. We also have to deal with various problems and alien attacks that can be encountered in the vast underground cave systems. In Deep Rock Galactic, the player can choose from 1 out of 4 classes that specialize in rock drilling (Driller), terrain reconnaissance (Navigator), team support (Engineer), and combat (Gunner). The game can be played solo or in a 4-player team. The goal of the game is to complete a specific mission, such as collecting a certain amount of raw materials and evacuating from an underground cave system. It is also worth noting the fact that the underground caves in Deep Rock Galactic can be almost completely destroyed thanks to the destructible environment system implemented in the game.

Before you start your adventure in Deep Rock Galactic, you can check out the main tips that will increase your chances of survival in extremely unfavorable conditions in different parts of the galaxy, such as Hoxxes IV. These tips are primarily for new players.

This page answers basic questions about Deep Rock Galactic like the game's availability on Steam, cross-platform option, or its system requirements. It is a small compendium of knowledge about the content and changes made to the game.

Yes, Deep Rock Galactic can be bought on Valve's platform in the so-called Early Access and played even before the official release of the game.

Does Deep Rock Galactic have split-screen?

Unfortunately, Deep Rock Galactic doesn't support split-screen. Each player wishing to participate in the game must have their own copy.

Is the Microsoft Store version of Deep Rock Galactic playable on Xbox One and Windows 10?

Yes! By purchasing Deep Rock Galactic in the Microsoft Store, you get the Xbox Play Anywhere version, which means that you own both Windows 10 and Xbox One versions. Progress in the game is recorded for both platforms.

Deep Rock Galactic allows owners of Xbox One and Windows 10 versions (purchased from the Microsoft Store) to play together.

Which engine does Deep Rock Galactic use?

Does Deep Rock Galactic have a solo mode?

Deep Rock Galactic offers a solo mode. It should also be noted here that Bosco accompanies all those who play solo - this special drone is adapted both for mineral extraction and combat. 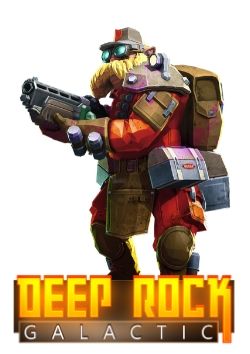 Deep Rock Galactic is a unique first-person shooter developed by the Danish studio Ghost Ship Games. We play as dwarven astronauts who work on mining the resources in caverns that even the bravest of the bravest would not even think of entering.

Deep Rock Galactic for PC and XONE is an unusual cooperative FPS and the first game developed by the Danish studio Ghost Ship Games.

Story in Deep Rock Galactic for PC and XONE is not that complex. We play as dwarven astronauts who specialize in mining resources in the most dangerous caverns that even the bravest of the bravest avoid and were hired by the titular corporation.

Deep Rock Galactic for PC and XONE focuses on four-player coop. There are four classes available in the game: Driller, Navigator, Enginieer, and Gunner. A team made of four dwarves, either controlled by players or A.I., explored the procedurally generated levels in search of natural resources and minerals. Mining and exploration is based on the games advanced destruction system visibly inspired by Minecraft. Cooperation between the players, in both combat and exploration, is the key to success.

Deep Rock Galactic for PC and XONE uses Unreal Engine 4, giving its visuals high and modern quality. The game has an original artstyle based on polygons.