Scout's primary auxiliary weapon is the Jury-Rigged Boomstick shotgun However, after reaching level 15, Scout gets access to an alternative auxiliary weapon - Zhukov NUK17. The shotgun has a huge impact force and is suitable for eliminating targets at close range. Zhukov NUK17 are automatic handguns that have good accuracy and very high firing rate.

The Jury-Rigged Boomstick is the first secondary weapon used by Scout. It is a short two-barrel shotgun that is excellent for close-range combat. The projectiles fired by this small weapon are powerful enough to knock down even a slightly stronger opponent with just one shot. Moreover, during shooting, the player has a chance to stun the target, which is useful in battles against powerful opponents. 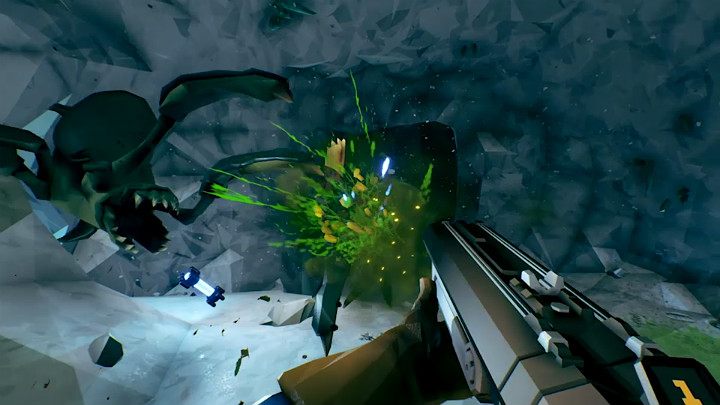 The Jury-Rigged Boomstick has some drawbacks. The main disadvantage of this short shotgun is the small number of shells that can be used, as only two can be loaded into the barrel, which requires you to reload the weapon pretty often.

Like all shotguns available in Deep Rock Galactic, Jury-Rigged Boomstick is only effective at very close range. If you start shooting from a distance, you'll just waste your ammunition.

After advancing to level 15, Scout gets access to an alternative auxiliary weapon - Zhukov NUK17. These two automatic machine guns have extraordinary firing rate and high magazine capacity. Unfortunately, such a high rate of fire is associated with the rapid discharge of the magazine. Therefore, you need to reload the weapon frequently. Zhukov NUK17 also suffers from short range of effectiveness.

Despite its disadvantages, Zhukov NUK17 is a very good choice for all players who use the M1000 Classic as their main weapon. This allows the player to use a robust but slow long-range weapon and a short-range quick firing weapon.