The Deathloop guide contains a set of information that helps to understand the most important principles of the gameplay, as well as to complete all stages, successfully eliminate all the main objectives of the mission and discover 100% of the available content.

The first big chapter is the game guide, which focuses mainly on discussing the unusual formula of the game. The following pages of the guide explain what are the cycleshow the mechanics of rebirth work, how much freedom does the player have, what are final victory requirements in the game, or what weapons and powers are available for the main protagonists. The guide is complemented by a FAQ section that answers a number of common questions, among others, is Deathloop is a singleplayer game, can I save game, and how invasions of other players' worlds work.

In our guide you'll find walkthrough descriptions for all main and side tasks. It is worth noting that in the game there is a lot of freedom of when to access them and in what order. The guide contains extensive tips and hints how to kill 8 main antagonists for the purpose of completing the main storyline. The walkthrough description is complemented by information on collectibles and secrets available in the game.

You will also find the trophy guide which explains how to easily unlock all the achievements and how to earn the platinum trophy in Deathloop. We also included information about controls, system requirements, similarities to the Dishonored series, and how long does it take to complete Deathloop.

In Deathloop , there are numerous main and side missions to complete, however, due to the unusual structure of the game, there is a lot of freedom in choosing the order of doing that. Completing all of them within one cycle will not always be an option.

The walkthrough description chapter is in preparation.

When playing Deathloop as a Colt your main focus is to eliminate 8 main opponents. A separate chapter of the guide describes the confrontations with individual antagonists, which includes tips on how to effectively kill them.

A chapter on bosses is in preparation.

Deathloop it features unique gameplay mechanics when compared to many other action games. In our game guide, we describe all the unusual and more complex mechanics of the game. This knowledge will help you to understand the basics of the game and increase the effectiveness of your actions in subsequent approaches to the campaign.

Deathloop it is a game in which many of the mechanics have been implemented in an unusual way and as a result, understanding some of the issues can be problematic. The FAQ section of the guide includes answers to a Frequently Asked Questions.

Deathloop: all secrets and collectibles

In a separate chapter of the guide, we have included information about the types of collectibles in Deathloop and where to look for secrets to complete the entire game in 100 percent.

A chapter on secrets and collectibles is in preparation.

Deathloop allows you to earn the platinum trophy on PS5. In our trophy guide there are detailed instructions on what requirements each achievement has and how to fulfill its objectives.

Trophy guide to Deathloop it is in preparation.

Deathloop is a game in which it is difficult to give an approximate time of a single playthrough, because much depends on how the player will cope in a given cycle and whether he will focus solely on catching the main opponents, excluding all optional content. Roughly, it can be assumed that completing the game without too much haste should take an average of about a dozen hours.

Learn more about the length of the main storyline and the amount of time it takes to complete Deathloop in100% in the Game length section. 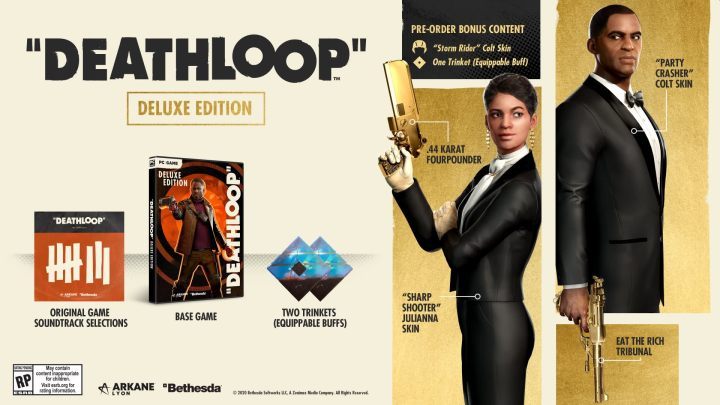 Deathloop comes in two versions - standard and Deluxe. Their basic story content is identical, although the Deluxe Edition offers, among other things, additional items (weapons, reinforcements and others), some of which can be helpful in completing the game.

All Deathloop editions are discussed in more detail on a separate page titled Game editions.

Deathloop: language versions of the game

Deathloop comes in full English language version. It is also possible to set English subtitles and / or dialogs.

This is upcoming Game Guide and Walkthrough for Deathloop Video Game.

We are working on it now. We want to publish this Game Guide close to Deathloop Release Date.

The Most Wanted Video Games Coming in 2021

2021 should unleash the full potential of new generation consoles and GPUs. The coming months will bring many exciting games  including the new God of War, Horizon: Forbidden West, and Resident Evil 8.