Bounty Hunter is a series of missions, which you will only start in the second region, in Tucker's camp and it is from her that you will receive many missions in this thread. After the Price on Your Head (the last mission Chasing Leon) mission, during the exploration you will receive a call from Tucker saying that there is a task for you; you will not receive it immediately after completing the previous mission.

The Rest of Our Drugs 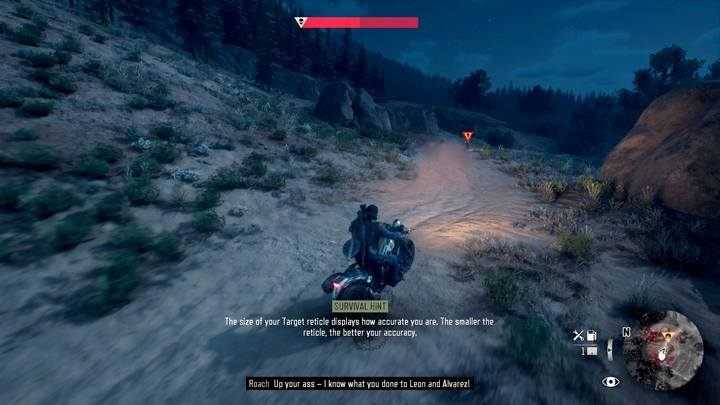 You're in pursuit again; this time the opponent has more firepower and a tougher bike

After the They Won't Let Me leave (You're Safe Now) mission is completed, shortly after leaving the camp, you will be contacted by Tucker. Go to the specified place: the town in the north. Take plenty of ammo and a good sidearm with you (UZI or shotgun). Examine the item on the spot, but adjust your motorcycle so that you can get on it quickly and be ready to give chase. As in the previous mission, chase the enemy and shoot his motorcycle or damage it by battering the vehicle. This time the enemy has a helper - you can ignore him - when you reduce the target's health bar, the helper will disappear. 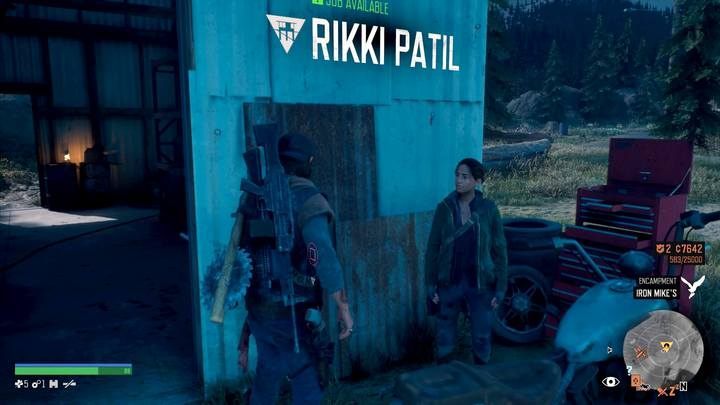 Rikki is standing next to the mechanic's workshop

This task is optional and you will receive it from Rikki when you return from clearing the Ripper Camp in Playing All Night. 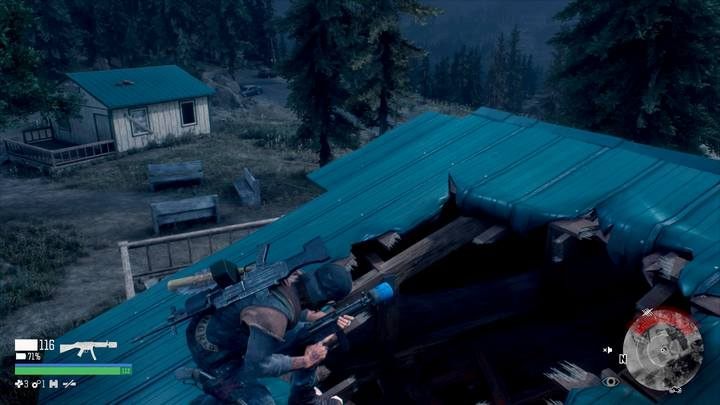 Go to the indicated camp to the west. You must get to the building where Riley is staying. You will hear him when you are near the house. The door is locked, but there is a hole in the roof; you can climb onto the roof using blocks of wood laying against the wall. After killing the target and the other person in the building, search his body and bring the evidence to Rikki. You will unlock the next mission: Flow Like Buried Rivers (Earning Our Keep).

You will begin this mission after you have completed Earning Our Keep: You See What They Did. Go talk to Copeland after you receive a radio message from him about the availability of the task. 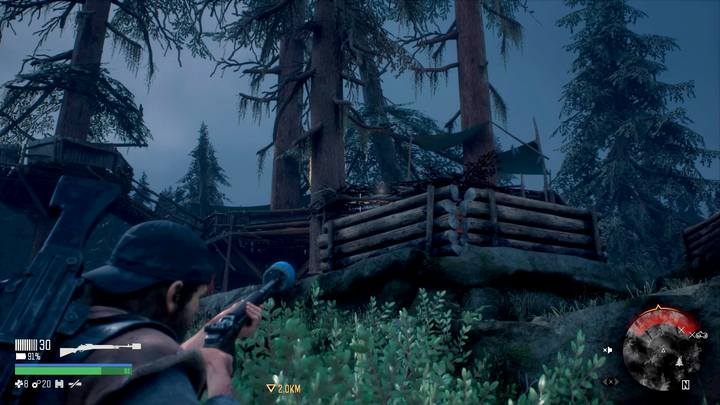 The camp has a lower and upper floor, also with opponents

Head north to an enemy camp and kill all enemies. If you haven't eliminated the horde on the nearby train, you can bring them to the enemy camp to do the work for you. Once you've dealt with the opponents, infected wolves may appear on the spot. It's worth being at the top at that point and provoking them with rocks to enter your line of fire or to use attractor or explosives / canister. To complete this task, you must return to Copeland.

To begin this mission, complete the previous task: Drugged Outta His Mind. 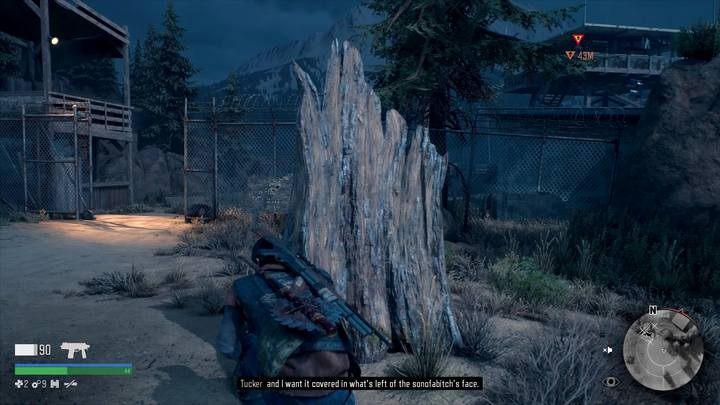 After talking to Tucker on the phone, return to her camp. Your target is the man you find in the camp southeast of the base, behind the mountain. You can sneak into the camp over the fences or start an open battle. At the entrance gate on the tower you will locate a sniper. If you scare the target, he can escape to the high observation tower. You may encounter resistance from additional enemies hiding in the tower. Remember that in order to successfully complete the mission, you need to collect evidence from the target's body.

After you eliminate the target and optionally the other murderers, reinforcements on motorcycles will arrive. Then go back to Tucker for your reward.

Seeds for the Spring

You will begin this mission after you have completed Earning Our Keep: You See What They Did. Wait a little while for a message from Copeland. 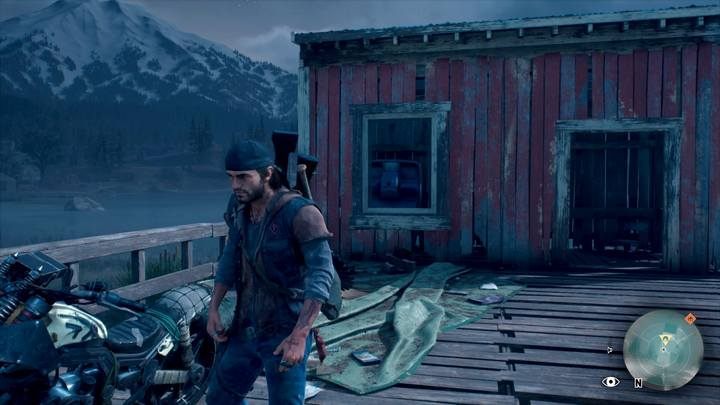 Head north to Iron Mike's camp and prepare your motorcycle for a chase. Examine the item by the stairs on the platform to start the chase. The target travels with two helpers - you can stay away to avoid damage and wait for them to fall off the vehicles and leave the main target by himself.

Mission appears in the diary after completing Rikki related task: I Got a Job for You (Earning Our Keep). She'll contact you on Tucker's radio, and you need to get back to her camp to continue. 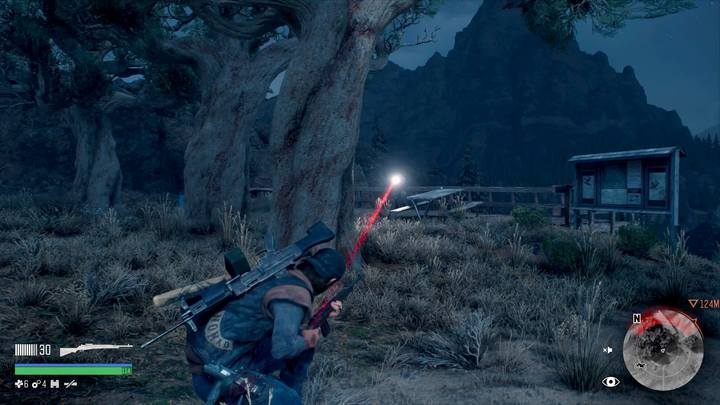 From the west side there will only be a sniper. Sneak and he won't look in your direction.

Take the west side to get to the camp. On the hill you will find a sniper. If you take his weapon (or you have your own sniper rifle), you can eliminate the target from a distance. 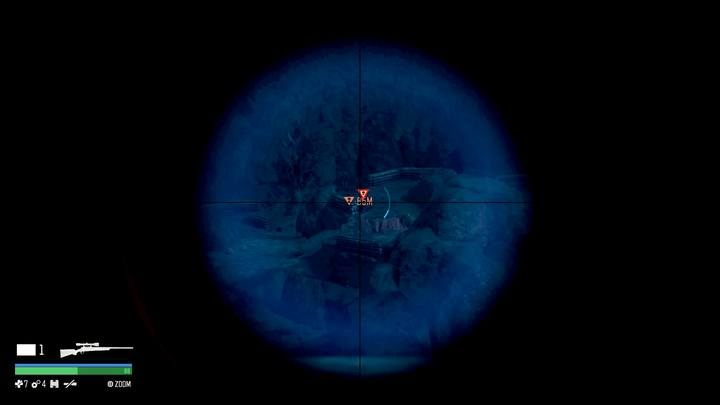 But keep in mind that you still need to approach the body to gather evidence of the murder - however, you can drive around with your bike and not worry about numerous opponents (especially since the terrain is not conducive to sneaking up). Also be careful if you want to act quietly - many enemies have helmets, which makes it difficult to kill them with one shot. For completing this mission you will get a lot of reputation in Hot Springs camp.

Over a Card Game

This mission is unlocked after the Some Kinda Freak Expert (Earning Our Keep); talk to Ricky in the camp. 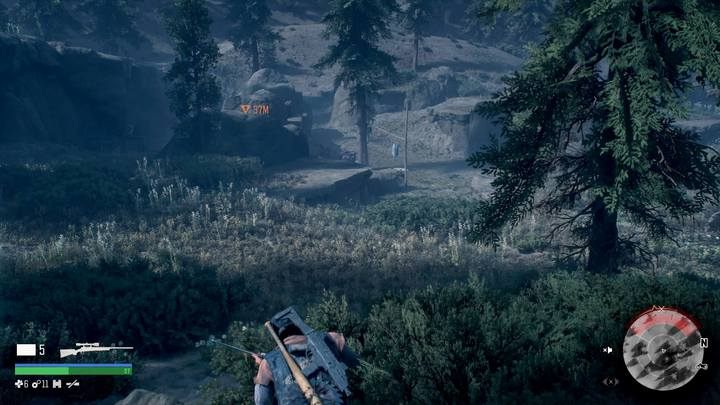 Wait behind the camp until the situation calms down and this way you may avoid the battle.

You will receive target coordinates - Joshua. In this mission you do not need to fight - the Freakers will do the job for you, if you do not participate, and you only need to collect evidence of murder. Sneak into the camp quietly so you don't have to fight the zombies and then quickly jump on your motorcycle.

The task is unlocked after repairing the transformer with Rikki in the Better To Light The Candle (Earning Our Keep) mission. You will get another target to eliminate. This time the task will be a little more difficult... 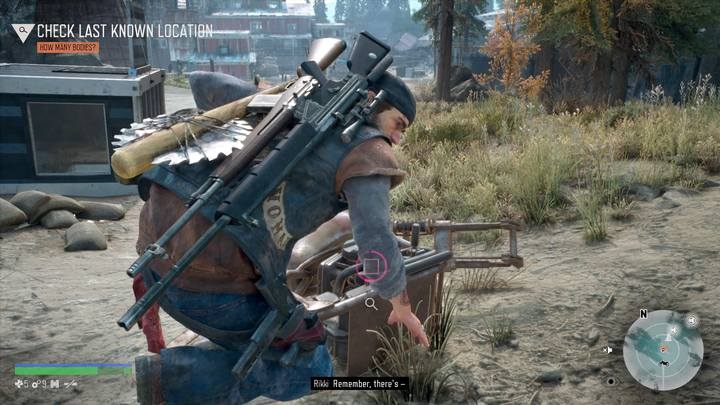 Inspect the bike lying on the road; try not to make any noise, so as not to attract hordes of Freakers.

Go to the sawmill nearby and check the bike lying on the road. Using survival vision, go through the fence and explore two more trails - bodies. When considering the second you will see your target as running from the roof of the NERO building. 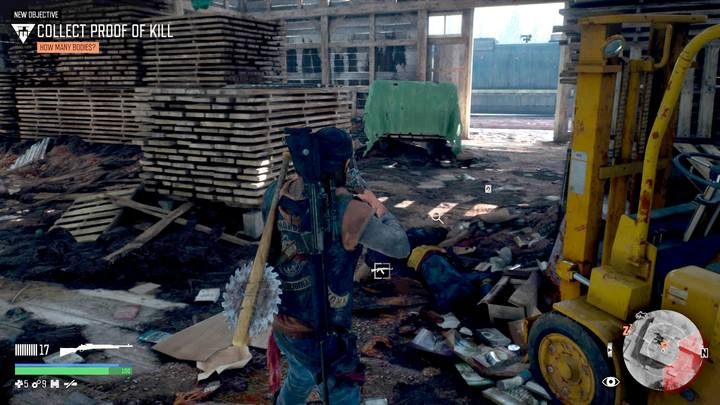 Run after him as quickly as possible to catch him in the red building. If you're late, the Horde will get him - it's a huge Horde, which is extremely hard to defeat without proper preparations. Then all you have to do is run and return for the murder proof when the Horde calms down and returns to its place. Get back with the proof to Rikki.

Part of the Family

The quest will start after completing a series of missions: That's Never Gets Old in the Surviving Isn't Living storyline. Go back to Tucker in Hot Springs; you have to kill Wheeler for her. 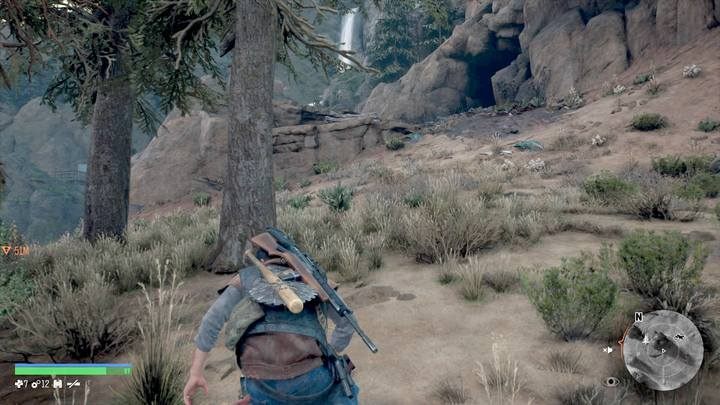 A Horde may reside in the cave during the day.

One solution is to drive the Horde out of a nearby cave in the Eastern cliff (if you haven't already eliminated it); luring them to a hostile camp would be a significant relief. Otherwise, you should quietly use grenades / Molotov's on multiple thugs gathered in the middle of the camp.ó

This mission starts after an initial exploration of Crater Lake and a conversation with Garrett at the top of the hill located in the center of the base.

Go to the southwest part of the map. Head to the northern part of the searching zone to find a trace near the trash. Another trace is in the cave with two mutated wolves. Also, don't forget to collect NERO Injector here. Head deep into the cave, where you will find another four wolves. 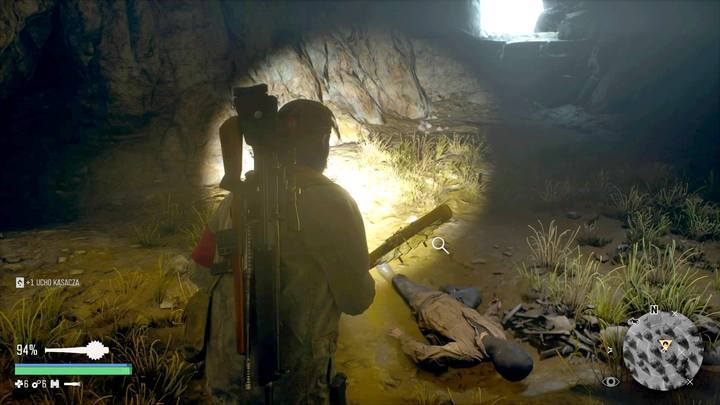 Go west. Keep walking until you find Anderson's body near the exit of the tunnels. Go back to camp with the band found on the corpse. Completing this mission leads to I Know Things Are Strange mission, part of a new plotline called I'm Never Giving Up.

Take Back What's Mine

After I Know The Look (A Good Soldier) mission, you will hear a message from Garrett - he asks you to return to the Wizard Island. You can hear this message after the one from Taylor and Sarah.

Explore the tracks on the snow - they will lead you to the top of the mountain. The enemy base is here.

Go to your destination and investigate the tracks to find the right person. An imprisoned woman is kept inside the building at the top of the hill. However, you have to get rid of all 12 Marauders first. Be careful - they are well armed and most of them have helmets and body armor.

You Got the Wrong Guy

This mission starts after Afraid of a Little Competition? (I'm Never Giving Up). Garrett will contact you. This is another pursuit mission, so make sure you have ammo for your sidearm and a full tank in your bike. 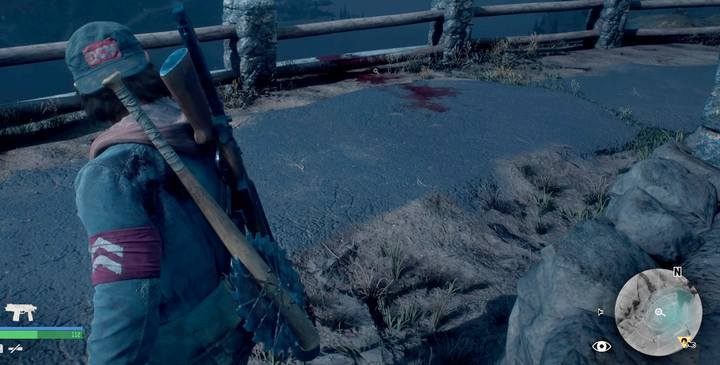 Investigate the tracks behind the building. This triggers the chase - your bike should be parked near that place.

Go behind the building and examine the traces of blood near the rail. The opponent will come out from the back - you can start shooting at him before you get on the bike. It is necessary to eliminate him as soon as possible - he will be soon joined by reinforcements.

You don't want to know

After defeating the Chemult Horde and talking with Garrett during the mission - a cutscenie title how low we have fallen (a good soldier), you will unlock this thread. This takes place in the north-east of the region. A little further east from the selected point is the camp. You will not be able to eliminate the target without getting rid of all the anarchists, as he can be found deep within the enemy base. Watch out for the backup arriving on motorcycles. After killing your target, search his body.

The task is unlocked when completing the quest for Weaver He's not Big on Tunes (a Good soldier). 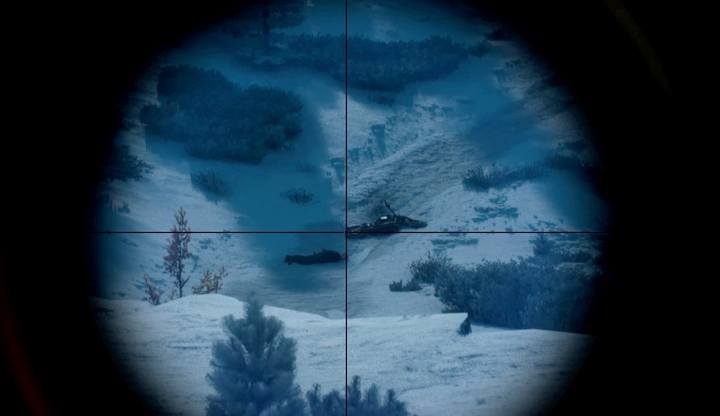 You can get rid of the enemy without getting on the bike...

Go to the specified location and explore the corpse in the hut to start the pursuit of the goal. As usual, bring a fueled motorcycle and a supply of ammunition for your weapons. If you do not have enough fuel to start the mission, you will find a canister in a nearby mine on the hill, across the river. The enemy will run along the road in the direction from which you came (to the south) - he can be eliminated without getting on the bike, if you have, for example, a good sniper rifle.