This page of our Darksiders 3 guide contains a walkthrough for Haven. Among other things, Fury has to climb a ruined skyscraper. This is also Fury's first visit to the Maker's Forge, where you can upgrade your weapons.

Start of the climb 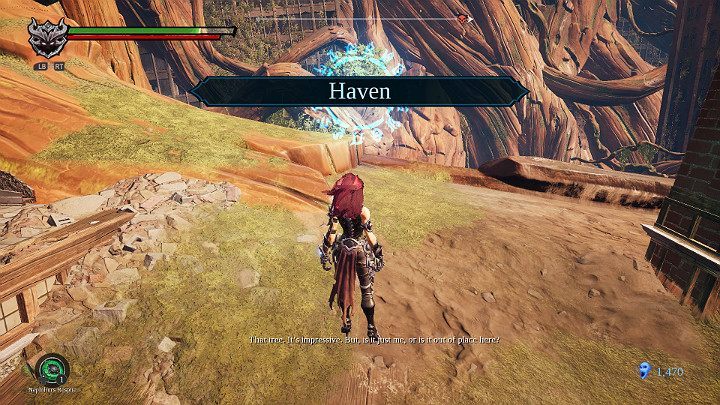 The Haven is the second location in which you will find a large tree growing in the very center of the city. Walk along the marked path. 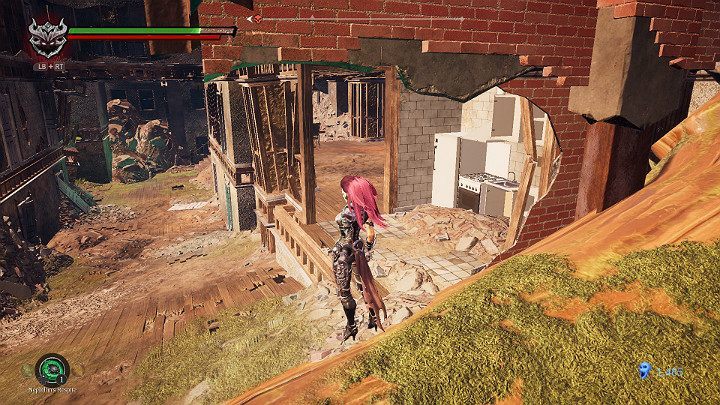 When you reach the ramp that leads upwards, look towards the ruined kitchen. In the door frame there will be a piece of furniture rolled over, which you can destroy to get inside. In the room there will be one opponent hiding behind the bookcase. Inside you will find a Lurcher Cluster. 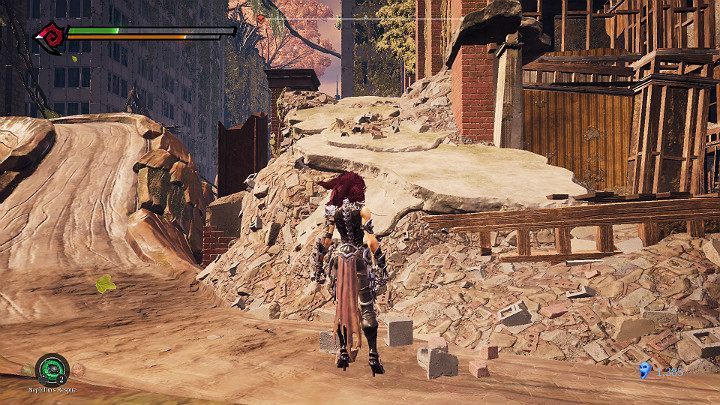 When you return to the main path, look to the right. Using the ramp shown in the picture above, you can get to the balcony leading to a dead end. Along the way you'll have to defeat several enemies, but at the very end you'll find one splinter. 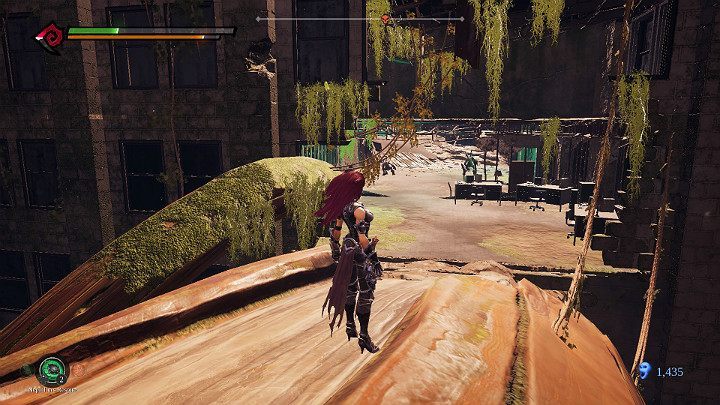 There are more opponents ahead of you. After defeating them, make sure that you have smashed the office furniture on the right side because you will find one shard there. 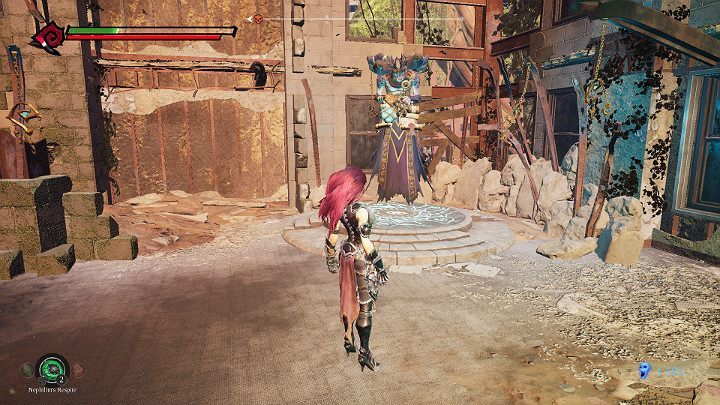 Further road will lead you to Vulgrim. In exchange for souls, Vulgrim offers his services, the possibility of teleportation and buying/selling items, such as healing debris. For souls you can develop your character. For more information on character development, please refer to the relevant chapter of this guide. 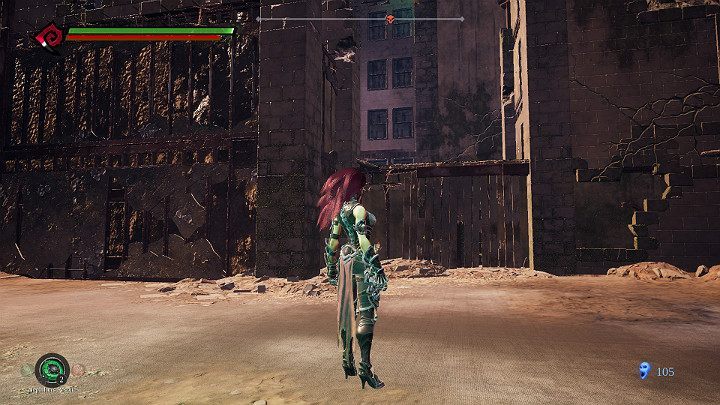 When you have completed all the tasks with Vulgrim, jump on the elevation shown in the picture above. 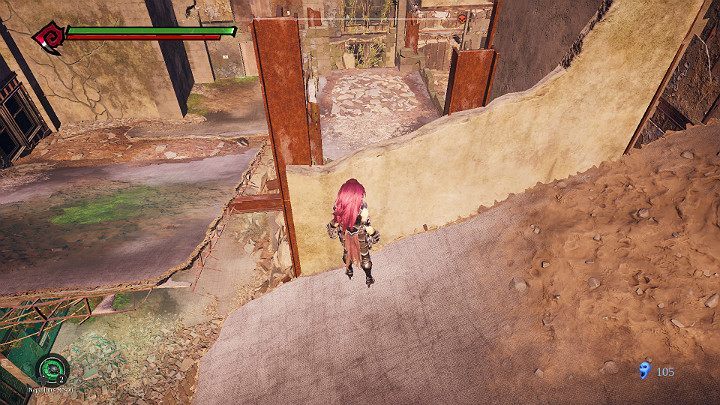 When climbing up, pay attention to the wall shown in the picture above. You can jump over it and at the bottom you will find a Lurcher Cluster. 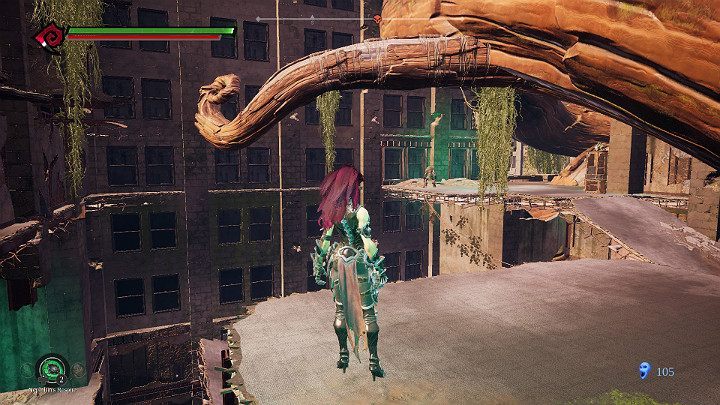 You will get to the shelf visible a bit further using a simple trick with a weapon. Jump up, grab the branch with your weapon and jump to the other side. Be ready to fight right away because you can count on the Welcome Committee. 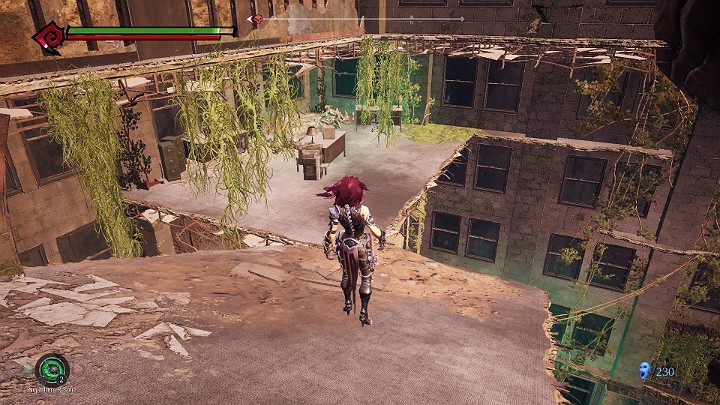 When you deal with enemies, go down a little bit lower. You'll find one opponent here and you'll get another Lurcher Cluster. 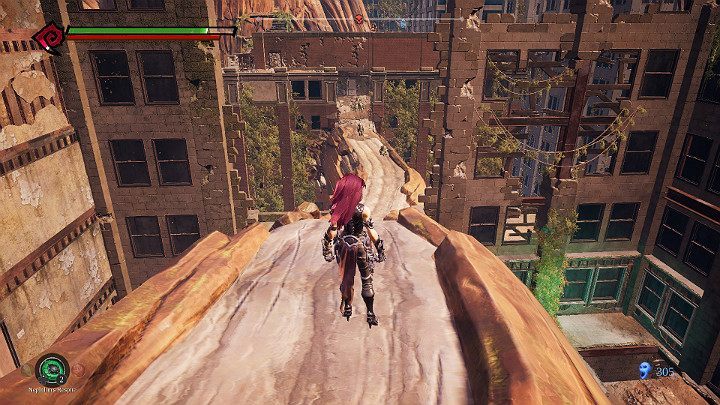 Walking along the path, you'll come across more enemies. But before you fight, you need to know that in addition to the 3 visible creatures in the distance, suddenly there will be two more. You don't have too much room to fight, so - if necessary - dodge backwards so you don't fall into the chasm. 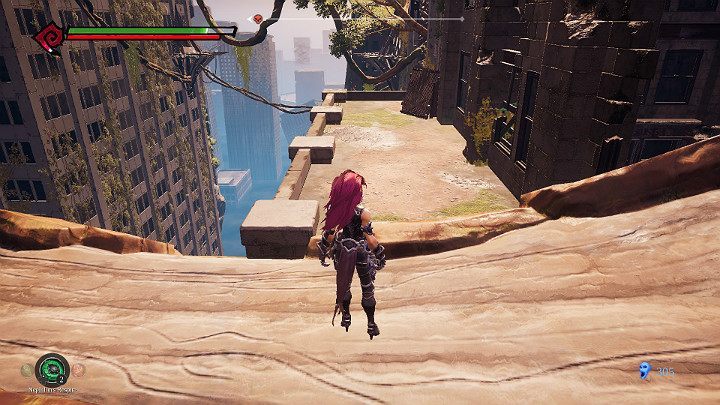 After defeating your opponents turn right and jump on the balcony shown in the picture above. Behind an obstacle made of planks there is an opponent who's just waiting for you to appear in range. Behind the corner you will find another Lurcher Cluster. 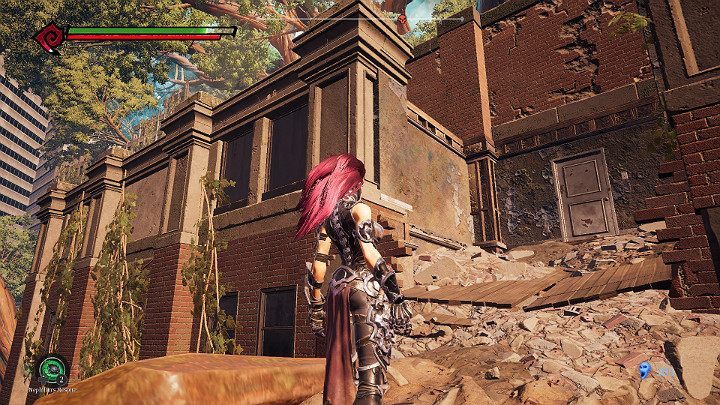 Return to the main path and climb up to the top level. To do this you will need to use the double jump on the wall on the left side. 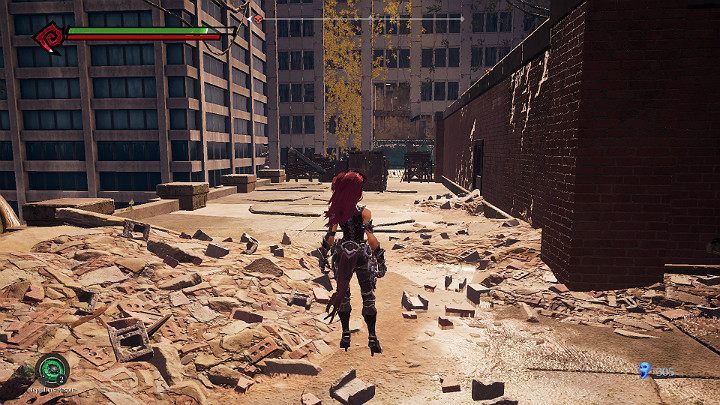 When you reach a higher level you will see some obstacles from the boards. Behind them are enemies. You also have to watch out for the canopy on the right side as there is a creature with knives lurking at the top, which will immediately join the fight. 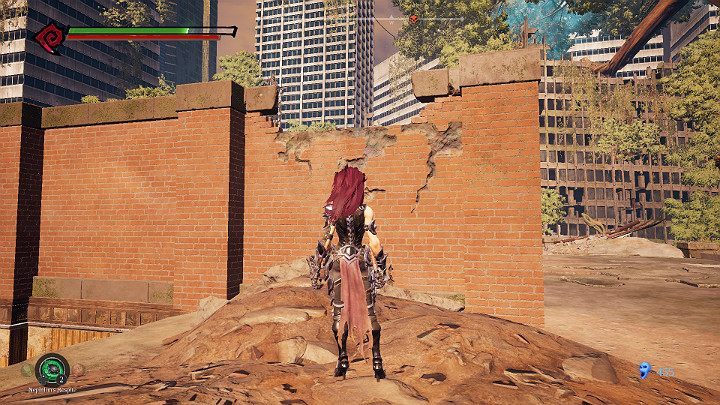 After defeating your opponents, jump on the canopy. You will find the right place right around the corner. 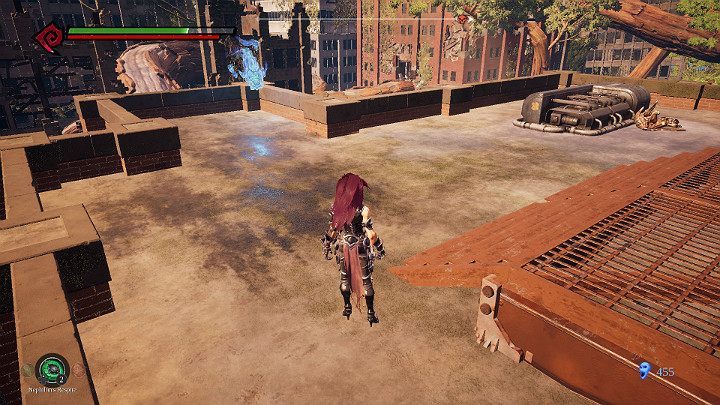 When you are on the roof of a building, pay attention to a stray blue soul. You have to attack it to collect it. On the right side you can also see the body of the creature, with the next Lurcher Cluster. 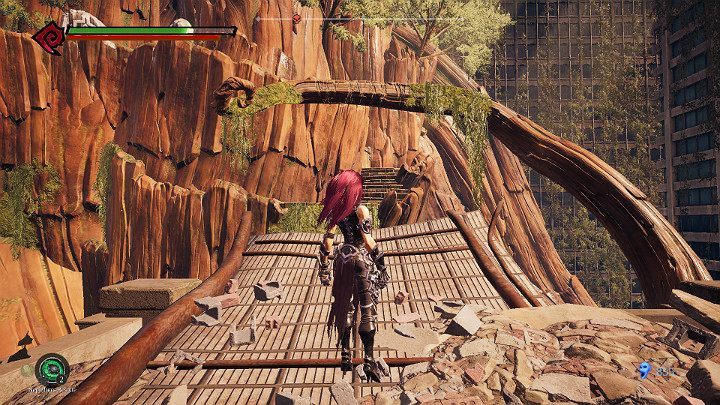 Return to the main path and jump to the other end of the chasm. Then continue climbing the stairs. 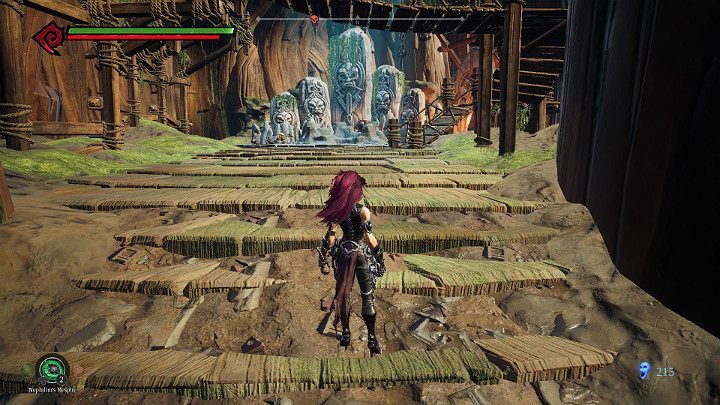 You will reach the heart of the Haven, where you will meet the Ulthan. After a short cut-scene, you will be able to continue your adventure. From a conversation with the new ally, you will learn that you must go to the location of the Afterlife in order to defeat the next Divine - Anger.

Moreover, you can talk to Ulthane to open the purchase window for weapons and upgrades. If you have a problem with that, then wait until Ulthane stops working and turns to the main character. Only then does the conversation icon appear. 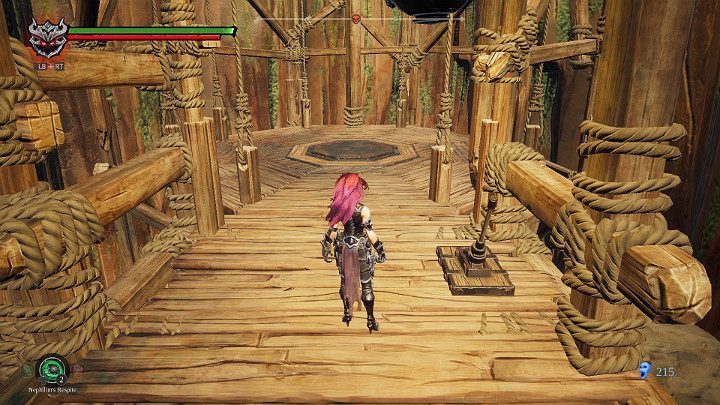 Go to the central point to start the elevator. This way you will get to the next location. 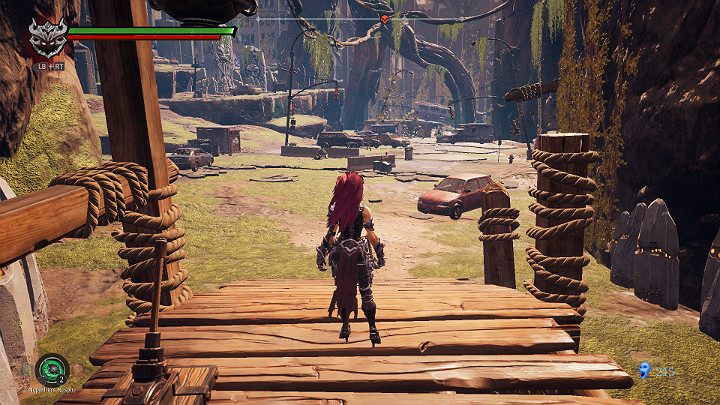 The location you will find yourself in is not one of the safest, so you will have a lot of fighting ahead of you. But before you proceed with eliminating enemies, make sure you collect the Angel Artifact, which you will find near the corpse of the monster at the low wall. 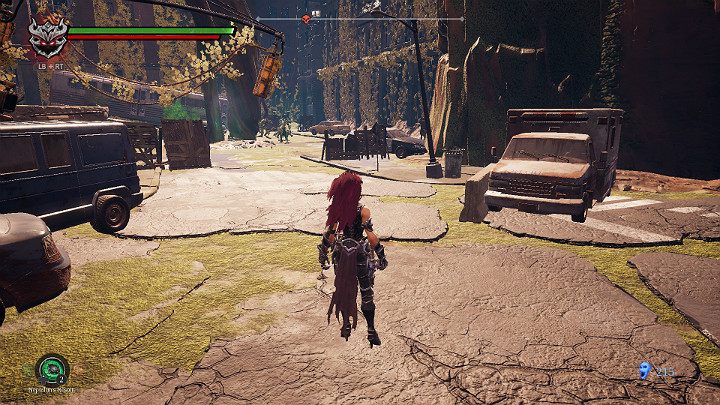 First, try to eliminate the 3-monsters patrol. They will follow a marked path, so just wait until they come to you to start fighting with as few enemies as possible. 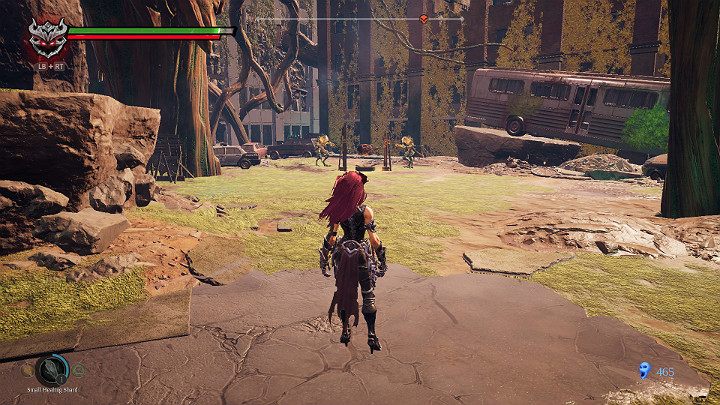 Then finish off two enemies feasting by the fire. On the right side, right next to the bus, you will find a fragment. By going a little further, at the corner of the building on the right, behind a small barricade, you will find the Lurcher Cluster. 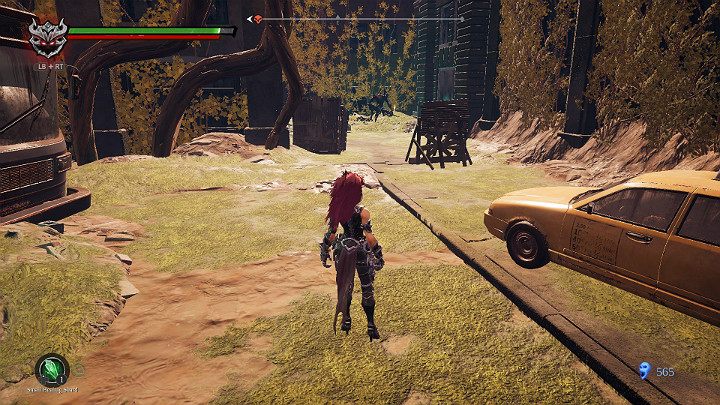 On the other side of the bus there is a passage to an alley, and in it a stronger opponent awaits. Try to pull your opponent out of the alley to have more room to avoid his blows. From the body of a defeated opponent, you will get Adamantine ore, which is useful for strengthening weapons. In the corner of the alley, you will also find Lurcher Cluster. 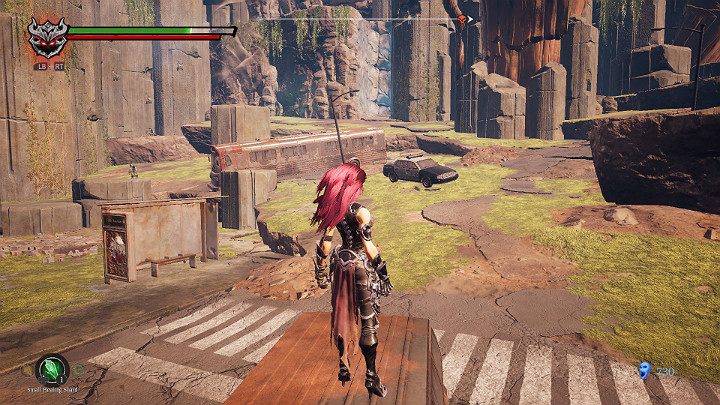 Return to the beginning of the location and this time go left. Note that there are enemies on the left side that will attack you immediately when you are nearby. Also, pay special attention to enemies hanging on the wall. After they have been eliminated you will be able to collect a fragment. 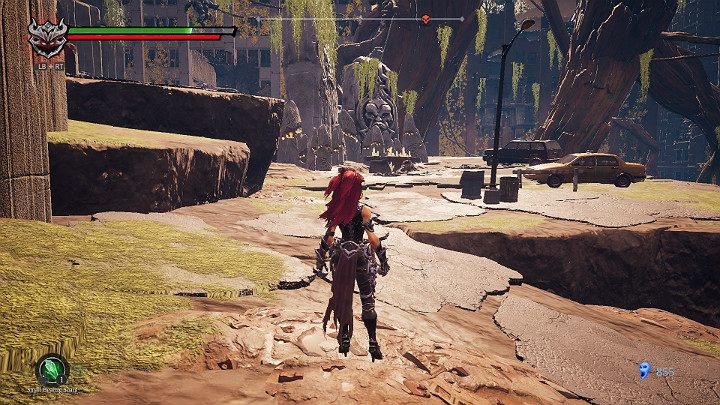 At the altar visible in the distance you will come across 2 enemies. They should not pose any danger. From the altar, you will be able to collect another fragment of Adamantine. 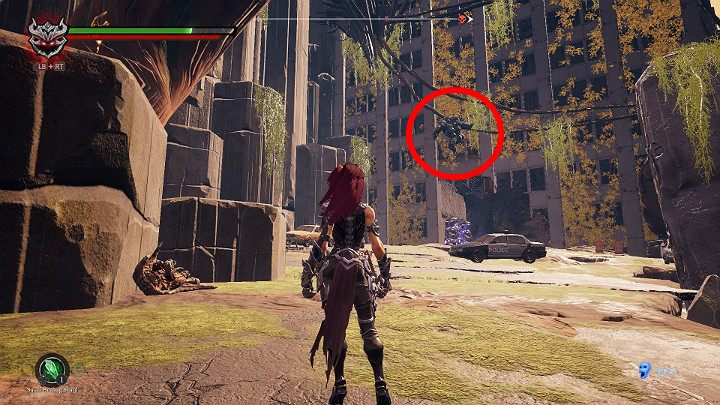 Going a little further, pay special attention to your opponent hanging on the rope. He will fall on you as soon as you are nearby. Before you start the fight, you can collect Lurcher Cluster, which is located on the rock on the left side. After the fight is over, collect the Adamantine fragment. 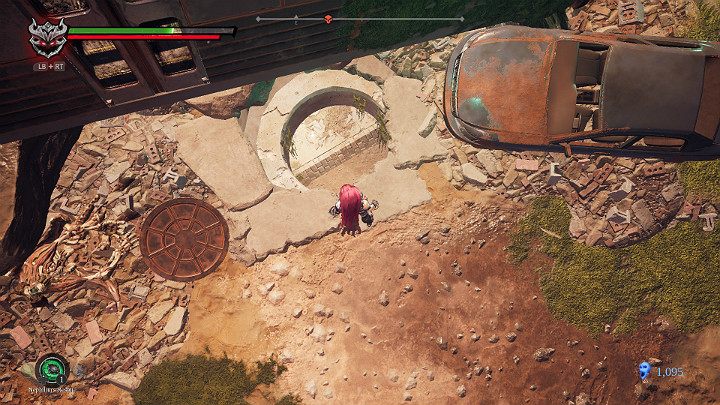 After eliminating the last opponent, return to the bus and look down. You will see the entrance to the sewers. Jump down to continue your adventure. 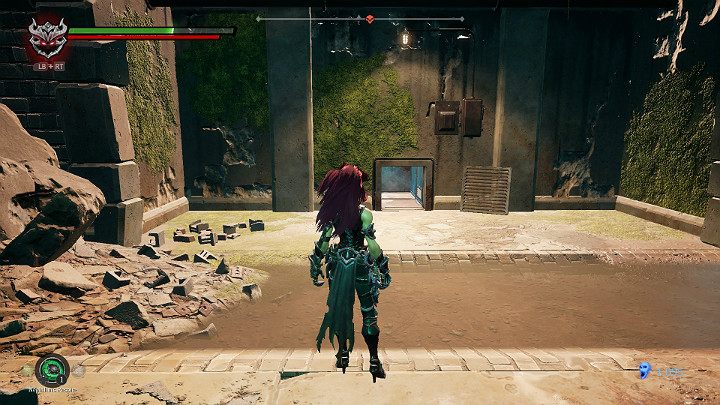 Continue your journey with a narrow passage in the wall. You will get to the next location.