The Miller is the first new boss in Darkest Dungeon introduced in The Color of Madness DLC. You come across this enemy during one of the first few missions on the Farmstead. After that you can encounter him during Endless Harvest mission that takes place in the same location. 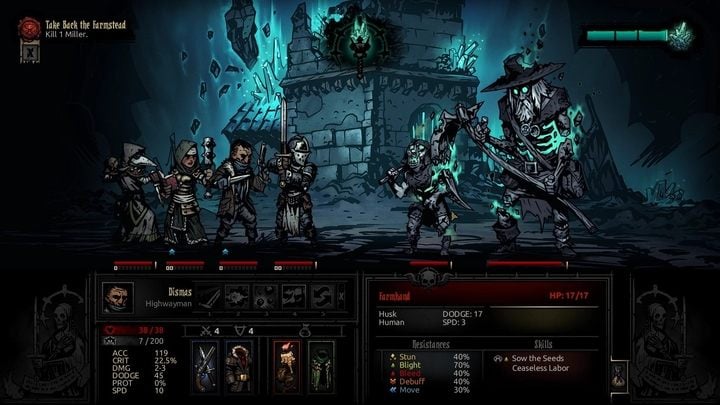 The Miller is the first boss that you will encounter in the Farmstead.

Statistics and resistances of the boss

As you can see, this boss is practically immune to Bleed effect. Instead, you should focus on inflicting Blight - the boss has a small resistance to that effect.

How to defeat this boss

The Miller is the first more challenging enemy that you will encounter here. Just like other bosses in the game, The Miller requires a certain approach in order to defeat him. In most cases The Miller will summon one of the "regular" Farmstead enemies every turn. After that he can do one of the two things - use an Area of Effect attack that deals damage to all heroes in the party or he can use a Buff to strengthen the summoned creature. Also, the boss and the summoned monster both get bonus to PROT and the boss himself is guarded by his summon - the role of this creature is to receive attacks aimed at the boss. When The Miller's health goes below 2/3 he can start to use an attack that can deal massive damage to a single target (about 15 Damage). This attack also restores The Miller's health by 20 points. 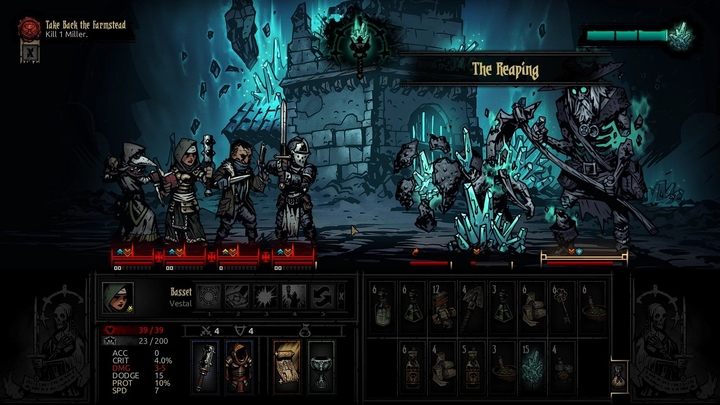 The Reaping is the most dangerous attack - it deals damage to the entire party.

The best solution to win this fight is to have one hero who can deal a lot of damage - such as a Highwayman, a Hellion or a well-equipped Crusader or a Leper - and use this character to eliminate summoned creatures. One attack should be enough to eliminate them before The Miller strengthens that enemy. You should also have a hero who can attack the first and the second position at the same time, like the aforementioned Leper or Crusader - thanks to this you will be able to damage both the summoned monster and the boss. Blight works great on The Miller - he has a small resistance to this effect and he moves twice per turn.

Don't forget about healing during this fight. The best character for this role is Vestal - in most cases, the boss will damage everyone. This means that her AoE healing will work great here. You can also invest in Trinkets that increase Dodge - the boss' AoE attack isn't that accurate. A hero can easily avoid it if they have more than 35-40 DODGE points. Don't worry about Stress - the fight with The Miller is intense and it lasts only a few turns (it is either him or your party). This means that your party won't accumulate a lot of Stress. 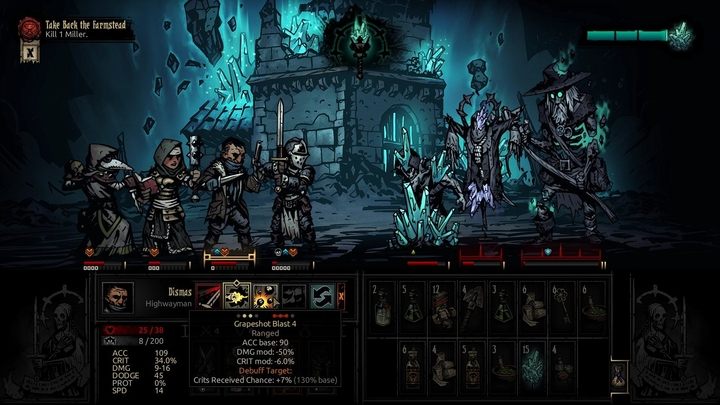 The starting party - a Crusader, a Highwayman, a Vestal and a Plague Doctor - will do greatly against The Miller.

The recommended party for this fight is the one that can quickly eliminate summoned creatures, hurt the boss and, at the same time, replenish health points lost due to The Miller's AoE attack. You can use the following party lineup:

Of course, you can change this lineup however you want but this one is the most optimal. It should also be mentioned that these heroes are available since the week 1 - you won't have any problems with making a party like this one.