The guide was updated with chapters about The Crimson Court expansion and The Color of Madness expansion.

This unofficial guide to Darkest Dungeon is perfect for those who are willing to discover the deepest secrets of the gloomy dungeons which spread under the ancient and hostile mansion. This mansion used to belong to a family of a name which is so sinister and primeval that it had been forgotten by the time and consumed by the evil forces.

The first chapters of this guide are covering the basics of the mechanics which rule the world of the DD. From them you will be able to obtain the basic knowledge which will help you to survive in this hostile world. You will know how to keep your heroes alive (heroes' health bar), you will see how fragile their minds are (stress mechanics) and you will be able to understand special effects that will influence your heroes sooner or later (status effects).

The second chapter of the guide focuses on the heroes' classes. There, you will find the descriptions of all the classes in the DD, along with their special abilities, flaws and merits. Additionally there are some special tips which will help you to prolong the lives of the heroes. The next chapter, which is also a bit shorter, depicts all the in-game beasts, rogues, demons, spawns and every other creature which can be encountered by your heroes. There are also detailed tips and tactics concerning the fighting with the elite bosses which command these deadly hordes.

The Color of Madness DLC Guide

We have updated our Darkest Dungeon Game Guide with The Color of Madness DLC expansion set. In the new guide, you will find information about mercenaries, recommended consumables for expeditions to new dungeons, a lot of starting tips and descriptions of new, dangerous opponents. You will also learn how to deal with stress in The Color of Madness DLC. Don't forget to check our walkthrough for all DLC missions.

Last two chapters are focusing on the crucial locations; The Town and the Dungeons. The Town's description focuses on its hot spots and their enhancements.

The latter chapter is a bit longer. It consists of every piece of information that a hero needs to have at least the smallest chance to survive and to go back to the Town in one piece. This data is e.g. the description of the in-game missions, the dungeon exploration process, the fighting and the healing system.

The Darkest Dungeon is a debut of the Red Hook Studios. It tells the story of a mansion which was once conquered by the primeval and evil forces. As the last living member of the family, which still bears the law for the ruins, you will have to discover the secret, hidden in the dungeons, thus releasing the mansion from the fiendish spells. The gameplay is based on the management of the daredevils who consider themselves brave enough to enter this forgotten land. You will have to send them on the missions where they will be fighting for treasures. They will be also trying to keep their minds sane. The retrieved gold you will have to spend on the expansion of your Town, which will unravel another sets of missions and enemies.

The Guide for the Darkest Dungeon consist of:

The Color of Madness 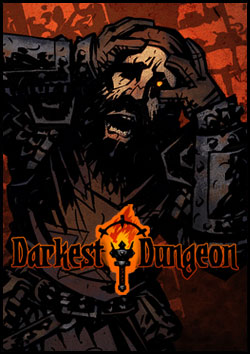 Darkest Dungeon is a turn-based, cRPG game, in a dark fantasy setting. The action takes place in a grim fantasy world, with its technological level similar to that of the Middle Ages. The campaign mostly takes place in the ruins of an abandoned fortress and the enormous dungeons underneath it.

In Darkest Dungeon you will spend most of your time exploring the endless corridors of the ruins, however, the quests themselves are constructed differently to those you would find in your ordinary RPG. The key to success in Darkest Dungeon is not the equipment of your adventurers but their emotional state. The members of your team are not stout-hearted heroes and the horrors you will encounter during your journeys will have a great influence on how they feel and behave, forcing great stress on them and sometimes changing their character.

The combat in Darkest Dungeon features a turn based system. The formation and placement of your heroes is the key and you have to think carefully about your every move, if one of your team dies his death is permanent and you will never have a chance of getting him back. Monsters aren’t the only danger you will face on your road, traps could also prove dangerous just like internal conflicts within your party and darkness, the torches you carry burn out over time and spending too much time in darkness inflicts more stress on the members of your quest.

The riches you gather can be used to renovate the town, which opens new parts of it, allowing you more options of stress relief and upgrading your heroes.