Battles in the Farmstead from The Color of Madness DLC are unique - besides new enemies, available only in this area, you can also come across enemies from every region - both regular enemies and bosses. Because of that it is hard to determine which enemies you should worry about since you can come across any of them.

You can stick to the rule from the other regions and keep an eye on enemies who inflict Stress - usually, they are placed in the 3rd and 4th place in the row (also, you are probably familiar with them). Stress is much more dangerous than losing health points which means that these enemies should be eliminated first. 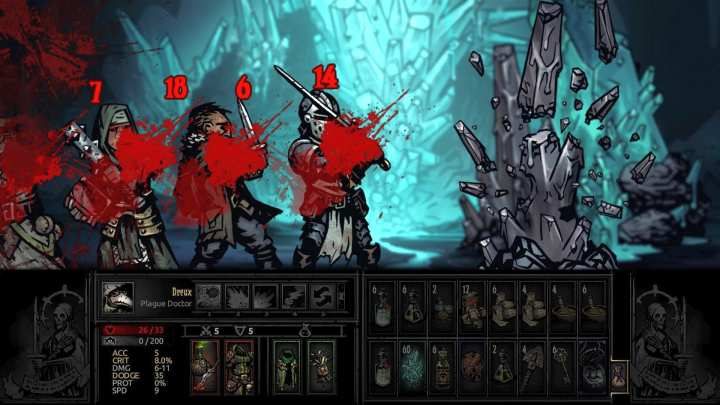 The exploding crystals are the biggest threat here - they deal massive damage.

The crystals, unique to this place, are the most dangerous here. They are created from enemy corpses (if you don't destroy them before the end of a turn) but also thanks to certain enemy attacks. They don't attack you, however, they grow larger with each turn (through regenerating). These crystals explode after a few turns - this explosion deals massive damage and inflicts Stress on the entire party. Destroy them first - a hero who shatters it receives a little of their health back.