Garden Guardian is an optional boss introduced in the Crimson Court DLC and fought in the Courtyard. You can encounter him after completing the main storyline - defeating three major bosses (Baron, Viscount and Countess). Once you complete it, a new objective - always called "Defeat the Fallen Guardian" - will appear in the Courtyard. The mission can be repeated unlimited amount of times, doesn't require an invitation and each time requires you to defeat the Garden Guardian. Defeating him will reward you with two of the set trinkets you still haven't collected, making "farming" him the best method to acquire all of them. The dungeon you fight him in is just like the ones you've cleared in the previous area - you need to go to the farthest room to find the boss. 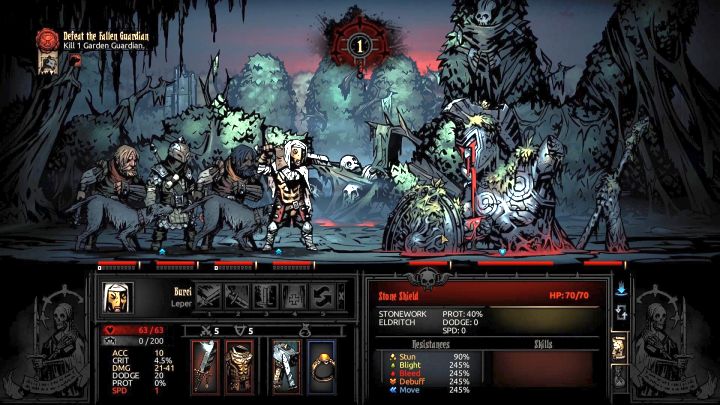 Keep in mind that you can't leave the Courtyard like you did with the previous missions and re-enter it with a new party. Once you do this, the mission will be failed, your party will receive a stress penalty and another party will start inside a new dungeon.

The following table presents the boss' stats during each encounter. The table shows all three parts of the boss. The enemy doesn't have three different variants (like, for instance, Crocodilian) - you will encounter him only once.

Note - the "main" part of the boss, Garden Guardian, won't move unless you destroy the Stone Shield. Blood Fount and Stone Shield can move once a round.

Once the encounter starts, you will notice three different targets - Garden Guardian, Blood Fount and Stone Shield. You only need to defeat one of them (Garden Guardian) to finish the battle, but you need to deal with all of them during it. They behave different as the battle progresses:

There is dangerous connection between the Stone Shield and the Garden Guardian. Normally the guardian won't do anything, but once you destroy the shield it will awake and will start using two attacks. One of them will buff its accuracy, damage and critical chance and the other will allow the guardian to attack your entire party. Each round the boss will buff himself again and deal more damage - after two-three rounds your entire party will either be dead or low on health. This is why you SHOULDN'T destroy the shield at all - you can disable the protection mark with different methods.

As you probably saw in the above table, all three enemies are basically immune to all status effects. The only exception is the Stun resistance of the Stone Shield - 90% should allow you to easily stun it with most characters. Once stunned, the shield will stop protecting the Garden Guardian, allowing you to attack it without fear of destroying the shield. Additionally, once the shield uses Skyward Shield to ascent above the battlefield, the protection will also be disabled. The whole encounter should be either about stunning the shield and attacking the Stone Guardian, waiting for the shield to ascent and then attacking the guardian, or by using both methods simultaneously. What's more, if you can't stand the damage and Bleed of the Blood Fount, you can take it out - destroying it won't wake the Garden Guardian.

Your task here is to focus all of your attention on the Garden Guardian. As it's normally protected, you need to either wait for the Stone Shield to ascend above the battlefield to attack the guardian, or stun it to break the protection on the main target. Once that's done, launch all attacks on the boss, marking it before for extra damage.

The best team composition for this encounter is one that can make use of Marking and occasionally stun the Stone Shield. This will allow you to significantly increase the damage output of your party and disable the protection of the Stone Shield, allowing you to directly target the Garden Guardian. Heroes capable of applying Bleed and Blight are useless here, as the enemies are immune to those effects. Bringing one pure damage hero is not a bad idea either - you can equip the Sculptor's Tools to negate the 35% PROT of the enemy.

As far as the trinkets go, you should use those that boost the damage and critical chances of the heroes. Class-restricted trinkets that increase damage against Marked targets are also extremely effective here. Additionally, you can equip Sculptor's Tools to one of your heroes - this will increase the damage against any of the targets by 40%!

There are several heroes that shouldn't be used here, such as: