A new area introduced to the game with the Crimson Court DLC. Unlike the other areas, the layout of the Courtyard is hidden at the beginning. Once you reach the "end" of the route, a scouting mechanic will kick in, revealing up to three new routes. What's more, the courtyard is huge - there are dozens of rooms, connected with long corridors flooded with various enemies and curios. According to the developers, the area is not meant to be explored in one go - players can freely leave the area (without suffering stress damage) and reenter it later. When entering it again, the area you've previously explored will still be cleared, allowing you to continue from where you've left.

Increasing Infestation and entering the courtyard 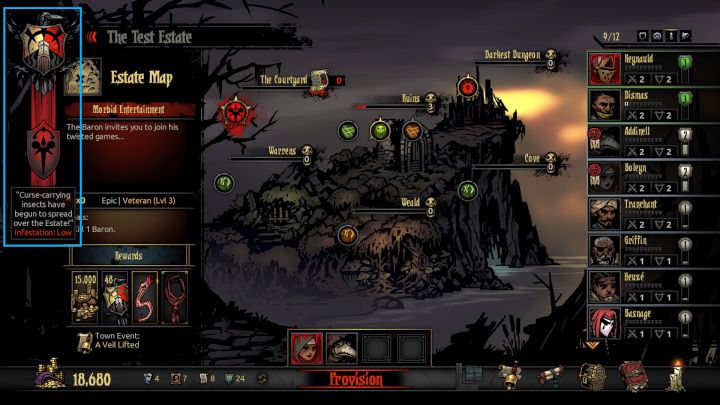 The level of the Infestation can be checked in the upper left corner of the screen.

Entering the area is a little tricky. The first time a player The player can first enter the Courtyard after 3 weeks have passed - a simple quest, requiring you to destroy 3 nests, will appear there. Once you've done it, you won't be able to enter the courtyard until you've received an invitation to do so.

The invitation to enter the courtyard is dropped by one of the foes - Gatekeeper. Unfortunately, you won't be able to meet them that easily. First, you need to increase the Infestation level of the estate. The infestation level can be checked on the embark map (where you select dungeons to go to ), represented by a bar in the upper left corner of the screen. There are three stages of the Infestation:

About 15 weeks have to pass for the infestation to reach High level. Afterwards, you will have a small chance of encountering Gatekeeper enemies in non-courtyard areas. Once defeated, they will drop an invitation, allowing you to enter the Courtyard once. You can acquire multiple of those invitations before entering the area and each one allows you to enter it once - if you leave the courtyard, you will need to use another invitation to enter it again.

Characteristics of the Courtyard area

The main characteristics of the Courtyard area are as follows: