The Viscount is the second of the three main bosses encountered in the Courtyard. You will be fighting him during the third mission of the area, "Served Cold". As with the previous one (Baron), you will first need to get to the boss before you can fight him. The area of the third mission is divided into dozens of rooms, filled with numerous enemies, traps and Curios. Like with the previous mission, you need to find specific keys in order to open locked passages and continue towards the boss. Fortunately, the dungeon layout is fixed - it's always the same (like in the Darkest Dungeon area). This guide will include complete maps of each Courtyard area - if you have any problems navigating through them, check those chapters. 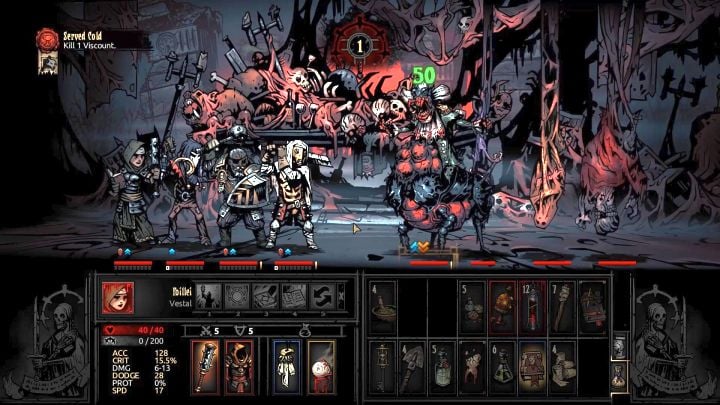 The second of the three bosses of the DLC - the Viscount.

Keep in mind that you can always leave the Courtyard area and re-enter it with a fresh party, with a better composition that will be more effective against the boss. There's no point in entering the boss area when most of your characters lost 2/3 of their health and are almost afflicted.

The following table presents the boss' stats during the third mission in the Courtyard, "Served Cold". The boss doesn't have three different variants (like, for instance, Crocodilian) - you will encounter him only once.

Note - the boss has 4 moves each round.

Once the battle begins, the boss will enter the area, accompanied by three "allies" - Emanciated Body, Body and Bloodstuffed Body. Those bodies can't move and won't be a direct threat to your party - they are "only" used for the boss to heal and buff/debuff himself, depending on the target of his attack. The boss will use an ability on one of those during each round (using one of his moves - two for Revenous Feast). Three attacks are associated with those bodies:

Aside from those, the boss will use four different attacks - Hungry Eyes, Riposte Attack (a buff gained after using Hungry Eyes), Refined Pairing and Served Rare. All of the abilities can cause stress damage and are quite powerful. However, they have extremely low accuracy (ranging from 97,5% to 102,5), making dodge parties very effective against the Baron. Using dodge trinkets and two Man-at-Arms' Bolster abilities, or two Hound Masters' Guard Dog abilities will allow you to reach 100 DODGE (even over 100 with the Hound Masters), making all of the Baron's attack useless - he will have about 5% chance to hit (5% is the minimum hit chance, regardless of DODGE / ACC values). Even the two buffs of the boss won't change much - he will still miss most of his shots. The remaining two heroes can be the ones that focus heavily on dealing damage - Flagellant, Hellion, Lepper, Abomination are the best for the role.

The thing to watch out for when dealing with the boss is his ability to heal himself - especially when doing so with the help of Ravenous Feast. The boss will each time restore 10/25/50 health points, boosting his stats at the same time. You have two possibilities here - you can either take out all three of the bodies or bring a damage-oriented party and try to take the boss down with force, negating his healing. The first approach is easier to accomplish - you just need to eliminate the bodies one by one. They have low health pools and lack any dodge or protection. Lepper will be particularly good here - he can target ranks 1 and 2 simultaneously, dealing huge damage, and his main weakness, low accuracy, won't be a problem thanks to 0 dodge of the bodies. Keep in mind that the bodies don't move - applying any damage over time effects (Bleed and/or Blight) won't damage them at all.

Once you take out the bodies, the boss won't be able to heal and boost his stats, making the entire encounter trivial - you should be able to take him down in 2-3 rounds.

Depending on your approach - heavy damage or dodge-oriented party - there are different party composition that can be used to combat the enemy. You should, however, target the main weaknesses of the boss - no protection (0%), rather low dodge (23%) and low accuracy. The boss has quite low Bleed and Blight resistances (70% and 95%) and those effects can be easily applied and deadly (given his 4 moves during the same round), but his support abilities (Miserly Morsel, Squeal Meal and Ravenous Feast) cure him of any Bleed and Blight status effects. If you want to deal damage with the help of those effects, you must use an extremely slow party - the boss starts his turn with one of the healing effects, curing himself of DoTs. Applying any Bleed and/or Blight before the boss can move is pointless - he will take one tick of the enemy and cure himself of the effect. Your party needs to move after the first attack of the enemy.

As you can imagine, the above scenario is extremely hard (if not impossible) to pull off. This is why you shouldn't really rely on those effects - if you still want to, try to apply them to one of the bodies, so that the boss can transfer the effects on himself. In this chapter we will discuss a party focused around dodging and dealing huge damage.

This is the easiest and most effective party to use against the Viscount. Both Man-at-Arms need to focus on using Bolster every single round, severely decreasing the boss' chances to hit your party. Heroes in rank 1 and 2 should focus on taking out the bodies first - they won't be powerful enough to take out the boss, as he will outheal them. As far as the trinkets go, you should use the ones that give 8-15 points of dodge on every hero. However, if you want to be sure that Lepper hits his targets, you can equip him with the accuracy trinkets. He will still have 70-80 points of dodge, allowing him to dodge most enemy attacks and he is sturdy enough to take some of the hits. With a dodge party like this you don't need a healer in the party - about 90% of enemy attacks will miss their target.

However, you can use different party compositions if you want. Those are (from 1st to 4th rank):