The Fanatic is one of the three (together with Shambler and Collector) wandering bosses - he doesn't have a fixed location where you can meet him. Instead, he will constantly hunt your party if there are at least 2 characters infected with the Crimson Curse. This works only when entering the dungeon - your heroes might still get attract the disease during the mission, but won't spawn the enemy. The chances for the enemy to spawn are as follows: 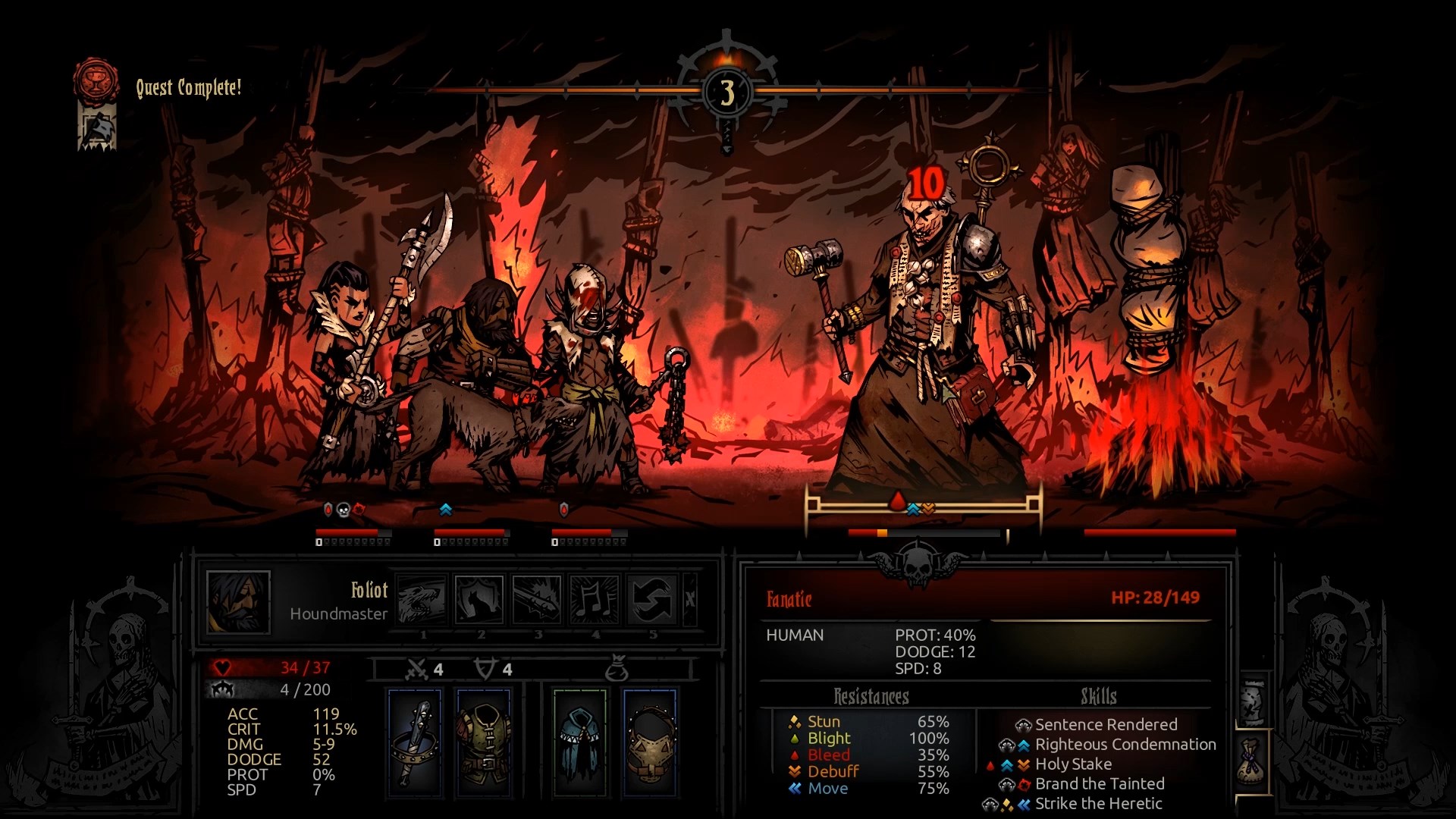 Ignore the hero on the Pyre and focus all your attention on the Fanatic.

This occurrence is signaled with a specific loading screen. If the loading screen changes to the angry face of the Fanatic it means that he will be lurking in the dungeon, waiting for your party. However, you might not stumble upon him - the enemy might be hiding in the last room and you won't even encounter him before completing the run. This feature also serves as a warning for the player - if your team is incapable of dealing with the boss, you should immediately leave the dungeon. If you run into the enemy and he will be too much for you, at least one of your characters is most likely to die. As with all of the wandering bosses (and most in the game in general), proper team composition and tactic is key to success.

The following table presents the boss's stats in his three difficulty variants (the enemy has the same name, regardless of the difficulty level).

Note - the boss has 3 moves each round.

* - the enemy seems to spawn only in Veteran and Champion level dungeons, although it might be a bug.

The main problem with team composition here is the fact that you won't really know that you're going to fight the Fanatic - he might appear in the dungeon, but it's never certain (unless you have 4 cursed heroes). You can, however, "force" the encounter on your own. In order to do that, you need to have at least 2 heroes with the Crimson Curse and have then enter Veteran or Champion level dungeons - the length doesn't matter. If the enemy didn't spawn (you didn't get his face as a loading screen) either finish the dungeon normally or leave it (your characters will gain 20 points of stress). Repeat the process several times and the enemy should finally appear.

The whole encounter is very similar to the one with Hag. The enemy starts in ranks 3-4 and his Pyre is in 1-2. The fight starts with the enemy using Sentence Rendered ability. It allows him to throw one of your characters onto the Pyre. If that happens, your character will receive 3 / 6 / 9% MAX HP damage each move, depending on the difficulty of the dungeon. Keep in mind, however, that heroes with the Crimson Curse will receive double the damage (6 / 12 / 18% MAX HP). The hero will be automatically dropped to 1st rank once he/she reaches Death's Door. There's no point in destroying the Pyre - as soon as you do that, the enemy will use the ability again and throw someone else on it. The attack can be dodged with high enough DODGE stat, but you shouldn't really count on that - even characters with over 50 DODGE are often hit with it.

The same tactic as with the mentioned Hag applies here - you should bring heroes centered around dealing damage and focus all your attention on the Fanatic, ignoring the Pyre. The enemy moves three times each round, which is why using Stuns and marks is ineffective - the stun won't change much and the mark will go away before you can even use it. You also shouldn't rely on Blight, as the enemy has quite a resistance to it. You should, however, use Bleed attacks - they are quite easy to land and will deal immense damage thanks to the three moves that the hero will perform each round.

Note - the enemy can appear both in corridors and rooms. At the beginning of the fight your team will be shuffled randomly.

You should, on the other hand, avoid using heroes that:

As for the trinkets that should be used, focus on the one increasing the chances to apply Bleed (for Flagellant and Hellion) and those that increase DODGE - the higher the latter, the lesser the chance that the enemy will throw one of your heroes onto the Pyre. There's no point in increasing the SPD and HP stats here, as well as the PROT - the main damage comes from the Pyre, not the Fanatic itself.

Note - running away from the encounter while one of your characters is on the Pyre will result in their death and loss of the trinkets they were using.