Crocodilian isn't really a boss - this foe is more of a mini-boss, especially given the fact that you will be fighting with him numerous times. He is, however, the first major enemy you will encounter after getting into the new Courtyard area - the reptile is fought during the very first mission, "Burn the Hives". As always, proper preparations and party member selection is crucial here - by picking the wrong heroes you can easily lose the whole encounter. 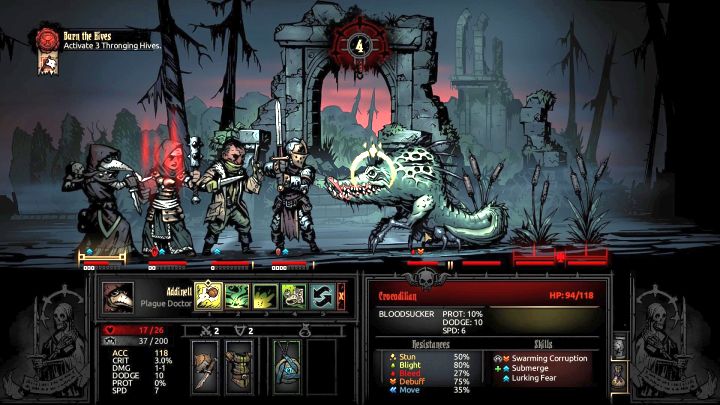 Even the starting party can take out Crocodilian quite effectively.

The encounter starts with the Crocodilian in the 4th position, while 1-2-3 are occupied by "enemies" of the "VEGETATION" type. Those are basically immovable and invulnerable obstacles - you won't be able to hit them thanks to their huge dodge and all of the status effects are useless because of their immense resistances. Their role is to limit your access to the boss - the foe will be moving around the whole battlefield with its attacks, swapping positions between every rank. This is precisely why you should bring a party that can hit every enemy position - or at least have some heroes capable of the task. However, the foe can still be defeated by almost any party (although it will take more time and you will risk losing one of your heroes) - even the starting one, Crusader, Highwayman, Vestal and Plague Doctor can take the "croc" quite effectively.

The enemy uses 5 different attacks. Submerge and Lurking Fear are his support/defensive abilities - the former gives him a boost to DODGE and restores health, whereas the latter increases its DMG, PROT and moves him forward. Teeth Rake is an attack that deals moderate damage and stress damage and has a chance to cause Bleed and pull the character forward. Swarming Corruption is an AoE (area of effect) ability that can hit all 4 of your heroes for small regular and stress damage, as well as cause ACC penalty. The most dangerous, however, is Apex Predator. The enemy can only use it after Submerge and the attack itself deals high damage and can cause Bleed to up to three targets.

The following table presents the boss's stats in his three difficulty variants (the enemy has the same name, regardless of the difficulty level). Note that the contents might (and probably will) change as the game is constantly balanced.

Note - the boss has 2 moves each round.

As you've probably guessed from the information presented in the above table, the boss has three major weaknesses - quite low resistance to Bleed and Stun and extremely low resistance to Move. Weakness to Bleed, coupled with the fact that the boss moves twice each round, makes this DoT (damage over time) effect extremely effective against it. Stunning and forcing it to the front (with Bounty Hunter's skill Come Hilter or Plague Doctor's Disorienting Blast) will allow powerful characters that are capable of hitting the front ranks (Crusader and Lepper) to deal immense damage to it. This also applies to the new class, Flagellant - his two powerful Bleeds are capable of targeting 1st or 2nd rank only.

The team that will do well against this mini-boss consists of:

As you can see, the above party is the one that you start with (after completing the tutorial mission). This is a good party for those that go through the DLC content with a "fresh save", when the player lacks powerful trinkets and various characters. Plague Doctor should focus on using Disorienting Blast to stun and shuffle the enemy, Vestal should use Dazzling Light whenever possible (unless you need healing), Crusader and Highwayman should focus on dealing as much damage as possible.

However, if you have access to all of the character classes, you can use other party setups, such as (from 1st to 4th rank):

You should avoid using characters that rely heavily on marks, like the Arbalest and Bounty Hunter. The enemy can move twice a round - in most cases the mark will fade away before you can even make any use of it. Abomination is also not the best idea - he can't go on the mission with either Vestal, Flagellant or Crusader and the enemy has high resistance to Blight.