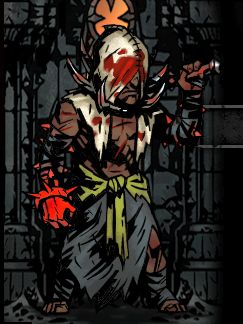 The Flagellant is a new character class introduced by the Crimson Court DLC. An interesting hero, equipped with multiple extremely powerful attacks and unique Death's Door and health-related passive abilities.

The Flagellant is mainly a damage dealer. However, it differs heavily from, for instance, the Grave Robber or the Jester, as he relies on the Bleed mechanic. Every single offensive ability of this hero deals moderate damage and applies heavy Bleed DoT. This makes him completely ineffective in the Ruins, where most of the enemies are basically immune to Bleed. However, this allows him to shine in other areas, especially in the one introduced by the Crimson Court DLC - the Courtyard. Enemies you stumble upon there are fast and deadly, but very susceptible to Bleed. Those attacks also make him very useful when dealing with bosses that move multiple times per turn - like the Hag, Shrieker and the Fanatic (introduced by the same DLC).

This hero class has multiple "hidden" abilities as well. The first one is called Rapturous. This is the name of the only affliction that the Flagallent can get once he reaches 100+ Stress. Rapturous gives him +25% Damage, +3% CRIT chance and -20 Dodge. This makes him even stronger as he gains stress damage. However, keep in mind that it still works as a regular affliction - he can attack random targets, other heroes, or even himself. This should be a mechanic you rely on - rather one that becomes useful in a pinch.

The second mechanic is associated with the health of the hero. Once he drops below 50% of his max HP, two of his most powerful abilities (Exsanguinate and Redeem) can be used in battle. Going below 38% health gives him +20% Damage and +3% CRIT Chance. When he reaches 0 HP and goes to the Death's Door, he gains buffs instead of penalties - +5 Accuracy, +20% Damage, +2 Speed and +20% Resist to Stun, Blight, Bleed and Debuff. Additionally, he will also heal all of the remaining party members by about 20% of their max HP. Given his extremely high Death Blow resist (73% - it can be further enhanced with items and one of his abilities), this mechanic can be abused to heal all other party members and give the Flagellant a huge boost to his offensive capabilities - dropping down to 0 health and 100+ stress increases his damage by 65% and his CRIT Chance by 9%! Additionally, when the Flagellant is killed, he heals all the remaining party members and stuns all the enemies on the battlefield.