The Crimson Curse is, quite literally, a vampirism mechanic introduced by the first DLC, the Crimson Court. It causes a hero to crave for blood, decreasing his stats and eventually leading to death if not given a certain item (The Blood). The mechanic is also connected with the newly introduced boss, The Fanatic. 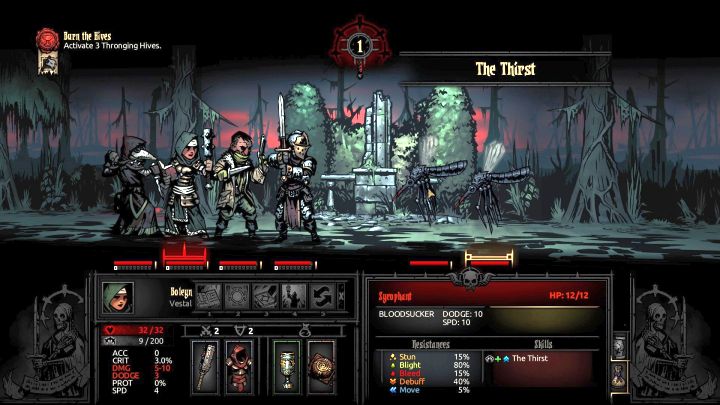 The attack that can inflict the curse.

The Crimson Curse is a new type of disease. It can be attracted from one of the enemies of the "BLOODSUCKER" type - new type of foes that you will, in most cases, meet in the new area of the game, the Crimson Courtyard (although they will rarely appear in other areas as well). The enemies will have access to an attack called "The Thirst". Primarily it deals low damage (3-5), healing the foe for twice the damage, but it also has a very small chance of inflicting the said curse on one of your heroes. Critical hits of the said ability have a higher chance of causing the disease.

There is no protection from the course - there are no items to prevent it from affecting a hero. Also, there is no limit to the amount of heroes that can have the Crimson Curse - you can start a dungeon with no hero suffering from it and end it with the whole party cursed.

The stages of the Crimson Curse 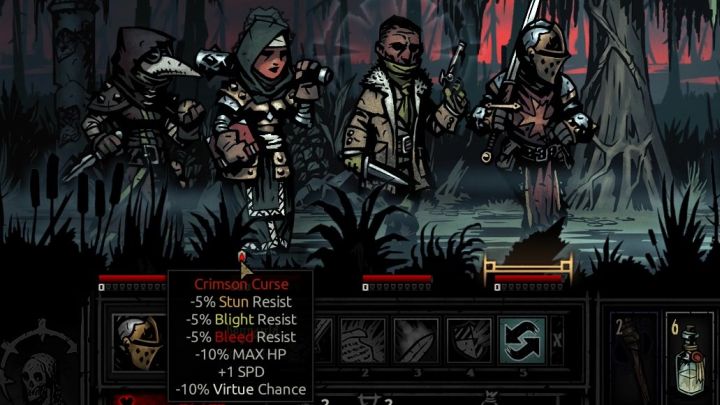 The basic stage of the curse.

There are 5 stages of the Crimson Curse. Those are: 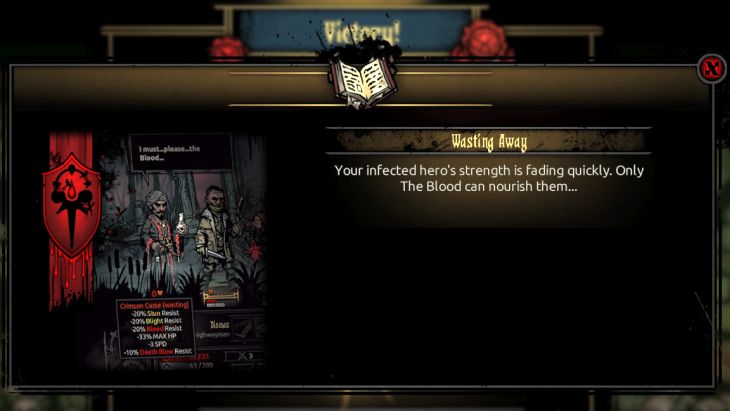 The effects of blood deprivation...

Note - your heroes can advance to "higher" stages during their stay in the city. They will automatically consume The Blood to prevent it from happening, but if you lack any, they will eventually succumb to the disease and die.

Effect of the curse - the Fanatic 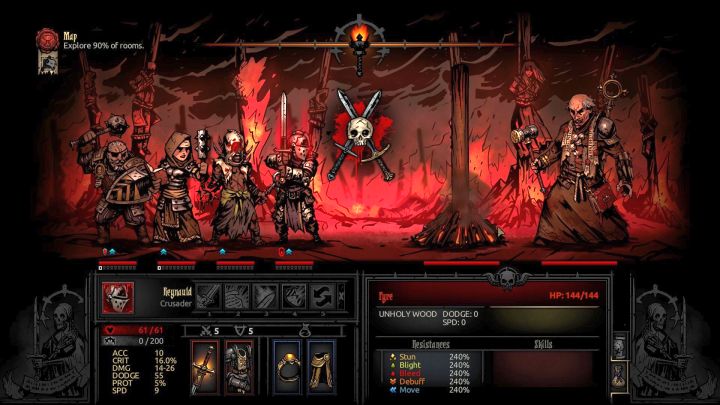 This is one of those encounters you don't want to experience.

The main aspect of the curse, aside from buffs / debuffs and the necessity to use The Blood, is the appearance of a new boss - the Fanatic. After about 20 weeks have passed since you've activated the DLC, you will receive a message that the Fanatic will hunt your party. There's only one condition - you must have cursed characters in the active roster.

When you enter a dungeon with a party that has cursed characters, there's a chance that the Fanatic will spawn there. If that happens, the loading screen will be replaced with the face of the new boss. Once your party enters the dungeon, the Fanatic will be waiting for them in one of the rooms. The room is selected randomly - he can appear in the second room, or even in the last one. In some cases you might not even run into him - if you've completed the objective, you can leave the dungeon and you won't have to fight the Fanatic.

Avoiding any contact with the foe is advised. The Fanatic has high health, resistances and can attack up to three times during a single turn. What's more, he will burn one of your heroes at a stake, dealing damage after each move of your heroes and his own. The damage from the stake is doubled when he grabs a cursed hero - even the toughest tanks can die in seconds. If it's possible, you should try to complete the objective and leave the dungeon without engaging him.

Note - the chances for the Fanatic to appear are increased by the amount of cursed characters you have in the party. What's more, he can only appear in Veteran and Champion dungeons.

Fortunately, after you've defeated all three of the mentioned bosses, the Sanitarium will gain a new function - it will now be able to remove the Crimson Curse from affected heroes. The treatment is relatively cheap (as with most of the diseases) and will require the hero to spend one week (a single mission) in the Sanitarium.