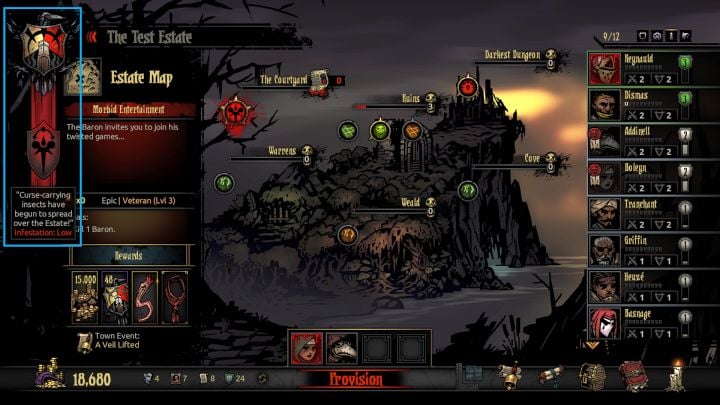 The level of the Infestation can be checked in the upper left corner of the embark screen.

The Courtyard area is a unique one. You can, in theory, enter it whenever you want to, but you first need to acquire special invitations - items that permit you to enter the area in order to fight with a specific boss. Each invitation allows you to enter the Courtyard area once. If you leave it, you will need to acquire additional invitations to re-enter it. This, however, has some merits as well - leaving the Courtyard won't reset the map. The layout of the dungeon is fixed and always looks the same and the party that re-enters it will start at the room the previous one left.

Invitations can be acquired from special enemies called Gatekeepers. They spawn randomly with other enemies and you can encounter them during any non-boss fight. However, they can't be encountered in the Courtyard area - you can stumble upon them in the Ruins, Cove, Warrens and Weald. Meeting them is, unfortunately, not that simple - you first need to increase the Infestation of the city to High. Infestation level can be checked from the "embark screen" (the screen you use to select a mission and party) - a bar showing the current level can be found in the upper left corner of the screen. The level of the Infestation can be increased by completing missions - you need several missions to increase the level from one to another.

The Infestation can have four different levels:

Once you reach High Infestation, Gatekeepers will start appearing in non-DLC dungeons. Each time you defeat a group of enemies with a Gatekeeper in it, you will receive one invitation to the Courtyard. This can be repeated multiple times to acquire multiple invitations. Once you defeat the boss of the Courtyard, the Infestation will drop back to None and you will need to increase it back to High and acquire new type of invitations (those are related to Baron, Viscount and Countess).

After defeating all three of the main bosses (Baron, Viscount and Countess), the Courtyard can be entered at any moment, without an invitation.