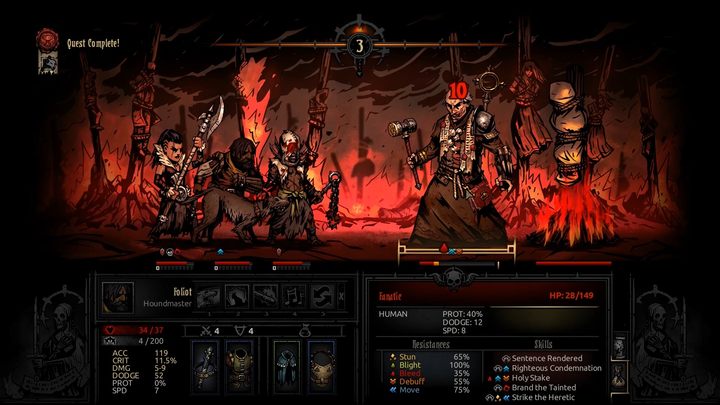 The amount of infected heroes influence the chances of this encounter.

The Crimson Court introduces a variety of new things to the Darkest Dungeon, one of them being the new wandering boss - the Fanatic. Just like the Shambler and the Collector, the Fanatic doesn't have a fixed location in which you can encounter him. Instead, he will hunt parties that have heroes infected with Crimson Curse in them. The chances to encounter the Fanatic increases with the number of infected heroes in the current party. The chances for this to happen are as follows:

As you can see, you can quite easily control the chances of encountering the Fanatic. If you don't want to meet him at all, bring no more than 1 hero infected with the Crimson Curse - this way the enemy won't have a chance to spawn in the dungeon. If you, however, want to meet him at all costs, bring a full 4-man infected party and he will most certainly be summoned. Keep in mind that infected heroes take double damage from his Pyre - bringing a party consisting of 4 infected heroes might not be the best idea, as they will quickly lose health from the Pyre.

Here is some additional information about the Fanatic spawn mechanism: